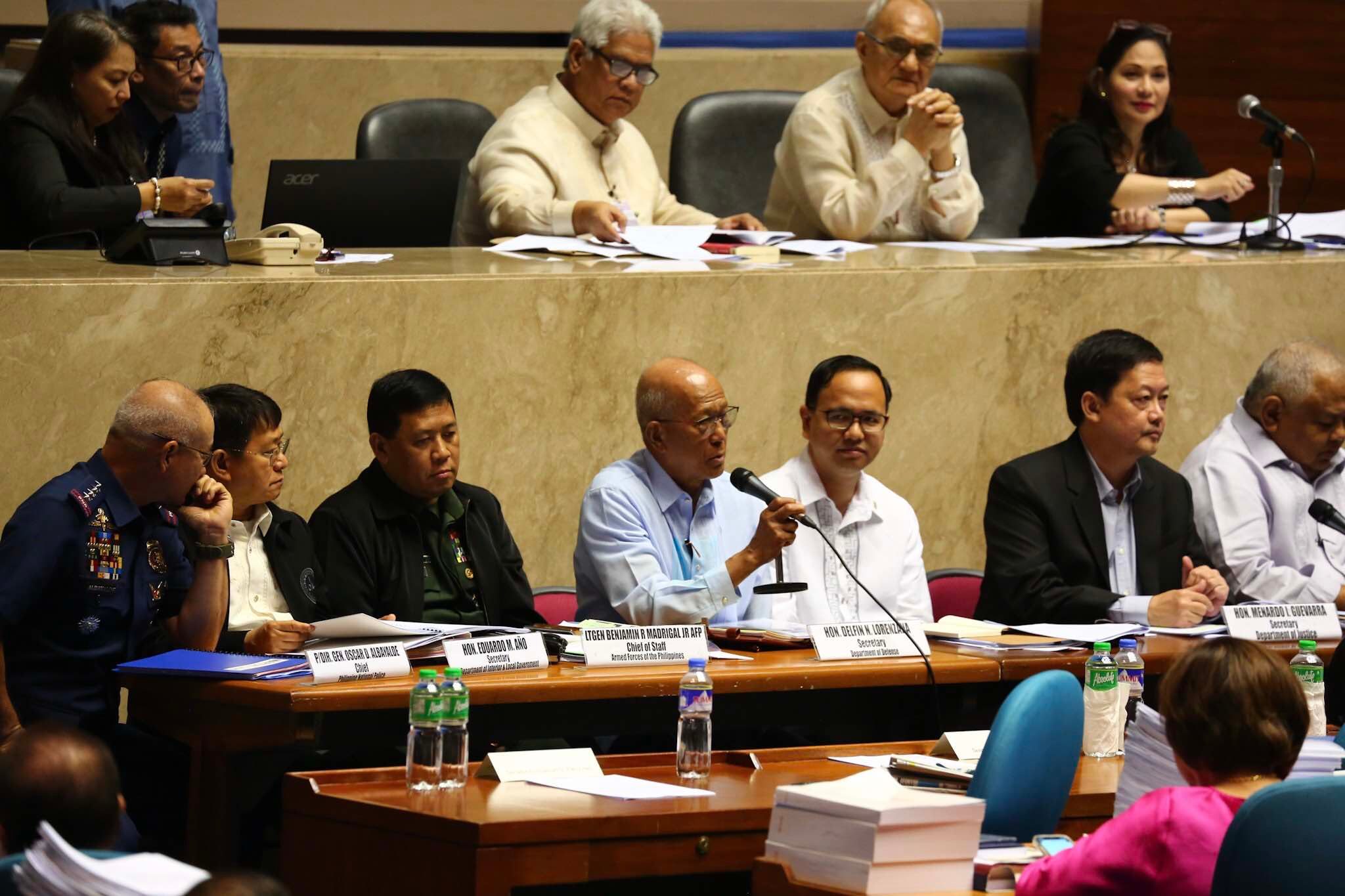 Facebook Twitter Copy URL
Copied
Minority senators slam the government's reasoning that martial law makes it easy for the military, police, and local government units to carry out their mandate

MANILA, Philippines – Defense Secretary Delfin Lorenzana on Wednesday, December 12, assured the public that there will be fair and orderly elections in Mindanao if the region would still be under martial law by then.

Lorenzana gave the assurance on Wednesday, December 12, in response to opposition Senator Risa Hontiveros’ question on the role the military will take in the 2019 elections under martial rule.

“We can assure the people that the military, and the police also, will maintain peace and order and will want to have orderly, peaceful, and honest elections,” Lorenzana said before the joint session convened to discuss President Rodrigo’s request to extend martial law in Mindanao until December 31, 2019. (WATCH: LIVE: Congress joint session on martial law extension in Mindanao for 2019)

The defense chief said Duterte always reminds soldiers to be “neutral” in politics.

“Everytime the President goes to camps, he reminds soldiers to be neutral. They cannot campaign for anybody, for or against. Nasabi na niya ‘yun noon. Nitong nakaraang araw, sinabi na naman niya ‘yun (He already said that before. He reiterated it in the last few days). All we have to do is ensure a peaceful and fair elections,” the defense chief said.

Interior Secretary Eduardo Año said martial law in Mindanao provided the military and the police “a good tool” to do their mandate, and added that local government units and executives support it.

“We say the local chief executives are more cooperative, supportive in our campaign against rebel groups. In fact the feedback from the people is very positive. Now they can go around without fear of being subjected by these lawless elements, rebellious groups…. The checkpoints, though, it [causes] some inconvenience, they feel more secure and safe,” Año said.

“If you are a good citizen, you don’t feel martial law at all,” he added.

But opposition Senator Risa Hontiveros countered Año, saying the Armed Forces of the Philippines and the Philippine National Police do not need any “tool” except the 1987 Constitution.

“Walang ibang kasangkapang kailangan kung hindi ang Konstitutusyon mismo…. Hindi po kinakailangan ang martial law para gawin ng AFP and PNP and kanilang mandato (There is no other tool needed except the Constitution. The AFP and PNP does not need martial law to do their mandate),” Hontiveros said.

Drilon, during his earlier interpellation, also denounced such “disturbing” reasoning.

“These are very disturbing thoughts, very disturbing conclusion. We cannot make martial law as an instrument to make governance more effective, that was never the intention of our framers [of the Constitution],” Drilon said.

This is the third time President Duterte requested to extend the declaration of martial law and the suspension of the privilege of the writ of habeas corpus in Mindanao.

Duterte declared martial law in Mindanao on May 23 2017, following the terrorist siege on Marawi City. Just before martial law lapsed on July 18, 2017, he requested a request a second extension, which Congress granted until December 31, 2017.

In his letter to Congress, which was reiterated by his security officials during joint session, Duterte said “rebellion still persists in Mindanao and that the public safety requires the continuation of martial law in the whole of Mindanao.”

Opposition lawmakers, however, said there is no need for the extension because there is “no actual armed uprising,” as cited in the Supreme Court ruling on Lagman v Medialdea, which upheld Duterte’s Proclamation No. 216.

As of posting, lawmakers are still discussing the merits of Duterte’s request. – Rappler.com