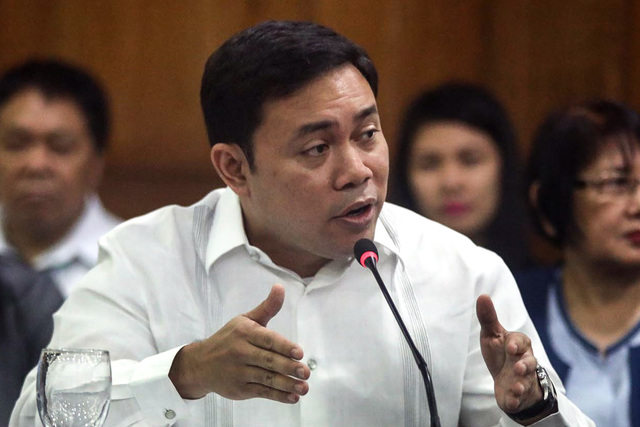 MANILA, Philippines – There are no P75 billion worth of insertions in the proposed P555.7-billion 2019 budget of the Department of Public Works and Highways (DPWH), Secretary Mark Villar said on Tuesday, December 18.

At the sidelines of the Cavitex flyover inauguration, Villar denied that there are such “insertions” but said that the P75 billion went through the budget process.

“At this point the budget process is still ongoing. [The P75 billion is] part of the budgetary process. There’s nothing that is not part of the process,” Villar said.

“The budget is a public document so we’re all aware of what is in the budget. [The 75 billion] is part of the NEP (National Expenditure Program),” he added.

Villar’s statement is contrary to what House Majority Floor Leader Rolando Andaya Jr earlier said –  that the public works chief “was not aware” of the additional funds.

Andaya alleged that the multi-billion-peso funds “were inserted” into DPWH’s proposed budget, which the House leadership previously discovered to have been “misplaced” in several districts’ allocations.

House lawmakers realigned P51 billion worth of DPWH funds to other agencies in September.

When crafting the proposed national budget, agencies follow the “two-tier budget approach.” Budget requirements for ongoing and existing programs are due for Tier 1 while new spending proposals are due for Tier 2.

Diokno earlier explained that they approved P123.9 billion for DPWH for the first tranche and another P356 billion for the second tranche, for a total of P480.2 billion.

The adjustment was included in the NEP, which was passed to the House of Representatives after President Rodrigo Duterte’s 3rd State of the Nation Address in July. It is the basis of the General Appropriations Bill being deliberated by Congress.

“Anytime there’s an allegation of any kind of impropriety, we will investigate. We are not tolerating anyone. Not just CT Leoncio, we are investigating others too,” Villar said in a mix of English and Filipino.

Asked whether a DPWH official was involved in the alleged transactions, Villar said that they will accept any information that will aid their probe.

“If anyone has any evidence, I’d be more than happy to accept it at this point so we can conduct our own investigation. Definitely, we implement a ‘zero tolerance’ policy in this adminstration, and in DPWH, we don’t tolerate corruption,” he said.

Andaya revealed that CT Leoncio Construction and Trading had allegedly bagged billions’ worth of projects in the National Capital Region, Davao City, and 8 other provinces since 2017.

House leaders also claimed that the contractor has ties with Cabinet members, with House Minority Leader Danilo Suarez linking it to Diokno. – Rappler.com