What to expect as gov’t operates on a reenacted budget MANILA, Philippines (UPDATED) – The Philippine government is now operating on a reenacted budget, after lawmakers failed to pass the 2019 national budget on time.

Pending the enactment of the 2019 P3.757-trillion national budget, the Department of Budget and Management (DBM) issued guidelines on how the government will operate in the coming months.

Senators, who received the 2019 General Appropriations Bill (GAB) late, said they expected the budget to be passed by February. (READ: Budget deadlock: Who’s to blame?)

This means the government will have to use the same amount of funds provided under the P3.767-trillion 2018 budget for the first quarter of 2019.

It also means new government projects would have to be delayed and some key services will be affected until the new budget act is signed.

What will be affected?

To cushion the impact of the delayed passage a new budget,  the 1987 Constitution has safeguards that allow the government to operate on a budget which was enacted the previous year, until Congress passes the GAB.

In other countries such as the United States, the non-passage of the national budget for the coming year could lead to a government shutdown, as what is happening now. Because of this situation, US government employees are not receiving salaries from their respective agencies.

As Philippine officials expect the budget to be passed in the first quarter of 2019, the DBM issued Budget Circular 2019-01 giving agencies the power to spend up to 25% of their 2018 budget allocations.

The DBM said the agencies may not spend more than the amount specified in the proposed budget for projects and operations in the first quarter of 2019.

The following will be affected as the national government operates on a reenacted budget.

National government agencies can only spend for staff salaries based on the 2018 level until the budget bill is passed.

This means there will be no adjustments yet in government workers’ salaries. The proposed budget has earmarked  P121.7 billion for the salary increases of civil servants, and military and other uniformed personnel.

The release of the 4th and final tranche of the Salary Standardization Law (SSL), which covers civilian employees, will have to be delayed. For example, teachers who are supposed to get a P20,754-monthly salary starting this year will receive P20,179 – their 2018 salary level – in the meantime.

In the case of uniformed personnel, because of the reenacted budget, First Chief Master Sergeants, Senior Fire/Jail Officers IV, Senior Police Officers IV, and First Master Chief Petty Officers would have to wait a few more months to receive their salary increse amounting to about P3,000, which would have raised their salaries to P35,456.

On top of that, agencies cannot create new hiring positions.

There will be no clothing and uniform allowance for government workers as well.

But Budget Secretary Benjamin Diokno announced in a media briefing Wednesday, January 9 that the salary hike will be “applied retroactively” once the 2019 budget is passed by Congress.

Only maintenance and other operating expenses (MOOE) and capital outlay for regular programs and ongoing foreign-assisted and locally-funded projects can be funded under the reenacted budget.

The operational word is “ongoing” – this means no new projects can be implemented until the budget bill is passed. Only those with allotments under the 2018 budget will have funds for operations.

Similarly, funds for projects that were completed in 2018 cannot be used again.

For example, all pre-construction work for new railway projects in the first quarter will most likely be pushed back to a later date or until funds allotted for them are available under the 2019 budget.

These projects are set for groundbreaking this year. Without the 2019 GAA, work for these projects will be delayed.

On top of that, the Omnibus Election Code prohibits the release, disbursement, and use of public funds during the election period, or from January 13 to June 12.

If the lawmakers pass a national budget without a special provision allowing construction work for capital outlay projects, “Build, Build, Build” infrastructure projects will have to wait until after June 12 to see the light of the day.

In 2019, 10 million households are supposed to receive P300 per month in financial aid under the unconditional cash transfer (UCT) program, particularly subsidies for poor families to cope with the impact of the tax reform law. Pending the passage of the budget bill, these families would continue to receive P200 a month, or the same amount as in 2018. (READ: DSWD chief: P2,400 subsidy not enough to shield poor from TRAIN impact) 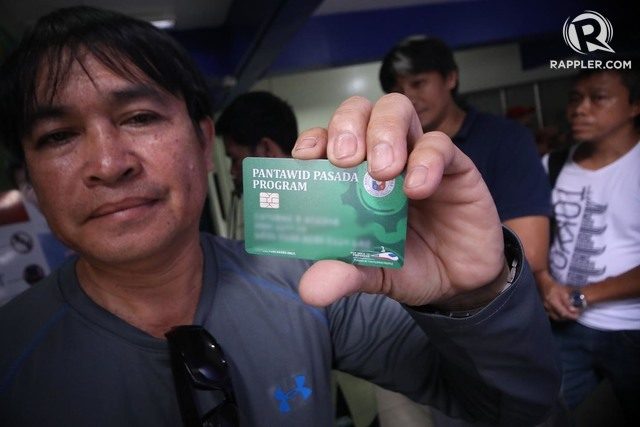 Despite the early submission of the proposed budget to the House of Representatives in July, the Philippine legislature has yet to pass the 2019 GAA.

The delay in the approval of the budget started when House members started opposing the proposed cash-based system for the 2019 budget. (READ: What is cash-based budgeting?)

This happened after the power shift in the House following the assumption of new Speaker Gloria Macapagal Arroyo and Camarines Sur 1st District Representative Rolando Andaya Jr as Majority Floor Leader. Andaya served as budget chief during the Arroyo administration.

Budget Secretary Benjamin Diokno had said that the cash-based set-up would dramatically reduce underspending, and force government agencies to have fiscal discipline. Under then speaker Pantaleon Alvarez, the House was receptive to cash-based budgeting, which was supported by then-House appropriations committee chair Karlo Nograles.

Despite the promise of reform, House deliberations on the proposed budget dragged on due to P50 billion worth of “misplaced” public works funds and “big budget cuts” in some agencies. This prompted the House to convene itself into a committee of the whole to address the impasse.

The “misplaced” funds – which Andaya called DBM “insertions” – were later revealed to be adjustments made in the Department of Public Works and Highways’ budget to ensure that the government spends at least 5% of the gross domestic product for infrastructure.

Another impasse developed when Senator Panfilo Lacson alleged  pork-like funds inserted in districts of lawmakers allied with Arroyo. This happened after the budget bill was transmitted to the Senate.

Andaya then threw a slew of corruption accusations against Diokno, claiming he was reserving funds for Duterte administration allies or that his family members were benefitting from his government position. Diokno had called these allegations “illusory.”

Malacañang had warned Congress to prevent further “unreasonable delays” due to partisan politics, and urged the speedy approval of the 2019 budget.

Diokno, who called reenacted budgets as the “legacy” of the Arroyo administration, said that the DBM will not allow the same situation to prevail for the whole of 2019.

“We will do what we can to minimize the damage to the Philippine economy, particularly public construction. The sooner the 2019 GAA is passed, the better for the economy and the Filipino people. Ramping up our investments on infrastructure and social services will only be sustainable if the budget is authorized by Congress,” he said.

The Senate expects President Rodrigo Duterte to sign the budget bill on February 7.

Will the lawmakers finally agree on the 2019 GAA? How long will the Philippine government operate on a reenacted budget? – Rappler.com