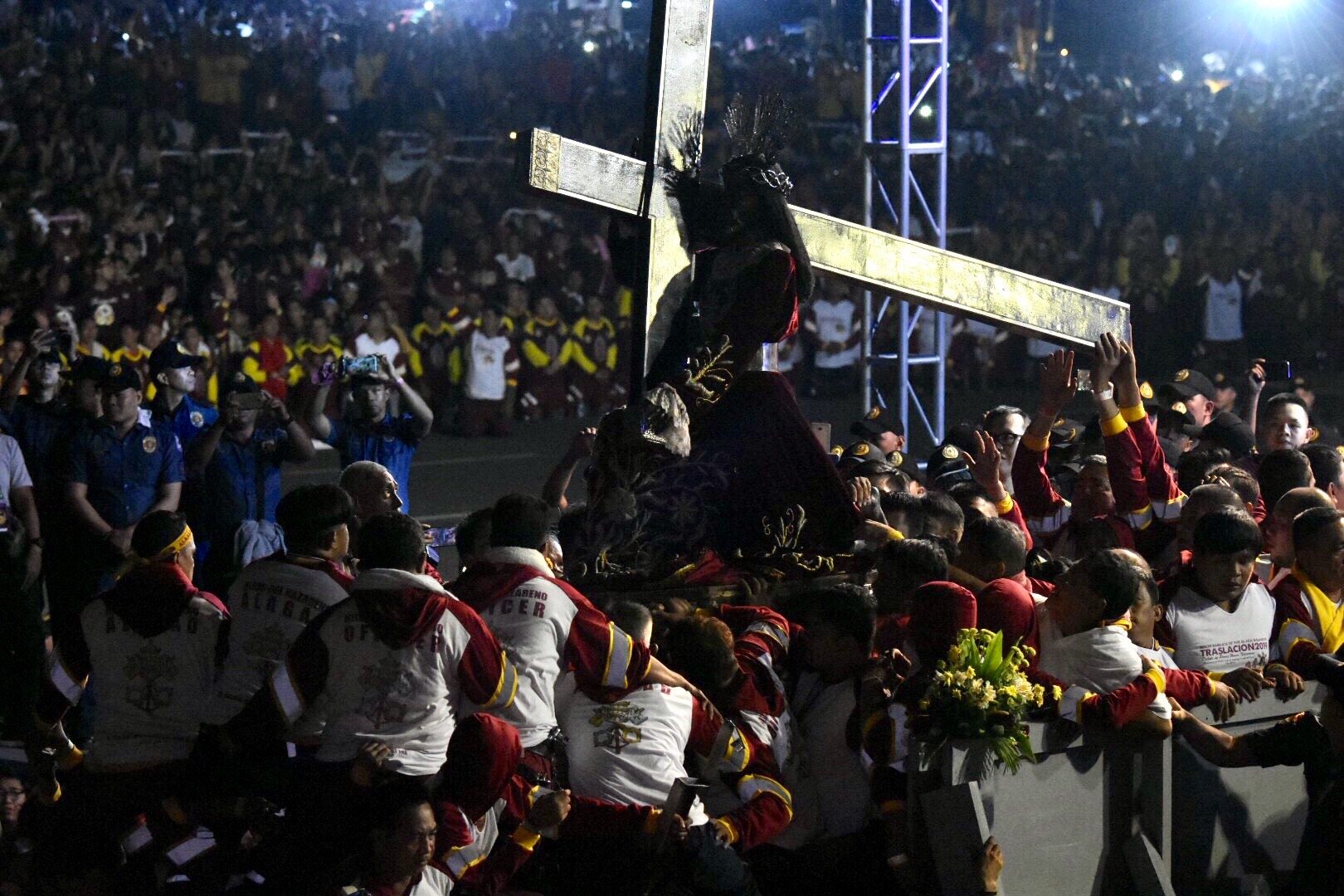 Facebook Twitter Copy URL
Copied
The image of the Black Nazarene started moving out of the Quirino Grandstand at around 5:03 am on Wednesday

MANILA, Philippines – The annual procession of the Black Nazarene, called the Traslacion, began Wednesday morning, January 9, with millions of devotees pinning their hopes on the suffering Christ.

The image of the Black Nazarene started moving out of the Quirino Grandstand at around 5:03 am on Wednesday.

The procession is expected to last until around 2:30 am on Thursday, January 10.

The Philippine National Police said more or less 260,000 devotees were at Quirino Grandstand as of 4 am on Wednesday, an hour before the procession began.

The Feast of the Black Nazarene revolves around the devotion to the suffering Christ, represented by a 17th-century mulatto image of Jesus of Nazareth.

The highlight of the feast is the Traslacion, a nearly 24-hour procession that reenacts the transfer of the Black Nazarene image, also called the Nazareno, to Quiapo Church. The procession begins at Quirino Grandstand in Manila and ends in the Nazareno’s home in Quiapo.

The Feast of the Black Nazarene opened on Wednesday with a Mass led by the Quiapo Church rector, Monsignor Hernando Coronel. The homily was delivered by Manila Archbishop Luis Antonio Cardinal Tagle.

In his homily, Tagle defended devotees  and said their devotion was not fanaticism.

He said a fanatic, on the other hand, does not love.

“Ang panatiko, nang-aano lang ‘yan eh, kumakapit sa isang nagbibigay ng halaga sa akin. Pero ang deboto, hindi iyon ang dahilan. Devoted ka dahil mahal mo siya. ‘Yan ang ipinakita ni Hesus. ‘Yan din ang diwa ng debosyon,” he said. (A fanatic only clings to something that gives value to him. But a devotee does not share the same reasoning. You are devoted because you love him or her. That is what Jesus showed. That is also the value of devotion.)

Even in the Catholic Church, the Nazareno devotion fuels much debate and controversy.

Critics fear that the devotion to the Black Nazarene is turning into fanaticism, with devotees sometimes ending up hurting each other just to touch the Nazarene image in a rowdy annual procession.

Still, millions of devotees continue their devotion, bringing with them prayers for good health and prosperity in their families.

Quiapo Church expects around 5 million devotees to join the Traslacion this year. – Rappler.com