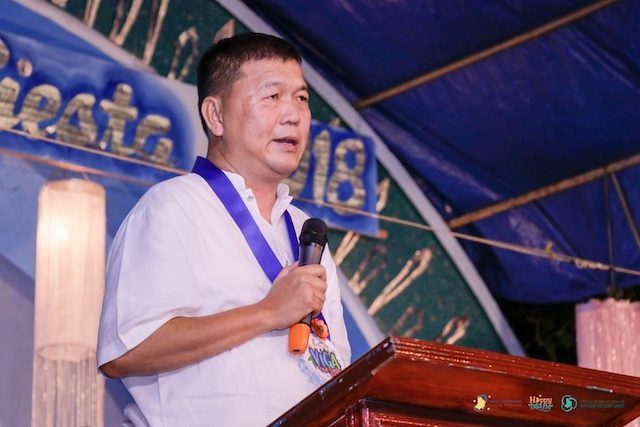 Facebook Twitter Copy URL
Copied
(3rd UPDATE) Catanduanes Governor Joseph Cua, who is running for reelection, is placed under preventive suspension for 6 months in connection with allegations of abuse of authority

Editor’s Note: An earlier version of this story reported that Bato town Mayor Eulogio Rodriguez was also issued a suspension order. We have rectified this error in this updated report.

LEGAZPI CITY, Philippines (3rd UPDATE) – Four months before the elections, the Department of the Interior and Local Government (DILG) has suspended reelectionist Catanduanes Governor Joseph Cua for abuse of authority.

Cua was placed under preventive suspension for 6 months effective Friday, January 11, following the directive of the DILG central office after the Office of the Deputy Ombudsman for Luzon  released its suspension order.

The suspension order issued by DILG Bicol director Anthony Nuyda is in connection to a complaint filed by private citizen Rey Mendez in September 2018.

Last year, Mendez filed a complaint before the Office of the Ombudsman against Cua and Bato town Mayor Eulogio Rodriguez for alleged abuse of authority, conduct prejudicial to the interest of public service, dishonesty and grave misconduct.

In the case of Rodriguez, the Ombudsman said there was a failure to establish strong evidence against the mayor in relation to the complaint.

In his complaint, Mendez said that Cua allowed E.R Construction, allegedly owned by Rodriguez’s wife, to use a vacant government lot without authority from the Sangguniang Panlalawigan.

ER Construction used the government lot to house its supplies and its barracks. The company was building drainage system projects around the Poblacion of Virac town.

The Office of the Ombudsman issued its resolution on the complaint on January 8, and the DILG regional office served the suspension order against Cua on Friday.

“In view of the preventive suspension of Gov. Joseph Cua and immediately upon receipt of this order along with the memorandum, you may already assume as acting governor of your province in accordance with Sec. 46 of R.A. 7160 or the Local Government Code of 1991,” Nuyda said in his memorandum to Abundo on Friday.

Cua said in a statement that he would comply with the preventive suspension order.

He explained that he allowed the use of the vacant lot and a small portion of parking lot owned by the government to help his constituents.

“If my way of being helpful and accommodating the needs of my constituents is the prize of my suspension, this is poignant,” Cua said in a statement in Bicolano posted on his Facebook page.

Cua said he respected the decision of the Office of the Ombudsman, adding that the same body cleared his name after he was implicated in the operation of a shabu laboratory a few years back.

“As I leader, I believe and respect the justice system of the government. I went through a series of challenges and difficulties. But despite of these challenges, you are with me, strongly supporting my battle,” he added in his Facebook post.

Following Cua’s suspension, his political supporters rallied behind him on social media, posting images of blue ribbons to express their strong support for the governor.

Cua said the suspension order will not affect his reelection bid. He is running under the United Nationalist Alliance of former vice president Jejomar Binay, against  Catanduanes Representative Cesar Sarmiento, who is on his third term. – Rappler.com