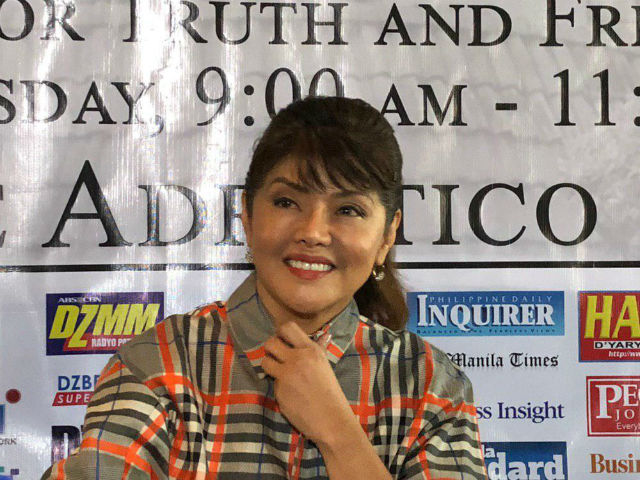 MANILA, Philippines – Ilocos Norte Governor Imee Marcos refused to comment on the findings of the anti-graft court Sandiganbayan that she and her siblings benefited from the illegal Swiss foundations that her mother created and maintained.

On Wednesday, January 16, Marcos was asked by Rappler during a forum in Manila if she were aware of these assets and where they are being kept. (READ: Imee, Bongbong Marcos were beneficiaries of illegal Swiss foundations)

The senatorial aspirant neither confirmed nor denied becoming a beneficiary of the illegal foundations, and merely invoked the sub judice rule.

“Yes, I’m not able to answer because the case is pending in court. It’s best that our lawyers respond to your question…. Yes, I think it’s sub judice,” said Marcos.

The Sandiganbayan 5th Division earlier convicted Marcos’ mother, former first lady and now Ilocos Norte 2nd District Representative Imelda Marcos, of 7 counts of graft over the private foundations in Switzerland that the latter illegally created and maintained while she held government positions from 1968 to 1986.

The court found evidence showing the foundations were used to earn some $200 million – or P10.6 billion in today’s exchange rate – from investments and interests to benefit Imelda, as well as her husband, the late dictator Ferdinand Marcos, and their beneficiaries.

All 3 Marcos children – Imee, former senator Ferdinand “Bongbong” Marcos Jr, and Irene – were specifically named as beneficiaries of the Trinidad Foundation and the Xandy Foundation.

The family matriarch decided to go straight to the Supreme Court to appeal her case. – Rappler.com