MANILA, Philippines (UPDATED) – On Wednesday, February 6, voters in Lanao del Norte and certain areas in Cotabato that want to be part of the new Bangsamoro entity took part in the second plebiscite on the Bangsamoro Organic Law (BOL).

Six towns in Lanao del Norte and 67 barangays (villages) in 7 Cotabato towns filed a petition to be included in the BARMM territory. Their parent municipality or province would also have to agree to their inclusion.

We will update these figures with the official results once the canvassing starts at the Commission on Elections (Comelec) headquarters in Manila.

Earlier on January 21, voters in the 5 provinces comprising the ARMM, as well as in the cities of Cotabato and Isabela, trooped to polling precincts for the first plebiscite on the BOL.

They were asked whether or not they would ratify the BOL.

Voters in Cotabato and Isabela were also asked whether they would like their cities to be included in the BARMM. Cotabato is geographically part of Maguindanao, the most vote-rich province in the ARMM, but is not administratively part of it.

Voters in the rest of Basilan province – which Isabela is geographically part of – were asked if they would want Isabela City in the BARMM.

A total of 2.8 million registered for the Bangsamoro plebiscite, with 2.17 million in the provinces and cities covered by the January 21 polls. A second plebiscite will be conducted in Lanao del Norte and North Cotabato, where more than 600,000 voters registered to decide whether parts of their provinces will be included in the BARMM.

The table below shows the final, official vote count done at the Commission on Elections (Comelec) headquarters in Manila on Friday, January 25. 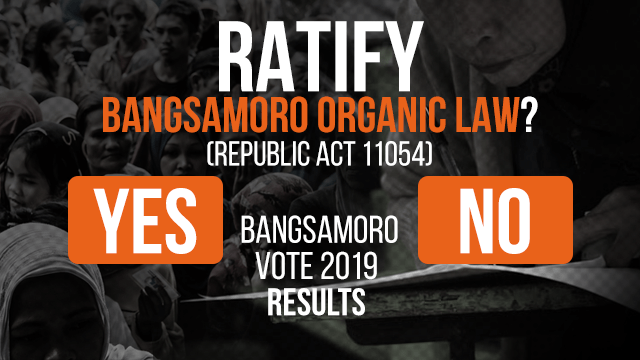