Ateneo president on age of criminal liability: ‘No need for changes, strengthen the law’ 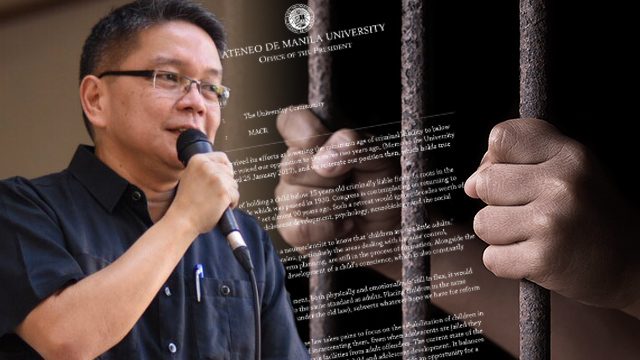 Facebook Twitter Copy URL
Copied
'Let us take our children to school. Let us accompany them to God. Let us not bring them to jail,' Villarin says

“The law does not need to be changed. What needs to be done is strengthen the implementation of the law,” Villarin said in a statement issued on Friday, January 25. (READ: Highlights of House bill lowering criminal liability age to 12)

Lawmakers on Wednesday, January 23, approved House Bill 8858 on 2nd reading. The bill initially proposed to lower the criminal liability age to 9 but the legislators decided to raise it to 12 years old following strong resistance from opposition lawmakers and child rights’ advocates. The members of the Congress also agreed to change the term “criminal” to “social.” (READ: House changes proposed minimum criminal liability age from 9 to 12 years old)

Villarin was voicing out Ateneo’s stand on the move two years ago when former House Speaker Pantaleon Alvarez was pushing for the measure in 2017.

“The University does not support lowering the minimum age of criminal liability. As an institution tasked in the formation of young people, as an institution that takes care of students as young as six years old, we vehemently oppose such a move to criminalize children,” he said in a statement dated January 25, 2017. (READ: Lowering criminal liability age to 12 ‘still attacks children’ – Makabayan)

According to Villarin, the Congress was “contemplating on returning to an outdated standard set almost 90 years ago” and that the lawmakers were ignoring decades worth of research in child and adolescent psychological and social behaviors. (READ: [ANALYSIS] Why jailing kids is not just cruel, it’s stupid too)

The University president stressed that “children are not little adults,” thus, criminalizing them subverts the hope for reform and rehabilitation. (READ: [OPINION] Criminalization is not what we owe our children)

Though resisting the ongoing efforts, Villarin lauded the current Philippine law which focuses on rehabilitating children in conflict with the law instead of incarcerating them.

Republic Act No. 10630 or the act that strengthens the juvenile justice system in the country presently retains the minimum age of criminal liability at 15. It does allow children as young as 12 to be detained in youth care facilities or at Bahay Pag-asa for serious crimes such as rape, murder, and homicide.

“Let us invest ourselves instead in providing all Filipino children with what they need to flourish and succeed…. Let us take our children to school. Let us accompany them to God. Let us not bring them to jail,” he said.

On Friday, the Senate committee on justice, chaired by Senator Richard Gordon also held an inquiry into the proposed lowering of criminal liability age.

Joining other child rights’ advovates in opposing the bill, the University also invites its community to join an indignation protest on Monday, January 28 at the Gate 2.5 of ADMU. – Rappler.com