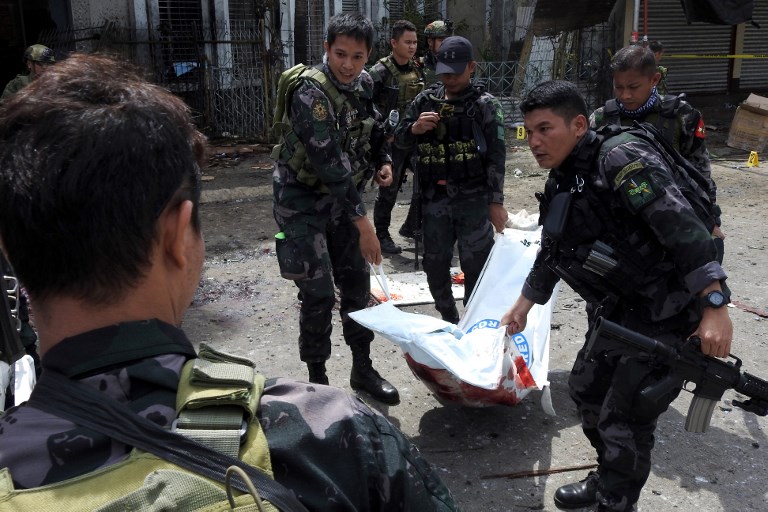 MANILA, Philippines (UPDATED) – Countries condemned the bombing of the Jolo Cathedral that killed at least 23 people and wounded 109 others during a Catholic Mass on Sunday, January 27. The death toll rose as of February 4.

The United States denounced this “senseless violence” and vowed to help the Armed Forces of the Philippines following the bombing. The Islamic State has claimed responsibility for the twin attacks.

The European Union said this is not only a human tragedy but “also an attack against the basic right to practice one’s religion.”

Canada said it “strongly condemns” the cathedral bombing, as Canadian Prime Minister Justin Trudeau said this “is a despicable act of cowardice.”

Pope Francis, leader of the world’s 1.2 billion Catholics, also condemned the attack. “I reiterate my strongest reprobation for this episode of violence which is once again plunging the Christian community into mourning,” the Pope said during the World Youth Day celebrations in Panama.

US Ambassador to the Philippines Sung Kim:

My deepest sympathies for the tragic loss of life in Jolo.  We condemn this senseless violence and we will do everything possible to support the Armed Forces of the Philippines.

The European Union sends its sincere condolences to the many victims of today’s bombing during mass in the Cathedral of Jolo in the southern Philippines.

A human tragedy, this is also an attack against the basic right to practice one’s religion.

The European Union fully supports the Mindanao Peace Process and last week’s plebiscite on greater Bangsamoro regional autonomy. The EU plans to continue such support in the future.

EU Delegation to the Philippines:

The EU Delegation to the Philippines conveys its deepest condolences and sympathies to the families of those who were killed and injured in Jolo, Sulu following the twin blasts that hit a cathedral  this morning of January 27.

“I express my solidarity with  the Filipino people during these trying times,” said European Union Ambassador Franz Jessen.

“Filipinos have always been resilient, steadfast, and collaborative, and I am certain that these values will see them through in this sad situation,” he said.

An attack on people attending Sunday services is a despicable act of cowardice, and Canada strongly condemns today’s cathedral bombing in Jolo, Philippines. My deepest condolences to all the families affected by this tragedy.

The World Bank Philippine Office sends its deepest condolences to the families of those who lost their lives in the recent bombings in Jolo.

We are saddened by these attacks which have marred with violence an otherwise peaceful and successful democratic exercise to ratify the Bangsamoro Organic Law.

The World Bank stands ready to extend support to the Philippines through our longstanding and ongoing partnerships for peace and development in Mindanao.

Japanese Embassy in the Philippines:

Ambassador Koji Haneda offers his sincerest condolences to the victims of two atrocious bombing incidents that occurred on Sunday morning at the Cathedral of Our Lady of Mount Carmel in Jolo, Sulu, and expresses his sympathies to all those affected.

Such terrorist attacks shall never be tolerated. Japan firmly condemns this terrorist act in the strongest terms.

Japan stands with the Philippines when the government and people of the Philippines are overcoming this difficulty in solidarity. Also Japan will continue to support the Philippines in achieving sustainable peace and stability in Mindanao in accordance with the ongoing political transition process under the Bangsamoro Organic Law.

France utterly condemns the attack against the cathedral in Jolo Island last January 27, for which Daesh has claimed responsibility and which killed some 20 people and injured around 100 others, according to the information available.

France extends its condolences to the victims’ families, as well as to the Filipino people. It stands alongside the Philippines in the fight against terrorism.

Let us pray for the victims of the terrorist attack on the Cathedral of Jolo, in the Philippines. May the Lord, Prince of Peace, convert the hearts of the violent, and grant the inhabitants of that region a peaceful coexistence.