What we know so far: Jolo Cathedral bombing 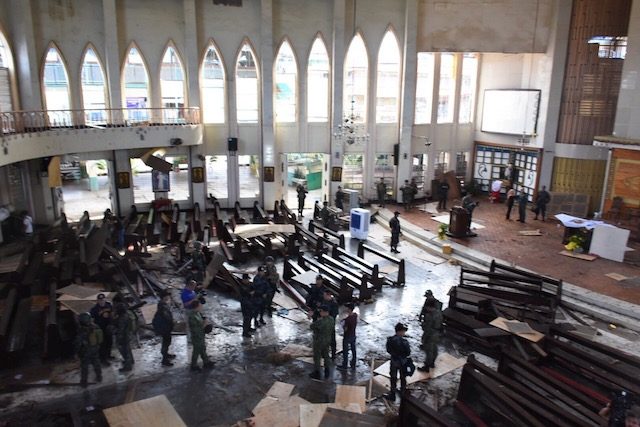 Facebook Twitter Copy URL
Copied
(UPDATED) Who are the victims? What bombs were used? Is there really a lockdown in Jolo?

MANILA, Philippines (UPDATED) – What was supposed to be a place of peaceful worship was turned into a site of carnage on Sunday morning, January 27, when two bombs were detonated consecutively at the Jolo Cathedral in Sulu during Mass.

The attack has been universally condemned in the Philippines and even around the world. It also occurred just two days after the historic ratification of the Bangsamoro Organic Law.

Here’s what we know so far from the influx of information on the tragedy:

Who are the victims? According to the latest tally by the Philippine National Police (PNP) as of February 4, at least 23 people were killed and 109 others injured. Most of the casualties were civilians.

The PNP Autonomous Region in Muslim Mindanao (ARMM) has compiled a list of names of the victims, but declined to release it to the media. They want permission from families first.

How did the attack happen? The attack was executed with two improvised explosive devices (IED) detonated at the Cathedral of Our Lady of Mount Carmel in Jolo. The cathedral was filled with around 100 Mass-goers.

At around 8:58 am, while the Second Reading was being read, the first IED inside the cathedral was detonated, injuring scores of Mass-goers and alarming military and police officers stationed outside.

Just as soldiers and cops rushed to enter the cathedral, the second IED exploded at the church’s entrance. (LIST: Jolo Cathedral bombings, attacks since 2000)

“The second [IED exploded] after around 12 to 15 seconds,” police chief Director General Oscar Albayalde said in an interview with reporters at the blast site the day after the attack.

Most of the security personnel who were hurt by the blast are from the Armed Forces of the Philippines (AFP), as they were tasked, according to Albayalde, to secure the “inner perimeter” of the cathedral. This setup has made AFP personnel closer responders, and now, victims.

What type of bomb was used? So far, the police explosive ordnance disposal squad has been struggling to reach conclusive results, according to Albayalde, because they have not obtained enough fragments from the scene.

He also said they have so far found that the explosive device was covered with “GI sheets,” metal sheets usually used to conceal IEDs. Albayalde said these GI sheets turned into shrapnel after the detonation.

Based on the calculated timing of bomb explosions, police surmised that the IEDs were remotely detonated.

(It really is probably cellphone-detonated because of the timing. The difference in timing of the first bomb and second bomb was around 12 to 15 seconds, so our EOD really suspects that it was electronically-detonated.)

Police are not inclined to believe that any of the explosions was a case of suicide bombing, with Albayalde saying that anyone could have easily been caught wearing explosives with the checkpoints and searches. Who’s behind the attack? The Islamic State group has claimed the attack, but the police and military are still verifying the international terror group’s claim, given its terrorist agenda.

The military earlier announced that they are looking at an Abu Sayyaf faction, the Ajang-Ajang group, as a suspect in the bombing.

In an interview on Monday, National Security Adviser Hermogenes Esperon Jr said they are looking at 6 persons of interest based both on the CCTV footage and prior intelligence. His announcement was confirmed by Defense Secretary Delfin Lorenzana in a text message the same day.

They have not released the CCTV videos as the probe moves forward. ABS-CBN News published a photo of a screenshot of the camera footage, which prompted Albayalde to reportedly say that one of the men in the photos was a brother of a former Abu Sayyaf group leader.

Only known so far as an “Alias Kamah,” he is supposedly the brother of bandit leader Surakah Ingog, an alleged bombmaker slain in Sulu in August 2018.

What comes next? As the probe continues, authorities have intensified security operations across the country.

The PNP on Monday reminded police regional directors that they have been on “heightened” alert since the beginning of the election period on January 13. Metro Manila and the ARMM, meanwhile, have been placed on full alert status.

Lorenzana on Sunday also ordered AFP troops to raise their alert level and “secure all places of worship.”

Police spokesman Senior Superintendent Bernard Banac, meanwhile, urged Joloanos to “go around in their daily life” despite Albayalde saying that there is a lockdown.

Banac clarified in a Monday press briefing that while there is a so-called “lockdown” in Jolo, it is not absolute, given that Joloanos can leave and visitors can come into the municipality. – Rappler.com