Feb 6, 2019 4:38 PM PHT
Mara Cepeda
Facebook Twitter Copy URL
Copied
House Bill 8909, which imposes the death penalty and a P10-million fine on those found with illegal drugs at social gatherings, has been recommitted to the committee on dangerous drugs 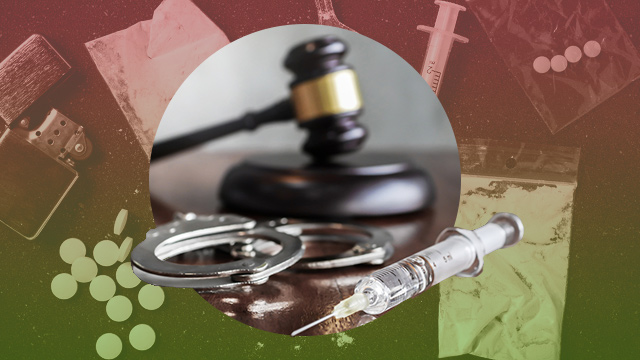 MANILA, Philippines – The House of Representatives on Wednesday, February 6, withdrew its approval of the bill reimposing the death penalty on those caught with illegal drugs at parties or social gatherings.

During the session on Wednesday, February 6, Deputy Majority Leader Wilter Wee Palma II moved to withdraw the 2nd reading as well as the 3rd reading of House Bill (HB) 8909, which had been approved on Monday, February 4.

No lawmaker objected, so the motions were approved. HB 8909 was then recommitted to the committee on dangerous drugs “to introduce necessary amendments thereto.”

HB 8909 was supposed to have hurdled the House already after legislators approved it on 3rd and final reading House Bill (HB) 8909 with a vote of 172-0-0 on Monday, February 4.

House committee on dangerous drugs chairperson Robert Ace Barbers told Rappler  earlier on Wednesday that the measure is “consistent” with the death penalty bill passed by the House in March 2017. (READ: When the House whips go to work for the death penalty)

HB 8909 seeks to amend Republic Act No. 9165 or the Comprehensive Dangerous Drugs Act of 2002 so that any person found possessing illegal drugs during a social gathering “or in the proximate company of at least two persons” would face “life imprisonment to death” and a fine between P500,000 and P10 million.

This is “regardless of the quantity and purity of such dangerous drugs.”

In 2016, 5 young attendees of the Closeup Forever Summer concert died after suffering from a drug overdose. They allegedly took the illegal designer drug called “green amore,” a mixture of methylenedioxymethamphetamine or ecstasy, methamphetamine hydrochloride or shabu, and cialis, a drug used to treat erectile dysfunction. (READ: Music, drugs, and alcohol: Do young Filipinos party to get high?)

Drug possession was not among the drug-related crimes listed under the previously approved death penalty measure or HB 4727. Barbers explained that the provisions of HB 8909 would be in effect only if the bill reimposing the capital punishment in the Philippines becomes a law.

The death penalty measure, however, has remained pending in the Senate since 2017. It is not a priority for senators.

Surprisingly, Speaker Gloria Macapagal Arroyo is among the co-authors of HB 8909. This is despite the Pampanga 2nd District congresswoman thumbing down the bill proposing the death penalty for drug convicts in 2017.