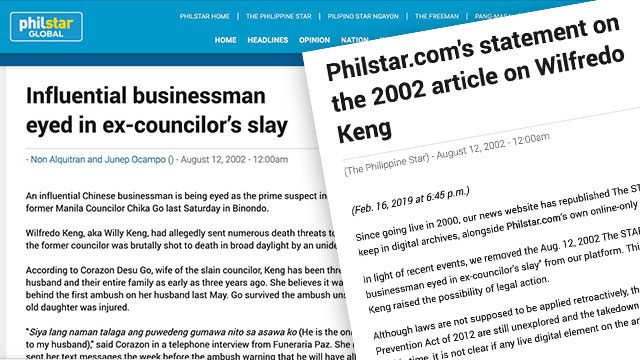 Facebook Twitter Copy URL
Copied
Media observers criticize the move, saying that Philippine Star 'had the choice' to stand its ground in defense of press freedom or retreat under fire

MANILA, Philippines – PhilStar.com, the Philippine Star‘s online news platform, took down a 2002 article on businessman Wilfredo Keng, after the latter “raised the possibility of legal action.”

In a statement Saturday evening, February 16, Philippine Star said that it took down the news report about Keng being eyed as the prime suspect in the ambush-killing of former Manila councilor Chika Go.

“In light of recent events, we removed the August 12, 2002 The Star article titled ‘Influential businessman eyed in ex-councilor’s slay’ from our platform. This was after the camp of Mr Wilfredo Keng raised the possibility of legal action,” the paper said.

But the move by Philippine Star was criticized by media observers.

The 2002 report was cited in the controversial 2012 story written by former Rappler researcher Rey Santos Jr, in which Keng was accused of “smuggling fake cigarettes and granting special investors residence visas to Chinese nationals for a fee.”

The 2012 Rappler story was eventually used by Keng to file a cyber libel case against Santos and Rappler CEO and executive editor Maria Ressa in 2017. The Cybercrime Prevention Act was enacted 4 months after the Rappler story was published. (READ: Despite NBI flip-flop, DOJ to indict Rappler for cyber libel)

“Despite the current atmosphere surrounding freedom of the press and of expression in the region and the world, we remain confident that, in the end, truth shall prevail,” Philippine Star said.

The Star said on Saturday that taking down the article was seen as the “prudent course of action.”

“Although laws are not supposed to be applied retroactively, the scope and bounds of the Cybercrime Prevention Act of 2012 are still unexplored and the takedown was seen as a prudent course of action,” it said. (READ: [ANALYSIS | Deep Dive] Maria Ressa case and the big chill)

“At this time, it is not clear if any live digital element on the article page outside the 17-year-old article could be used against us,” it added.

A relatively “young law,” the Supreme Court stopped its implementation in October 2012 while it tackled several petitions questioning some provisions. In February 2014, the High court clarified parts of it, but did not specify a prescriptive period.

The Department of Justice (DOJ) said that because the cybercrime law is a special law, it falls under Republic Act 3326, which provides for a prescriptive period for special laws.

The DOJ’s interpretation is that cyber libel’s period of prescription should be within 12 years. That means anybody who publishes content online may be sued for cyber libel within 12 years of publication. (READ: Maria Ressa arrest tests the bounds of Philippine cyber libel law)

Ressa was arrested on Wednesday, February 13, in connection with the cyber libel case. She posted a P100,000-bail the following day.

The Philippine Star story reportedly went viral after Ressa’s arrest and was accessible online until Friday morning, February 15. At 6:45 pm on Saturday, Philippine Star updated the same story link, but with their statement.

Lawyers and several groups both here and overseas warned of a “chilling effect” on press freedom brought by Ressa’s arrest.

Vergel Santos of the Center for Media Freedom and Responsibility criticized the move, and said the Philippine Star “had a choice.”

“The Star had a choice: stand its ground in defense of truth, press freedom, and the public interest or retreat under fire. And it decided to retreat even earlier – under mere threat,” Santos told Rappler.

“I believe this clearly shows the chilling effect of the DOJ’s twisting of the law to fit the agenda of muzzling and intimidating critical media,” Espina told Rappler.