PNP gets biggest batch of women recruits in SAF history

Feb 26, 2019 11:24 AM PHT
Rambo Talabong
Facebook Twitter Copy URL
Copied
The Philippine National Police Special Action Force gets 172 women in its first batch of recruitment for 2019, surpassing its previous record in 2014 when they recruited 54 women 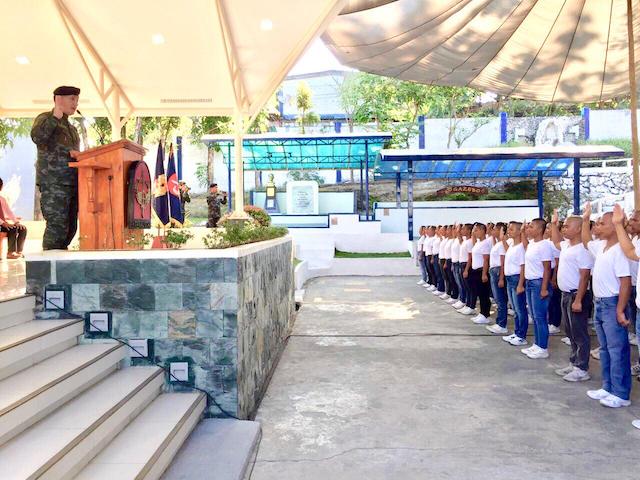 MANILA, Philippines – The elite Special Action Force (SAF) of the Philippine National Police (PNP) got its biggest batch of women recruits since it was founded in 1991.

In the oath taking ceremony of their new recruits on Tuesday, February 26, PNP SAF Director Chief Superintendent Amando Empiso swore in 112 men and 172 women, set to be commandos to be trained against high-profile crimes and terrorism.

According to SAF data, the 172 women recruits surpassed threefold the SAF’s prior record of recruiting 52 women in 2014.

Sporting their buzz cuts, the future men and women of the PNP SAF stood in formation at their headquarters in Camp Bagong Diwa in Taguig City.

Up front, Empiso gave a meaningful warning: “Your trainers will be hard on you, but that is because what lies ahead will be tremendously challenging, and for many, the defining chapter of your lives,” Empiso said.

They are the PNP SAF’s first batch of regular recruits in 2019. More recruits are expected to come in as the PNP aims to form 5 new battalions by 2020 after President Rodrigo Duterte asked for more troops to battle the communist New People’s Army and terrorist groups.

After the oath taking, Empiso led the recruits’ send-off for their SAF training, which will last for about 12 to 14 months. It consists of 6 months of basic recruit course, and the commando training which lasts for 6 to 8 months.

“To our recruits, this is the life that you chose. It’s not risk-free, nor is it always easy, but in my humble opinion, it has always been a life worth living,” Empiso said. – Rappler.com