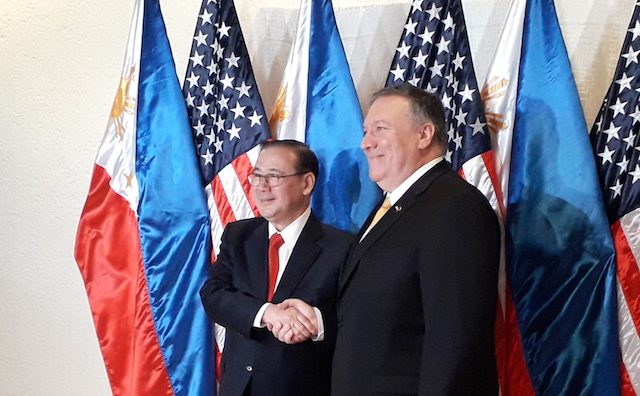 MANILA, Philippines (UPDATED) – The United States on Friday, March 1, assured the Philippines that it will come to its aid if Philippine vessels or forces are attacked in the South China Sea, as provided under their 68-year-old Mutual Defense Treaty (MDT).

US Secretary of State Mike Pompeo said in a news briefing at the Philippines’ Department of Foreign Affairs headquarters that he gave this assurance to top Philippine officials during his overnight Philippine visit.

“We have your back,” Pompeo supposedly told both President Rodrigo Duterte and Foreign Secretary Teodoro Locsin Jr in separate meetings on Thursday night, February 28, and Friday morning, respectively, according to Locsin.

Pompeo’s declaration comes as Philippine Defense Secretary Delfin Lorenzana said he had asked lawyers in his department to review the Philippines’ almost 7-decade mutual defense treaty with the US.

Lorenzana had questioned whether the MDT was still relevant, given the Philippines’ dispute with China in the South China Sea. President Rodrigo Duterte has often publicly expressed doubt that the US, the country’s oldest ally, would ever come to the country’s aid against China’s aggression in the crucial water lane.

“I think it’s huge. This establishes a clear deterrent for the Chinese. It says that there should be no question that violence against Pag-asa (Island) or the Sierra Madre, for instance, would result in a US response,” he told Rappler.

Poling is the director of the Asia Maritime Transparency Initiative (AMTI) of the Center for Strategic and International Studies (CSIS), a think tank based in Washington DC.

Pompeo’s wording is a long-awaited clarification of Article V in the MDT which states that for US to come to the Philippines’ aid, an armed attack must be within its “metropolitan territory.” It would also apply to “Island territories under its jurisdiction in the Pacific Ocean, its armed forces, public vessels or aircraft in the Pacific.”

Locsin said in the Friday press conference that for him, there was no need to review the MDT since “in vagueness lies the best deterrence” to an attack on the Philippines, referring to the wording of the treaty.

He also cited the “repeated assurance of the US” that it will come to the Philippines’ aid “in the event of an act of aggression” against the country.

Threat to PH, US

In his opening statement at the Manila press conference, Pompeo described China’s artificial islands in the South China Sea as a threat to the Philippines, the US, and others traversing the important sea route.

“China’s island-building and military activities in the South China Sea threaten your sovereignty, security, and economic livelihood as well as that of the US,” he said.

The meeting between Pompeo and Locsin began around 10 am and lasted around 30 minutes.

The night before, Pompeo paid a courtesy call on Duterte where they discussed North Korea’s denuclearization and counter-terrorism efforts, among other topics.

Prior to his Manila visit, Pompeo was in Vietnam with US President Donald Trump for the latter’s second summit with North Korean leader Kim Jong-un. (READ: Trump ‘walks’ as North Korea talks end abruptly without deal) – Rappler.com