Apr 17, 2019 11:44 AM PHT
Rappler.com
Facebook Twitter Copy URL
Copied
The Supreme Court, sitting as the Presidential Election Tribunal, has not yet declared the official results of the Marcos-Robredo electoral protest case 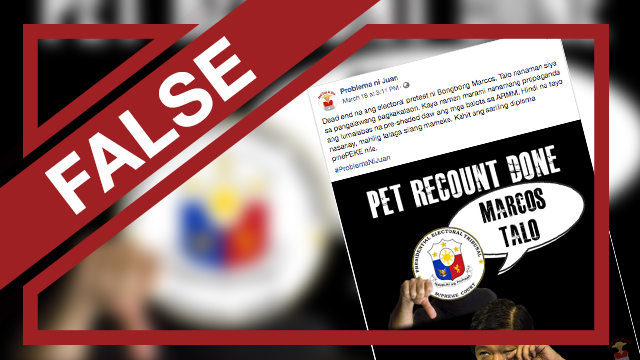 In the post, an edited photo of Marcos is crying due to his supposed defeat. Above him, a speech buble reads “Marcos talo” (Marcos lost), implying that Supreme Court (SC) and the Presidential Electoral Tribunal (PET) have come to a decision. 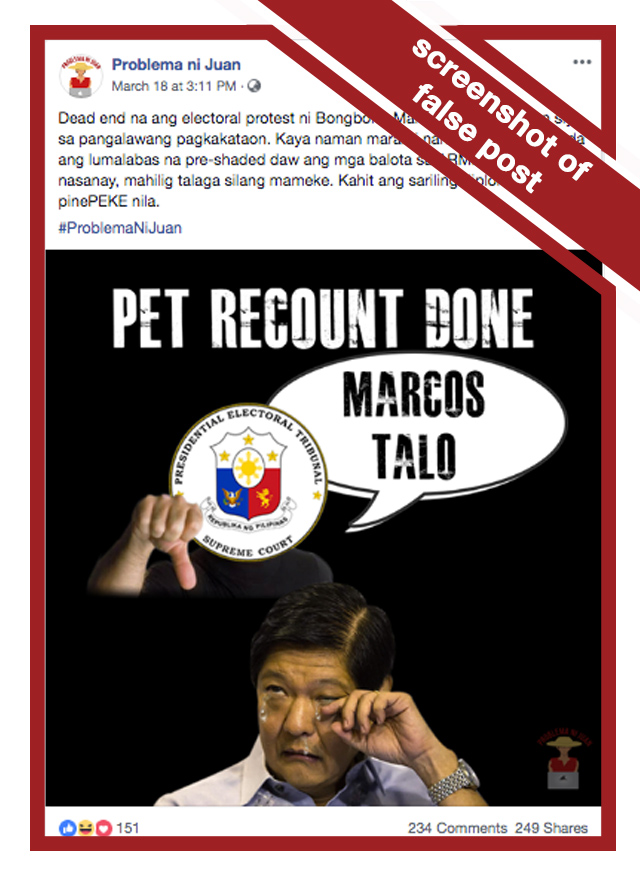 (The electoral protest filed by Bongbong Marcos hit a dead end. It is his second defeat. This is why there is a lot of propaganda alleging that there are pre-shaded ballots in ARMM. Aren’t we used to it yet, [the Marcoses] like to fool people. Even their diplomas are fake.)

The claim was spotted on Facebook Claim Check and it had 600 interactions. The Facebook page has almost 19,000 followers.

The facts: As of posting, the SC, as the Presidential Electoral Tribunal, has not yet declared the official results of Marcos’ electoral protest against Robredo. (READ: TIMELINE: Marcos-Robredo election case)

Only the SC has the authority to declare when the electoral protest ends and what the official results are. (READ: Presidential Electoral Tribunal: What happens to a protest?)

Based on the Official Gazette website, only the SC “shall be the sole judge of all contests relating to the election, returns, and qualifications of the President or Vice- President.”

In a Philippine Star article dated January 22, the PET announced that the poll recount in the 3 pilot provinces is nearing an end. However, it was suspended until January 28 because of wet or damaged ballots. (READ: Supreme Court suspends ballot recount in VP protest)

Since the poll recount for vice-presidency started in April 2018, many versions of misleading claims declaring Marcos or Robredo as the winner have been spread.

Related claims were made in May 2018, when blog sites and influential social media personalities said that Marcos won in official results for the poll recount. (READ: FACT CHECK: No ‘dead voters’ for Robredo in Negros Occidental town)

Recently, another viral Facebook post claimed that the National Board of Canvassers has already declared the results, which showed that Robredo was defeated. – Glenda Marie Castro/Rappler.com