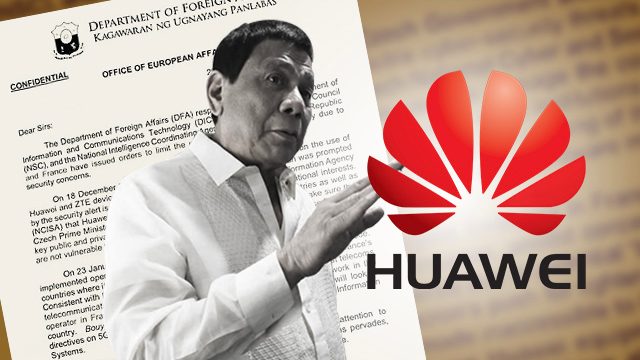 Facebook Twitter Copy URL
Copied
EXCLUSIVE: In an internal memorandum obtained by Rappler, the Department of Foreign Affairs warns the NSC, NICA, and DICT about working with Huawei

MANILA, Philippines – The Department of Foreign Affairs (DFA) has warned President Rodrigo Duterte’s government about the risks of partnering with telecommunications giant Huawei in government projects, an internal memorandum obtained by Rappler showed.

“The Department of Foreign Affairs respectfully informs the Department of Information and Communications Technology (DICT), the National Security Council, and the National Intelligence Coordinating Agency (NICA) that the Czech Republic and France have issued orders to limit the use of Huawei products primarily due to security concerns,” the memorandum dated January 25 read.

It added: “The ban was prompted by the security alert issued by the Czech National Cyber and Security Information Agency (NCISA) that Huawei devices may be used to damage the country’s national interests.”

The DFA then said that France placed restrictions on Huawei as it feared that “China could spy on countries where it has a network presence” of “potential backdoors” in their codes. (READ: European telecoms’ dilemma: Huawei or the highway?)

The memorandum to top security, intelligence, and technology officials was disseminated at a time when Huawei was sinking in deeper controversy after its chief financial officer, Meng Wanzhou, faced US fraud charges related to sanctions-breaking business dealings with Iran.

Just a month before the memo was released, Japan banned Huawei from public procurement.

The memorandum’s release also coincided with the continuous pivot of the Philippines to Asian superpower China as it snubs its older allies from the West. Huawei and the Philippine government

Since the pivot to China, Huawei has seen itself in more frequent appearances in projects by the Philippine government.

The biggest one of them is the Safe Philippines Project, a P20-billion-worth, 12,000-camera surveillance system project that seeks “efficient management of public order, security and safety” in the Philippines with the help of China Telecom.

While China Telecom won the bidding for the massive security project, Huawei will provide the equipment.

The Department of the Interior and Local Government (DILG) has defended the setup, with Secretary Eduardo Año repeatedly claiming that they will build “firewalls” that would shut out possible Chinese hackers. It has also emphasized that no formal complaints have been lodged against Huawei in the Philippines. (READ: Huawei rejects Western security fears, says ‘no evidence’)

Huawei has also done the Philippine police a big favor, standing as its biggest sponsor in the Philippine National Police’s (PNP) anti-cybercrime summit in March. Police officials claimed that the donation would not result in an undue advantage in security or procurement.

But data privacy group Foundation for Media Alternatives has flagged partnerships with Huawei, especially in light of the internal memorandum which already warns of risks working with the tech titan.

“Having the country’s main law enforcement authority (i.e., PNP) establish or maintain any form of affiliation or link to a Chinese company shows, at best, poor appreciation by the government of its mandate, or at worst, a reckless approach to safeguarding the welfare and interest of the country from all perceived foreign threats,” the group said. – Rappler.com