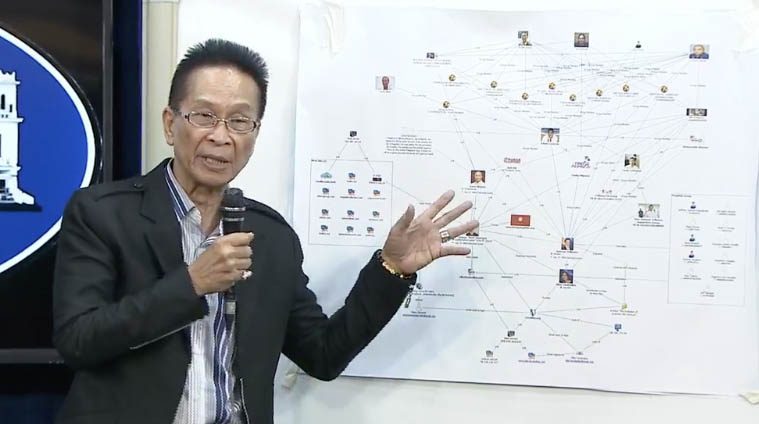 Facebook Twitter Copy URL
Copied
(UPDATED) The Liberal Party, Magdalo, journalists, and media organizations are tagged as part of a 'conspiracy' to boost the Senate bids of Otso Diretso candidates

MANILA, Philippines (UPDATED) – Malacañang released a new set of diagrams as further elaboration of its claim that groups allied with the opposition are “conspiring” against President Rodrigo Duterte.

Presidential Spokesperson Salvador Panelo and Presidential Communications Secretary Martin Andanar presented the diagrams, along with a PowerPoint presentation, on Wednesday, May 8, in Malacañang.

“The President has received intelligence information that shows there is a deliberate conspiracy between certain groups to discredit this administration for the purpose of the election. The groups, according to this information, seem to be the Liberal Party, the yellows, Magdalos, and media outfits as well as organizations indicated in the matrix,” said Panelo.

The spokesman, however, also said some individuals are in the diagrams because they spread anti-Duterte sentiments online.

The diagrams include “advocates on social media dishing out anti-Duterte statements and sentiments and validated to be allied with the Liberal Party,” he said.

Major allegations in the diagrams and presentation are the following:

Yet, as with the first “ouster plot matrix,” Panelo could not say where the diagrams came from.

Though at first he said it was “intelligence information,” he could not identify which intelligence or law enforcement agencies provided Duterte with the documents.

When asked if it were a foreign entity that gave Duterte the information, he said, “I do not know.”

“The President has many sources. You have to ask him yourself,” he told reporters. (READ: Malacañang’s copy of ‘ouster matrix’ came from unknown number)

Are those in the diagrams committing a crime? Panelo said it will be up to Justice Secretary Menardo Guevarra to determine if there is sufficient evidence to file cases against the persons included in the images.

(If what they are doing is black propaganda, it means it’s libelous. The moment the PNP and other law enforcement agencies have sufficient evidence, cases will be filed against all of them.)

Right after the release of the first “ouster plot” diagram by Malacañang, Guevarra had said there was not enough basis at the time to probe journalists and a lawyers’ group named in it. (READ: ‘False, garbage’ – Maria Ressa, Ellen Tordesillas, PCIJ on Duterte ‘ouster plot’)

Panelo denied the release of the diagrams is a crackdown on legitimate dissent.

When asked how Malacañang differentiates between a “conspiracy” to destabilize the government and legitimate criticism, he said, “The difference is that those I mentioned, they have linkages to those responsible [for] black propaganda, ibig sabihin, hindi na sila legitimate (this means, they are no longer legitimate).”

He denied the Palace was itself engaging in black propaganda by releasing the diagrams. (READ: Groups hit ‘pattern of attacks’ against democratic institutions)

“It can never be a crackdown. This government cannot crack down on those who are practicing the freedom of expression,” he said. (READ: Philippine media under attack: Press freedom after 2 years of Duterte)

Duterte has a track record of targeting individuals and groups who openly criticize him. He has attempted to put Trillanes in jail, branded critical media outlets as “fake news” or enablers of “black propaganda,” banned Rappler reporters from covering his activities, and hurled threats at human rights experts who questioned his policies. – Rappler.com