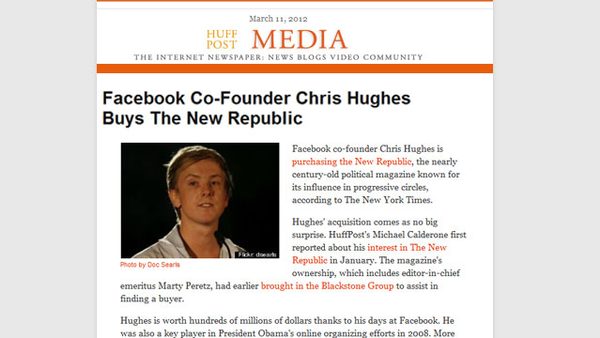 Facebook co-founder Chris Hughes now controls one of the most influential political magazines in the US.

Hughes, 28, the Harvard gay geek who was the roommate and business partner of Mark Zuckerberg during the early days of the social media giant, bought a majority stake in The New Republic magazine, a nearly century-old bastion of liberal political thought.

He announced the move in an online letter to readers of the publication where he will assume the titles of publisher and editor-in-chief, said the Web “has introduced a competitive, and some might argue hostile, landscape for long, in-depth, resource-intensive journalism.

After leaving Facebook in 2007–and likely earn millions of dollars when Facebook lists its shares on a US stock market soon–he played a key role in organizing President Obama’s 2008 online organizing efforts then launched a social network aimed at fighting poverty.

Read more on HuffingtonPost and Vanity Fair and the New Yorker.