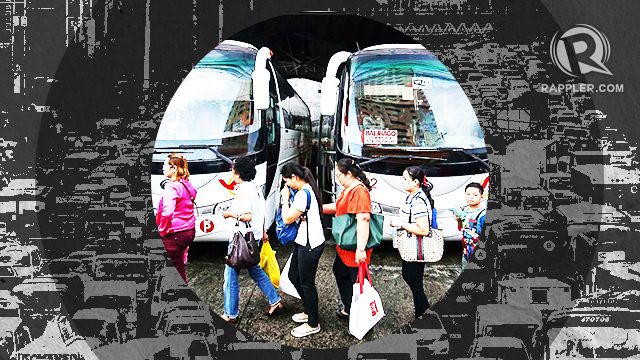 Facebook Twitter Copy URL
Copied
Transport economist Jedd Ugay says that if MMDA wants to reduce traffic congestion, the effect of the provincial bus ban is the 'total opposite'

MANILA, Philippines –  Implementing the ban on provincial buses along EDSA would only worsen traffic congestion, an expert said.

In an interview with Rappler, transport economist Jedd Ugay said that the provincial bus ban is not economical and would push Filipinos to shift to a more “unsustainable” mode of transportation.

“In macroeconomics, alighting at the terminal is an additional unnecessary trip kilometers. It will cause more traffic for everyone,” Ugay said.

“The government should look at the bigger picture, not only improving traffic flow, but reducing the vehicle volume. The best way to reduce that is to shift people from using private vehicle to more sustainable modes of transportation which is public transport,” he said.

The Metropolitan Manila Development Authority (MMDA) is set to close provincial bus terminals along EDSA this June and has since prohibited the said drivers to drop off passengers along the main thoroughfare in a bid to “reduce traffic congestion.”

That’s where commuters should ride the city buses and jeepneys that would bring them to their desired destinations, the MMDA earlier said.

But Ugay said that if the traffic agency aims to reduce traffic congestion with this policy, the effect of the ban is the “total opposite.”

“If your aim is to reduce traffic congestion, this is not what you should do. You have to reduce every trip kilometer generated per commute,” he said.

“Once you reduce convenience of commuting, you’re discouraging people to use public transport and rather have them bring their own private vehicles, which again, would result to more private vehicles on the road,” he added.

With the MMDA policy, commuters aired their frustration online, saying that the ban is “anti-commuter.”

Bicol lawmakers even filed petitions before the Supreme Court to stop the implementation of the policy, arguing that it is “utterly oppressive and unfair.”

Ugay echoed the same sentiment that commute will be longer as an additional “trip kilometer” is generated.

“For example, I’m going to ride a bus in Batangas and I want to go to Makati. Instead of going directly to Makati, I still have to ride again at an interchange. There’s still waiting time to buy a ticket and then boarding the vehicle. Instead of having a shorter trip, it became longer. If the terminal is farther to your destination, you would have to backtrack that additional trip kilometers,” he added.

Ugay, a former project development officer at the Department of Transportation, explained that the policy does not match the “origin-destination pattern” of commuters.

“Normally for people, hindi lang naman point-to-point ang gusto niyang puntahan (they don’t always want to travel point-to-point only). Although it might serve a fraction of the total population, but they still want to board from somewhere in the middle of the route and alight in the middle too,” he said.

According to MMDA, there are 12,000 buses in Metro Manila, 8,000 of which are provincial buses. The remaining 4,000 constitutes the city buses.

“There are more costs with this ban. You have to add congestion, pollution, chance for road accident, fuel cost or fare, and the most expensive of all, the time costs; when you board another vehicle from the terminal to your destination,” Ugay said.

In a previous interview with Rappler, MMDA spokesperson Celine Pialago defended the policy saying that only 3% of the total vehicle volume count will be affected by the ban.

“MMDA is looking from a vehicle perspective, but you have to compute the number of people using the buses and the economic benefit of that. Private vehicles has more share of road space along EDSA but they only carry less people, as compared to buses,” Ugay said.

In Albay 2nd district Representative Joey Salceda’s petition before the High Court, he said that the Land Transportation Franchising and Regulatory Board is “expected” to give thousands of permits to the following vehicles:

On top of that, ride-hailing giant Grab Philippines is urging the LTFRB to open 15,000 more slots for franchise applications.

But increasing the road share of private vehicles and two stop off points would benefit less commuters, Ugay said.

“You need to increase the throughput of a road. For example, a lane can carry 2,000 vehicles but if you change the occupancy of each vehicle, that’s how you can move more people,” he said.

For him, the government should focus on more sustainable policies.

“Travel time and safety are the top things people think during commute. If you won’t get late because of commute, you are more enticed to make the shift to use public transportation. People are willing, but they don’t want to wait,” he said.

While infrastructure and rehabilitation works on public transportation are on the way, Ugay said that the government should also focus to making the roads bike- and pedestrian-friendly.

“Improving sidewalks and providing bike lanes are easy and quick to implement. Once people see that these are prioritized, more and more people will use bikes too. It would use up less space and not as dangerous as cars in terms of road safety and don’t emit pollutants,” he said.

Ugay is also a co-founder of Alt Mobility, a group that promotes sustainable transportation. One of Alt Mobility’s platforms is the Facebook group “How’s Your Byahe, Bes?” (How’s your travel, friend?), which brings lively discussions on commute, policies, and anything related to transportation.