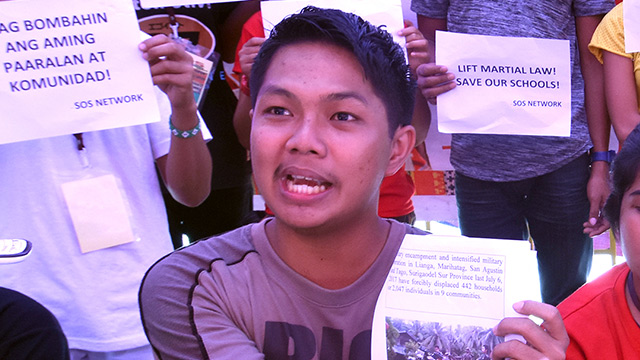 CAGAYAN DE ORO CITY, Philippines (UPDATED) – The arrest of journalist Fidelina Margarita Valle at the Laguindingan Aiport on Sunday, June 9, by the Criminal Investigation and Detection Group-Region 9 (CIDG-9) is a botched enforced disappearance, according to her son Rius Valle.

The elder Valle was waiting for her flight on her way home to Davao City after attending a training workshop in Pagadian City when elements from the CIDG-9, soldiers from the 102nd Infantry Brigade of the Philippine Army, and members of the Laguindingan Police arrested Valle.

She was then taken back to Pagadian City where she was held and incummunicado for 6 hours.

Rius said they were only able to contact her at 6 pm on June 9. Rius added her mother was traumatized by the experience.

Rius said her mother’s arrest, which the police later claimed was a case of mistaken identity, was a botched enforced disappearance.

“We will never buy that crap,” Rius said.

The arrest warrant for murder and destruction of property was issued by Calamba, Misamis Occidental Regional Trial Court branch 36 judge Bernadette Paredes Encinareal on December 29, 2011. There was no bail recommened for the charges.

“Rest assured we wil stay vigilant, we will hold them (CIDG) accountable. If they can do this to a journalist, what will prevent them from doing this to an ordinary citizen”,”Rius Valle said.

RIus added that they are in the process of documenting the arrest, including getting copies of the warrant of arrest “before they can insert the original name to Elsa Renton,” Rius said.

The National Union of Journalists of the Philippines said Valle’s arrest was not a lawful operation but instead the criminal abduction of a journalist.

Renton, an alleged communist party member, has standing warrants of arrest for arson and multiple murder, along with quadruple frustrated murder and damage to government property.

Valle was released only 12 hours after the arrest at around 9:30 pm, and also after she was brought 200 kilometers away from the airport to Pagadian City.

“The National Union of Journalists of the Philippines strongly condemns Valle’s abduction and the CIDG’s violation of her basic rights,” the NUJP said.

The NUJP also explained, “How else do authorities explain why Ms. Valle was held incommunicado for hours even as the police issued a statement saying she was facing multiple crimes from a decade ago, only to admit they had the wrong person?” (READ: ‘It happens’: PNP downplays wrong arrest of Davao journalist)

“And the truth is that Ms. Valle’s abduction could have had dire, even fatal, consequences. There is no lack of victims of extrajudicial killings and enforced disappearances to drive home this point,” the NUJP went on to say.

It added, “We demand that the police and military personnel involved in this inexcusable travesty and their superiors be prosecuted and punished to the fullest extent of the law.”

AlterMidya on Monday denounced what they called the “unlawful arrest” of Valle, saying it was a “clear case of harassment” as well as an attempt to “silence journalists” like her.

“The lame excuse of mistaken identity does not mitigate the illegal and preposterous arrest of Valle, and the numerous violations of due process by the CIDG. If anything, the arrest only demonstrates the rampant abuse of power and impunity by state forces in Mindanao, and sends the message that they can take anyone prisoner,” AlterMidya said in a statement.