Residents of island in Albay struggle to get daily water supply ALBAY, Philippines – Jason Burac wakes up at 1:30 am  to begin his most important task of the day: getting enough water for his large household.

Burac, a father of 5, lives in Sitio Malictay in Barangay Hacienda, San Miguel Island in Tabaco City.  Many residents in his island have to make a journey – by land or by sea – to another water source as the aquifers and wells in their areas have dried up because of the prolonged El Niño phenomenon.

Burac walks for about 150 meters from his home to the shore, lugging with him several empty water containers and black hose 5 feet long. He loads the containers on motorized boat and heads to the Pahuladan aquifer with fellow villager Richie Bobiles, who also has big water containers with him.

The Pahuladan well is one of the few surviving aquifers in San Miguel Island, which has a population of 13,116, based on the 2015 census.

Burac says most of the wells in the island have dried up since February. He is thankful that someone has come to their island to document their daily struggle with water supply, and hopes people in power would take notice, and do something.

“Thank you for visiting our place. At least, you’ve seen our situation, the condition of the islanders how difficult it was. Almost all water sources in our place dried up due to prolonged drought. We’re enduring 5 months of sleepless nights and almost fighting for water. We’re hoping that through you, politicians and the government will know our plight for them to respond to our needs on water shortage,” Jason told Rappler in Bicolano. 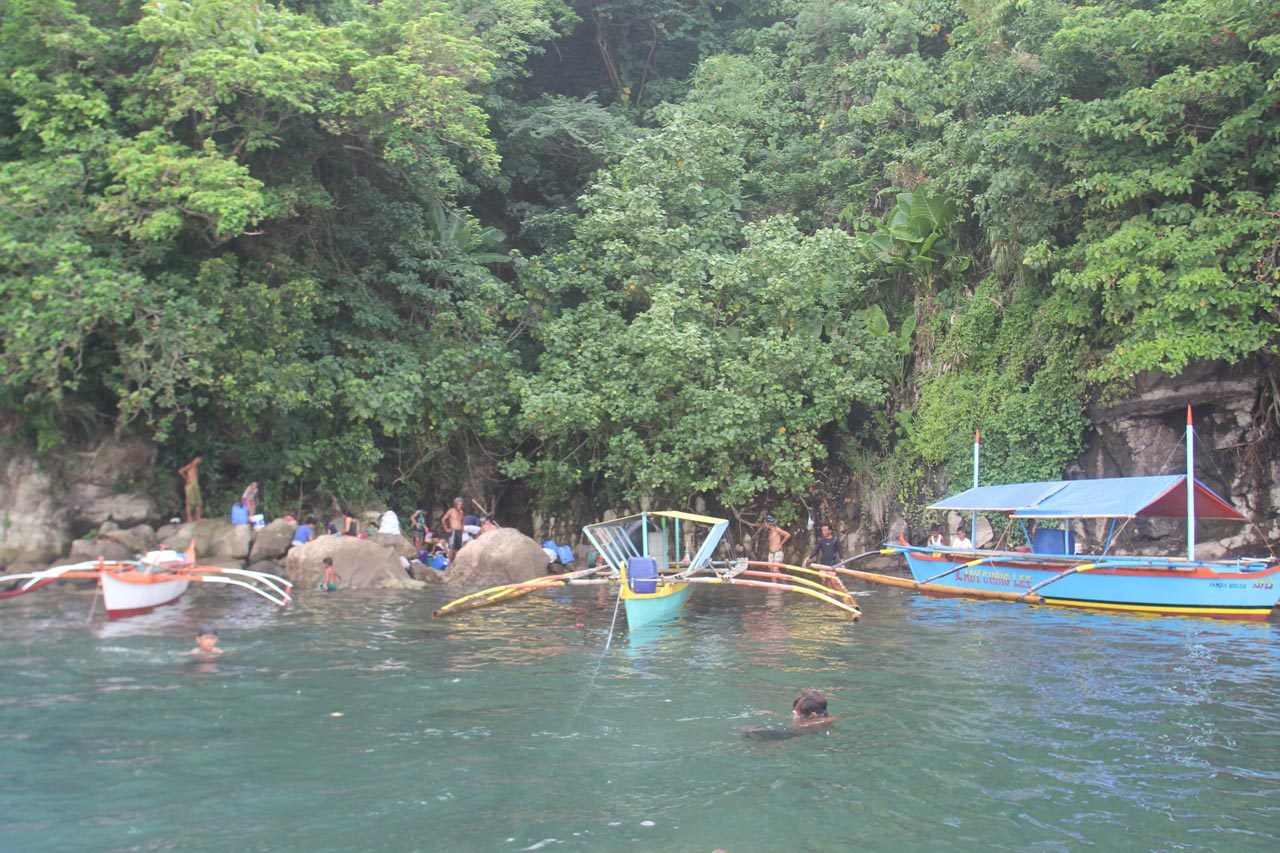 Burac and Bobiles are lucky – they are the first to arrive at the Pahuladan aquifer that day. Burac uses his hose to fill 8 water containers while Bobiles fills 6 containers using an improvised dipper.

A few minutes later, another man on a small boat can be seen paddling hard in the distance, fighting the strong current.

The newcomer patiently waits until the two other men finish filling their containers. But by the time Burac and Bobiles were done, the well was nearly empty. The other man – 29-year-old Jerwin Brutas – will have to wait for a few hours to wait for the well to fill up again.

By 4 am, Burac and Bobiles are heading back home. They say others from their village will be at the Pahuladan well to get their supply but they may not get as much water as the two men did. The sleepless night has paid off, they say.

They also say that the islanders’ water woes are expected to be aggravated by the opening of school.

Freddie Burce, a resident of Barangay Hacienda and chairman of the Asosasyon kan Conservanistang Paraoma asin Parasira (Association of Conservationist Farmers and Fishers), says another water source on the island is the Nagmuri aquifer which can be developed with the help of the government.

“If the Nagmuri aquifer will be developed through the help of new technology and the government, it can provide sustainable drinking water to the residents of the island as long as the remaining forest around the water source will be preserved,” Burce said.

The Nagmuri aquifer is located in the mountain. San Miguel residents have installed a bamboo pipe to channel the water from the mountain to the shore, where people can have easier access. The Nagmuri aquifer provides water not only to the people of San Miguel Island but also to the neighboring island of Cagraray. At the Nagmuri water source, people bathe, wash their clothes, and stock up on water to be brought home.

San Miguel and Cagraray Island are both located in the Lagonoy Gulf.

Tabaco City Mayor Krisel Lagman-Luistro earlier said that San Miguel residents can get water from the Tabaco mainland for free until their wells fill up again. The islanders, however, want a sustainable water source at home rather then go to the mainland, which they say is expensive and impractical.

Arnel Garcia, regional director of the Department of Social Welfare and Development (DSWD) in Bicol says that even without the dry spell, about 2.5 million Filipinos do not have access to safe drinking water.

In Bicol, 187,673 people do not have safe drinking water and 30% of more than 5 million Bicolanos get water from dug wells.

“Water is one of the most important substances on earth. It is a lifeline that bathes and feeds us. Having safe drinking water is essential to humans and other life forms,” Garcia says. (READ: [OPINION] Water is a human right)

The United Nations (UN) high-level panel on the Post-2015 Development Agenda has indicated that 2.5 billion people do not have access to safe water.

Michel Jarraud, UN Water and World Meteorological Organization secretary general, said during the UN High Panel discussion held at UN University(UNU) in Tokyo, Japan where this reporter was one of the UNU 2015 journalism fellows, said that “water stress” will continue to haunt the planet 50 years from now.

“We need to have new technology. Research and development is the key element of addressing poverty, water and energy challenges,” Jarraud said.

Meanwhile, Ako Bicol Representative Alfredo Garbin Jr told Rappler that their party will prioritize the water problem in the country specifically in the countryside, in the 18th Congress.

“Water shortage will be our biggest problem in the coming decades not only in Philippines but in the entire world. This could…even lead to possible chaos in the global scenario if we don’t do any solution and action today,” Garbin said. – Rappler.com

This story was produced with the  support of Internews Europe in the framework of the Internews Environmental Journalism Network (EJN) Asia Pacific 2017-2021.