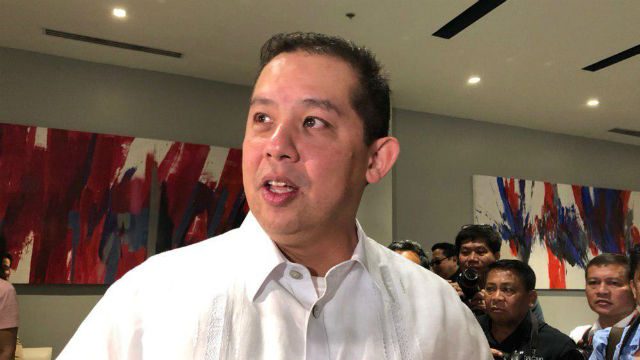 MANILA, Philippines – Leyte 1st District representative-elect Martin Romualdez on Wednesday, June 26, called himself a “strong contender” for the speakership, unfazed by the manifesto of support for a rival candidate supposedly backed by 4 major blocs in the House of Representatives, including the ruling party.

In a press conference held in a venue where he met  with 40 lawmakers from different political parties, Romualdez expressed confidence that he would win the battle for Speaker of the 18th Congress.

“We are a contender. We are serious and we believe we are strong contender. But this matter will still be decided on July 22nd. And I will be the last one to be presumptuous to say that I have more than the numbers to become the Speaker,” Romualdez told reporters at a hotel in Quezon City, in response to questions.

“One hundred seventy-eight signed because we have a pledge of commitment, something like that, as of yesterday,” Salceda said in an ambush interview.

Salceda conceded, however, that other House members likely also gave their commitment to Romualdez’s rival, Marinduque Representative Lord Allan Velasco, which may explain why the latter’s camp claimed that at least 180 legislators backed their bet .

Another Romualdez ally, Anak Kalusugan representative-elect Mike Defensor, said they have the numbers to secure the speakership for Romualdez.

On Wednesday, Romualdez spoke inside a room where lawmakers from the party-list bloc and 5 major political parties gathered to know which legislative priorities of President Rodrigo Duterte the speakership candidate would push for if he won the race.

LOOK: The 39 lawmakers who met with Romualdez during the multi-party caucus he led today pic.twitter.com/InOvq6Nht8

Several PDP-Laban and party-list lawmakers attended Romualdez’s caucus even if the leadership of their blocs already signed the manifesto favoring Velasco.

Romualdez, however, refused to call the meeting a show of force.

“This is a gathering of congressmen and congresswomen of like minds who want to work together hand in hand in the 18th Congress. And we’re just meeting here and invited you to show you how dedicated, how committed the congressmen-elect of the 18th Congress are to serve the Filipino people,” he said. ‘Give back’ to congressmen after Yolanda

Romualdez said that should he become Speaker, he planned to “give back” to House members for helping Eastern Visayas recover from the destruction of Super Typhoon Yolanda (Haiyan) in 2013.

(In truth, I owe our congressmen a lot…. We came from Yolanda. And we were crushed then… Being there in full force, giving unlimited, unconditional unequivocal support – that was what our congressmen did for us.)

“I want to give back. Dahil po sa inyong lahat, nakabangon ‘di lang ang Tacloban pero buong Region 8. Maraming-maraming salamat po (Because of you, Tacloban and the rest of Region 8 managed to rise again. Thank you very, very much),” he added.

Responding to questions, Romualdez said he was not open to term-sharing as Speaker, a scenario floated by another speakership candidate, Taguig City-Pateros Representative Alan Peter Cayetano.

“I believe that it’s a matter best kept out of the halls of Congress. We have a peculiar situation unlike that in the Senate. That practice is more viable in the Senate because they have a 6-year term with a break of 3 years. That allows for such a process,” said Romualdez.

“In the House, that may not be successful. So I would prefer that the scneario not be [placed] among us,” he added.

Many legislators have hoped that President Rodrigo Duterte would name his candidate for Speaker but the President said on Tuesday, June 25, that he would leave the matter for lawmakers to decide for themselves.

Duterte even said outgoing Speaker and Pampanga 2nd District Representative Gloria Macapagal Arroyo, an ally and party mate of Romualdez, should chose her successor instead.

Romualdez is president of Lakas-CMD. – Rappler.com