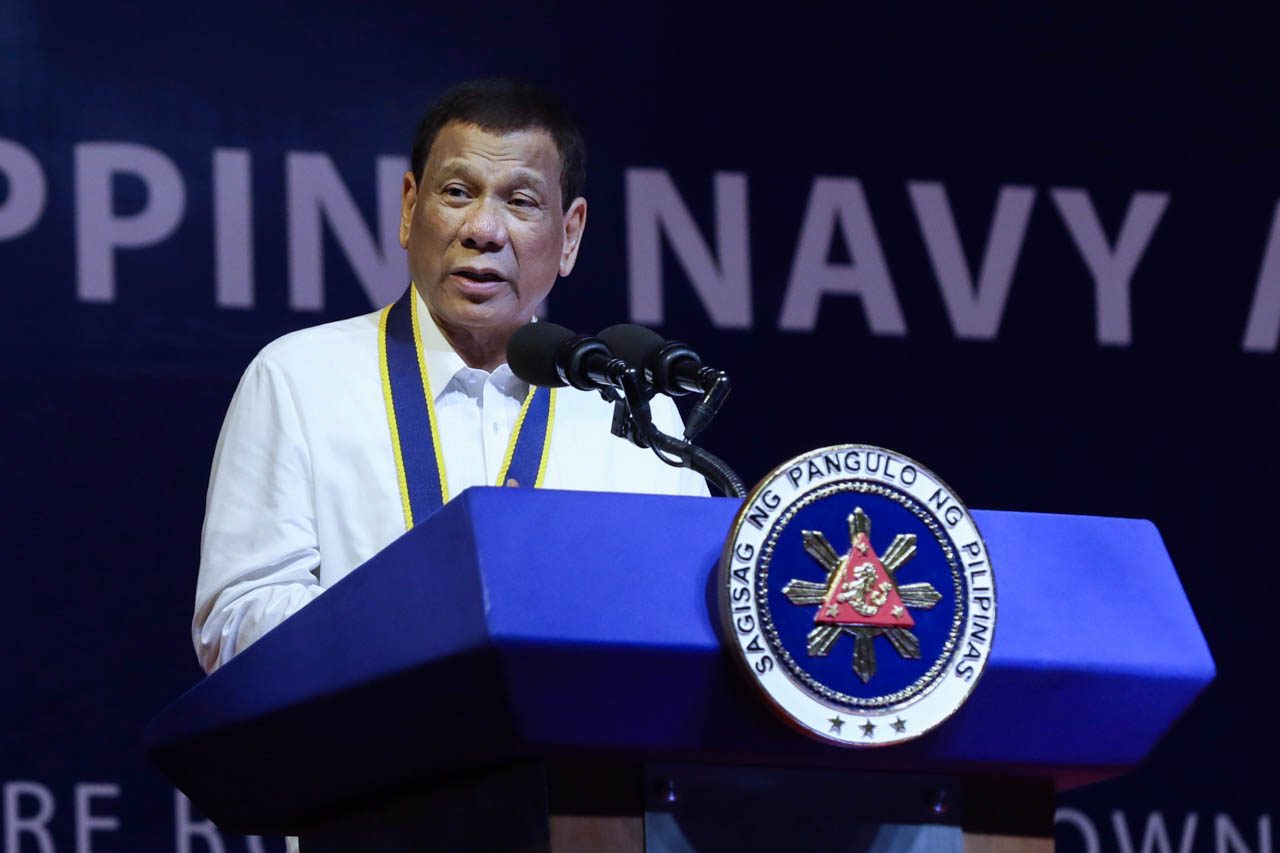 Facebook Twitter Copy URL
Copied
President Rodrigo Duterte cites an agreement reached with China supposedly allowing Filipino fishermen to fish in Panatag Shoal. But the shoal is a common fishing ground whereas fishing in the Philippines' EEZ is reserved for Filipinos only.

MANILA, Philippines – President Rodrigo Duterte said on Wednesday, June 26, that he could not “prohibit” or “drive away” Chinese fishermen from Philippine waters because of a supposed agreement between him and Chinese President Xi Jinping to allow fishing rights for both their peoples.

The President was talking about the Recto Bank boat sinking incident at the time he mentioned this in his speech at the anniversary of the Presidential Security Group (PSG) on Wednesday.

Recto Bank is part of the Philippines’ Exclusive Economic Zone (EEZ). According to the Constitution, only Filipinos may fish inside the country’s EEZ.

(They asked, ‘Will you allow the Chinese to fish?’ I said, ‘Of course.’ We talked about that before, that’s why we are talking. And that was why we were allowed to fish again. It was a mutual agreement. Okay, let’s be generous with each other. You fish there, I fish here. But China said it has – we have others – so we took this for ourselves.)

“We cannot drive them away because they have insisted it’s theirs,” he also said.

These were 3 quotes in the Wednesday speech where Duterte maintained that the Philippines cannot stop China from fishing in its own waters.

But it appears the President is confused, as we elaborate later in this story.

Panelo’s ‘clarification.’ Hours after Duterte made these remarks, Presidential Spokesman Salvador Panelo clarified that the Chief Executive never meant to say he would let Chinese fish within the Philippines’ EEZ.

“I have evaluated that it appears that what the President meant was China would not allow their nationals from fishing in our EEZ since they treat us as their friends, knowing that permitting their fishermen to fish in our EEZ would only result in an unwanted hostility leading to an armed confrontation,” Panelo said on Thursday, June 27.

Panelo also earlier “evaluated” Duterte’s very brief response to a question in an ambush interview on Monday, June 24, which had been interpreted by some media outfits as meaning he would allow Chinese to fish in Philippine waters.

In that June 24 interview, a journalist asked the President if he would heed the request of Filipino fishermen to keep China from fishing in the Philippines’ EEZ, to which Duterte responded: “I don’t think that China would do that. Why? Because we’re friends. And they are of the same view that that should not result in any bloody confrontation.”

Panelo’s interpretation was supposedly confirmed by Duterte himself.

“In order to be certain of my evaluation of the interview of the President, I asked him about it earlier this evening. He confirmed that indeed was what he meant,” the Palace spokesman said.

Panelo even said Duterte’s Wednesday speech was an elaboration of this stance as the Chief Executive supposedly spoke of a “modus vivendi” where China, which “claims ownership of Reed Bank, by virtue of historical right” would “allow our fishermen to catch fish there, a place declared to be within our EEZ.”

What modus vivendi on Recto Bank? But was Duterte indeed speaking of an agreement with Xi about Recto Bank?

This is belied by the fact that Duterte and Xi have yet to meet in person after the Recto Bank incident on June 9. Xi was not at the Association of Southeast Asian Nations (ASEAN) Summit in Thailand.

Duterte spoke of an agreement reached during a meeting with Xi. It was the meeting during his 2016 state visit to Beijing where he got China to allow Filipino fishermen to fish in Panatag (Scarborough) Shoal.

This is evident from Duterte’s words.

First indication that he was talking of an agreement that involved Panatag was his mention of the tense 2012 standoff in which China wrested de facto control over the shoal from the Philippines. After this incident, the Chinese Navy prevented Filipino fishermen from fishing in the area.

“In the time of Aquino – because the truth is, during the time of Albert (Del Rosario) there was a stalemate. You know this in the Navy. You faced off then,” he said in Filipino.

“When they got there, he said, ‘Okay, let’s leave.’ China did not leave. Then in between those years, our fishermen could not fish there,” continued Duterte.

It was after this recollection of events about Panatag that Duterte mentioned the meeting where China agreed to let Filipino fishermen fish in Panatag.

“Now, when I went there, he (Xi) said – I brought all my problems. ‘So what about my fishermen? They’ll go hungry. Can you not just reconsider for reasons of humanitarian?'” said Duterte.

“So now, we are allowed to fish…We cannot drive them away because they have insisted it’s theirs,” said Duterte.

Or is he saying that because China allowed Filipinos to fish in Panatag Shoal, he can’t stop Chinese fishermen from fishing in Recto Bank as a kind of quid pro quo?

The ruling declared Panatag Shoal as a common fishing ground for Chinese and Filipinos, even if the shoal is within the Philippines’ EEZ.

But Recto Bank is different.

The Hague ruling expressly declared Recto Bank as part of Philippine waters. Fishing in the area by the Chinese would be a violation of the Philippines’ exclusive rights.

Diplomats Rappler spoke with were not aware of any agreement with Xi where the Philippines explicitly allows Chinese fishermen to fish within its EEZ. This would be against the Constitution and a violation of the Philippines’ Fisheries Code. (READ: Justice Carpio: China can’t fish in PH)

On the ground, the Philippine Coast Guard (PCG) catches foreign nationals, such as Vietnamese fishermen, from poaching in Philippine waters. In March 2019, the Philippines and Vietnam had reached a verbal agreement not to arrest the other’s fishermen if they are caught in their respective fishing grounds.