Jun 27, 2019 2:44 PM PHT
Pia Ranada
Facebook Twitter Copy URL
Copied
'You cannot stop the President from doing measures or steps that, to his mind, are the correct way to obey the constitutional command to him to protect and serve the Filipino people,' says Presidential Spokesman Salvador Panelo 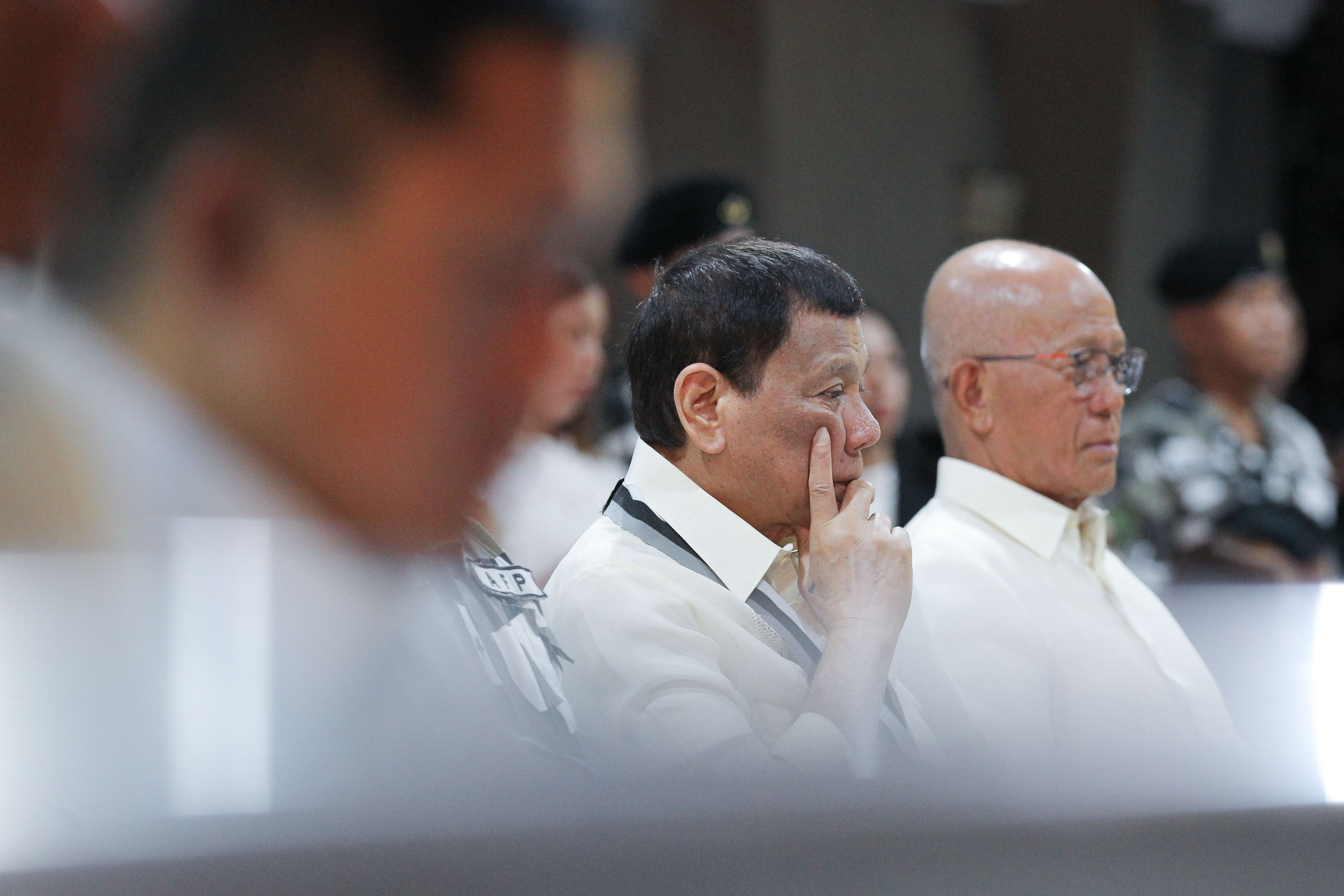 MANILA, Philippines – Presidential Spokesman Salvador Panelo said on Thursday, June 27, that President Rodrigo Duterte did not commit an impeachable offense when he declared that he can’t ban China from fishing in Philippine waters.

Asked if he thought Duterte was innocent of any impeachable offense when he made the statement,  Panelo said in a news briefing on Thursday: “Oh, definitely. What does it say – culpable violation of the Constitution, like what? Bribery? Nothing. Graft and corruption, high crimes – what did he do?”

Critics, including Supreme Court Senior Associate Justice Antonio Carpio, said Duterte’s declaration that he can’t stop Chinese from fishing within the Philippines’ Exclusive Economic Zone is a violation of the Constitution. Duterte had called Carpio “stupid” on Wednesday, June 26.

Panelo dared the President’s critics to file an impeachment complaint.

“If they think he did something impeachable, then they can file. But you cannot stop the President from doing measures or steps that, to his mind, [are] the correct way to obey the constitutional command to him to protect and serve the Filipino people,” he said.

Failure to enforce Fisheries Code? Given the President’s mandate to defend Philippine rights, Panelo was asked if the Philippines would fine or sanction the Chinese ship crew in Recto Bank (Reed Bank) for fishing or merely being in Philippine waters.

Panelo claimed there was still uncertainty as to whether it was even a Chinese fishing vessel or if it was truly fishing or merely on “innocent passage.”

“In the Reed Bank incident, we don’t know if they are fishing there or they were just passing through because they are also entitled to innocent passage. That’s precisely why we want to investigate,” said Panelo.

But the Chinese government had already admitted the ship involved was a Chinese one. An early Chinese embassy statement also said the ship was conducting “light purse seine operations,” a fishing method.

Transportation Secretary Arthur Tugade had also earlier said that Philippine agencies under his department that were tasked to investigate the Recto Bank incident – the Maritime Industry Authority and the Philippine Coast Guard – had finished their probe and had submitted their findings to the Office of the President on June 20.

Human rights lawyer Chel Diokno had said that the Fisheries Code empowers the Philippine government to fine a Chinese ship  just for being in Recto Bank.

Section 91 of the Code says “it shall be unlawful for any foreign person, corporation or entity to fish or operate any fishing vessel in Philippine waters.”

But Panelo gave assurances that if “proven” the ship was Chinese and violated the Fisheries Code, the Philippine government would hold them accountable.

“We will enforce the law, if there is a violation,” said Panelo. – Rappler.com