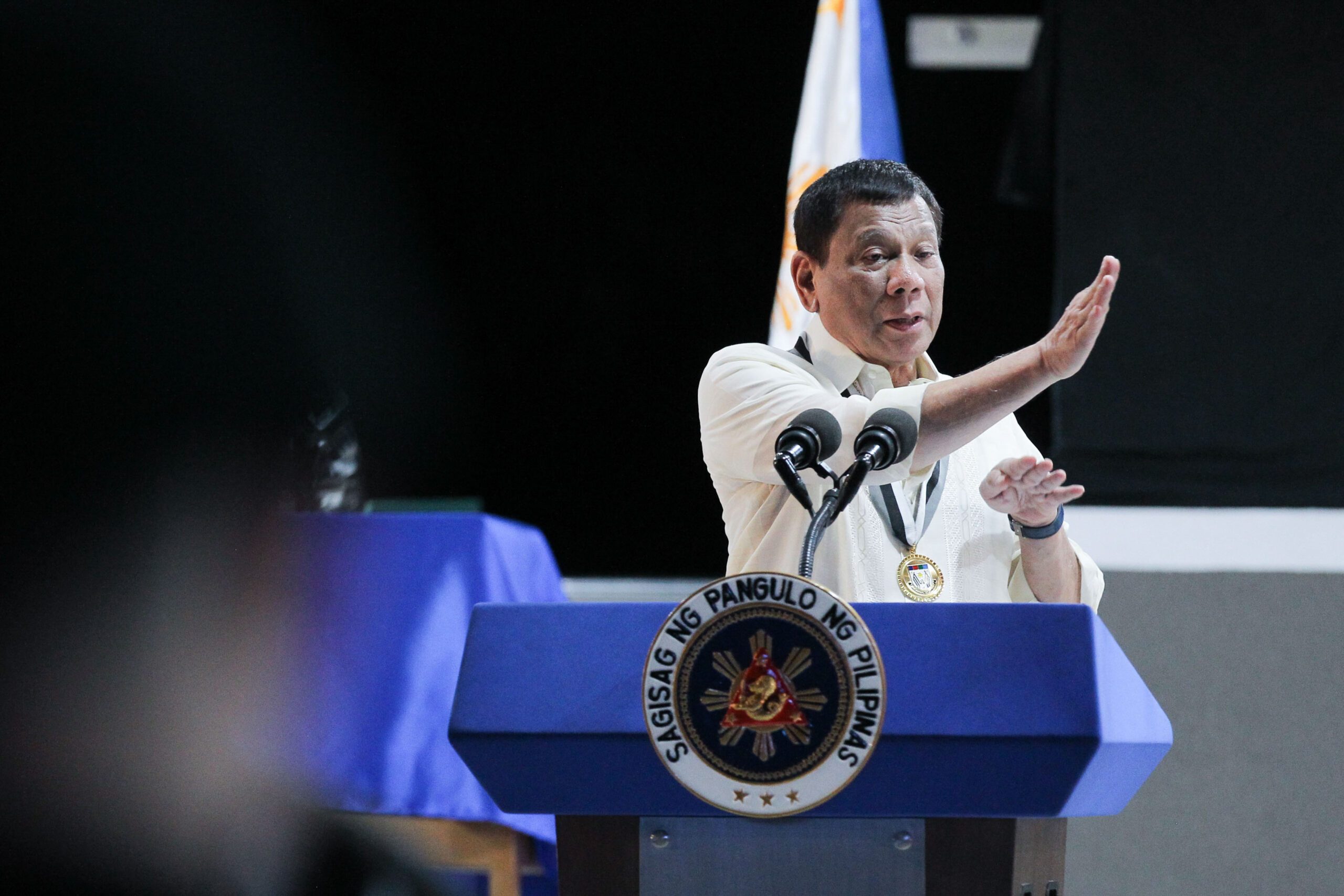 MANILA, Philippines – President Rodrigo Duterte belittled the 1987 Constitution’s provision that requires him, as Chief Executive, to ensure the resources in the country’s waters are for the exclusive use of Filipinos.

“That provision is for the thoughtless and the senseless. The protection about economic rights, about the economic zone, resources? I am protecting the country and 110 million Filipinos,” Duterte said on Thursday, June 27, in Malacañang.

The night before, he had said he cannot stop Chinese fishermen from fishing in Philippine waters.

Duterte said the provision is senseless because implementing it would earn the Philippines the ire of China, a foe it cannot hope to defeat in war.

(China is like the Filipino, you can’t embarrass it. It will go berserk and fuck you all.)

He then said China would likely treat the Philippine Constitution as tissue paper.

“I will go there and tell them, ‘Get out, this is the Constitution.’ They will tell you, ‘You ran out of toilet paper, use that,'” Duterte said.

He would do the same thing if he were China, he said.

“I would say, ‘If you don’t have anything to wipe your butt with, use that Constitution of yours.’ Because that means war and that piece of paper, the Constitution, will become meaningless with no spirit except desperation, agony, and suffering,” Duterte said.

It’s a continuation of his narrative that the Philippines’ only option with China is to stay on its good side or risk “war” if it asserts rights over the West Philippine Sea. The narrative has been challenged by many international law experts, lawmakers, and critics. (READ: 5 ways Duterte can defend Scarborough without going to war)

He told one of these experts, Supreme Court Senior Associate Justice Antonio Carpio to give him the “formula.” The other day, he had called Carpio “stupid.”

He repudiated suggestions to call on the United States, by invoking the Mutual Defense Treaty.

“America? Why call America? That will all the more bring us to the verge of war,” Duterte said.

The constitutional provision which Duterte poo-pooed orders the government to ensure the natural bounty of Philippine waters, including the Exclusive Economic Zone, will benefit only Filipinos.

This provision, Article 12 of the Constitution, says, “The State shall protect the nation’s marine wealth in its archipelagic waters, territorial sea, and exclusive economic zone, and reserve its use and enjoyment exclusively to Filipino citizens.”

Carpio has said allowing Chinese fishermen to fish in Philippine waters – which Duterte said he would do – is a violation of the Constitution.

“Culpable violation of the Constitution” is grounds for the impeachment of a president.

Duterte dared his critics to try to impeach him. They would end up in jail, he said.

“Impeachable? Kulungin ko silang lahat. Subukan n’yo. Try to take it, I mean to do it, and I will do it. Sabihin ko sa mga sundalo, ipadala ko kayo doon. Eh paano ang mga pamilya nito? Tapos maubos?” he said.

(Impeachable? I’ll imprison them all. You try. Try to take it, I mean to do it, and I will do it. I’ll tell the soldiers to bring you there. What about their families? They’ll be slaughtered?)

All presidents make an oath to protect the Philippine Constitution, the supreme law of the land. – Rappler.com