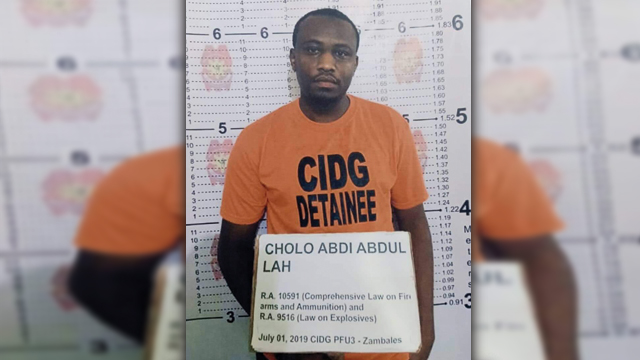 MANILA, Philippines — A Kenyan aviation student with suspected links to the Al Qaeda terror group was arrested in Iba, Zambales, on Monday, July 1, for possessing illegal firearms and explosives.

Operatives from the Philippine National Police (PNP) and the Armed Forces of the Philippines nabbed Cholo Abdi Abdullah at the Rasaca Hotel and confiscated a 9-mm pistol, ammunition, a homemade bomb (improvised explosive device or IED), a hand grenade, and components used in making bombs.

A report from the PNP Criminal Investigation and Detection Group (CIDG) linked Abdullah to the Al Shabaab terror group that operates mainly in East Africa, and is affiliated with Al Qaeda.

“He pledged allegiance to the Al Qaeda group since 2012 and matagal na po siyang hinahanap (authorities have been looking for him for a long time) and it so happened he was last located in the Philippines, that’s why the foreign counterparts coordinated with the PNP and AFP for the immediate arrest of this Kenyan national,” CIDG Director Amador Corpus said in a press conference.

“This was a priority operation because it is an urgent operation considering that he was described by foreign counterparts as very dangerous, that’s why nag-double time ‘yung mga tropa in monitoring (that’s why our troops worked double time in monitoring),” he added.

Abdullah had been studying at the All Asia Aviation Academy and researching on “different aviation threats, aircraft hijacking, and falsifying travel documents,” the report added.

Abdullah will be charged with violating Republic Act (RA) No. 10591 or the Comprehensive Firearms and Ammunition Regulation Act, and RA 9516 or the Illegal Possession of Explosives law.

Established in 1988, Al Qaeda is responsible for several bombings in East and North Africa, South Asia, and the September 11, 2001 attacks in the United States. Its affiliates, including Al Shabaab, have carried out terror attacks in different parts of the world. – with reports from Randy V. Datu/Rappler.com