Duterte pushes for charter change after naming next Speaker 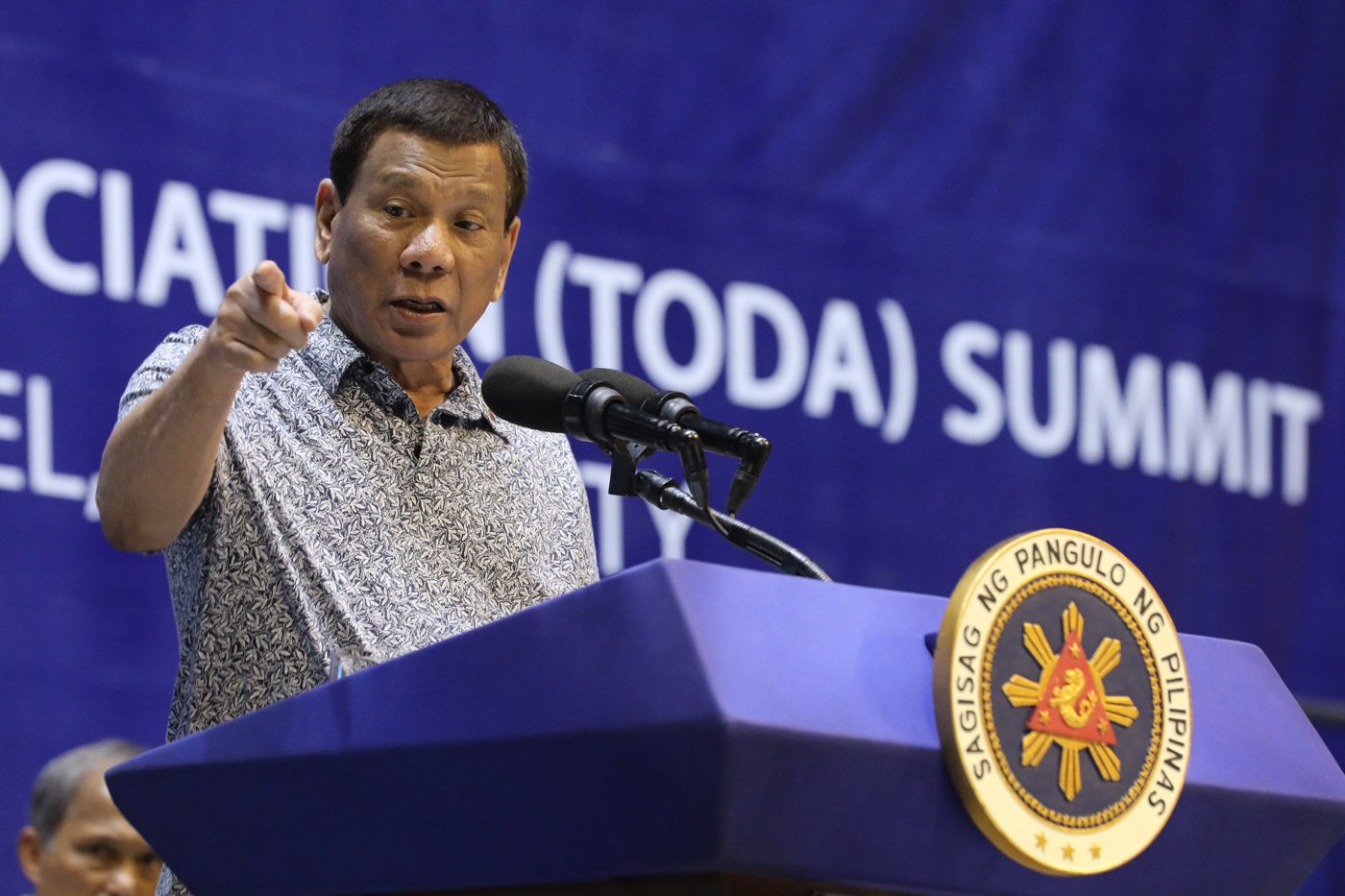 Facebook Twitter Copy URL
Copied
President Rodrigo Duterte tells the House of Representatives' next leaders that changing the Constitution is necessary, whether or not for a federal shift

MANILA, Philippines – In the same speech in which he announced the next Speaker of the House of Representatives, President Rodrigo Duterte pushed for a change in the 1987 Constitution, an effort that would require the efforts of the lower chamber.

“We have to change the Constitution, whether federal or whatnot. Sabi ko doon sa tatlo, kinausap ko (I told the 3, I talked to), [the] Speaker and that is Cayetano,” said Duterte on Monday, July 8, during a speech at the oath taking of new government appointees.

He was referring to his meeting earlier with Taguig City-Pateros Representative Alan Peter Cayetano, who he said would be the next Speaker; Marinduque Representative Lord Allan Velasco, whose speakership would follow; and Leyte 1st District Representative Martin Romualdez, who will be House Majority Floor Leader.

A shift to a federal system of government, which Duterte had promised he would champion, is now secondary to a change in the Constitution to address corruption.

Duterte claimed the military is increasingly getting angered by corruption, making charter change an urgent concern for the last half of his presidency. (READ: What you need to know about charter change)

“If you want to change the Constitution, do it now, nandiyan pa ako and I can tell the military, ‘No, no, no, you better’ – ‘Yang military mainit na. I’ve told you all the corruption sa gobyerno ang pinakamalaki, andiyan sa taas,” said Duterte.

(If you want to change the Constitution, do it now, while I’m here and I can tell the military, “No, no, no, you better” – Things are heating up in the military. I’ve told you, all the corruption in government is happening up there.)

However, Duterte did not explain why charter change is the best way to end government corruption. The current Constitution has provisions for holding government officials accountable for graft and corruption. This is supplemented by laws that impose penalties for plunder and other forms of abuse.

The President devoted large chunks of his speech to railing against corruption, even repeating that he wants to resign because of the enormity of the problem.

He claimed corruption is so bad that there are now rumblings in the military for a coup d’etat.

(If you want to push through with that coup d’etat, it’s up to you. Me, I want to go home to Davao. I said, I’m frustrated. I regret running because I can’t hack it.)

The Chief Executive encouraged House members to look for “anti-people contracts” as a way to solve corruption.

“What ails this country? I will allow the congressmen to dig and you will find that all of the contracts that are anti-people are in the hands of the stupid filthy rich,” said Duterte.

If the 18th Congress wants charter change within Duterte’s term, they have only 3 more years to do so. Duterte’s presidency ends in 2022.

For charter change to happen, Congress must convene as a Constitutional Assembly (Con-Ass) or a Constitutional Convention (Con-Con) must be organized. If the Con-Ass or Con-Con approves a new constitution, this document must be approved by a majority of Filipino voters in a national plebiscite.

Duterte had previously formed a Consultative Committee that drafted a federal constitution. The House, under Pampanga 2nd District Representative Gloria Macapagal Arroyo, had also put forward its own version.

The Senate, at the time, was not as sold on charter change. But with Duterte allies set to dominate the upper chamber when the 18th Congress opens on July 22, this could change. – Rappler.com