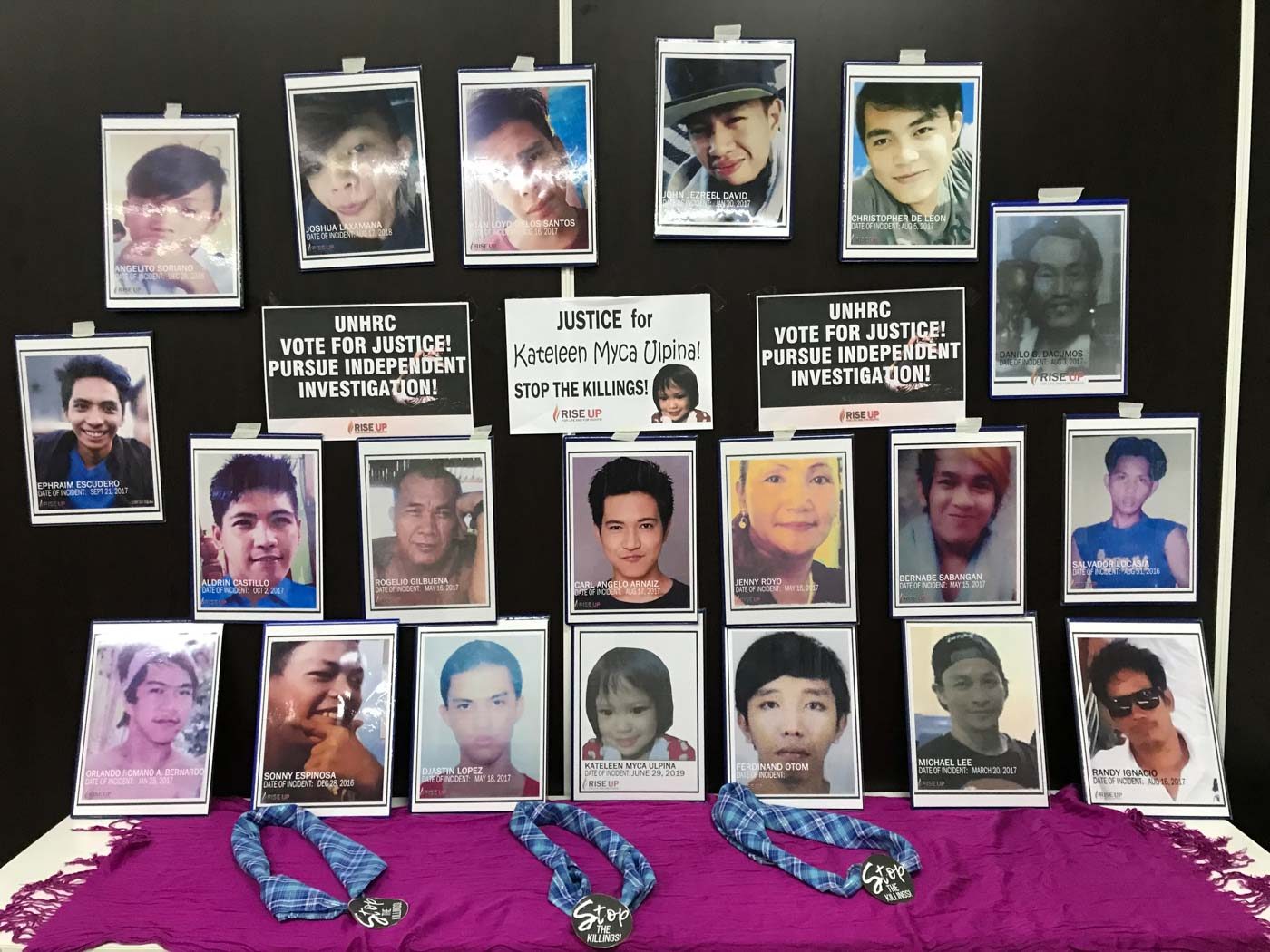 MANILA, Philippines – Philippine rights groups on Wednesday, July 10, called for the urgent adoption of the Iceland resolution before the United Nations Human Rights Council (UNHRC), seeking action against the high number of drug war killings in the Philippines.

Karapatan secretary general Cristina Palabay said that their conversations with several other countries indicated support for the resolution.

The National Union of Peoples’ Lawyers (NUPL) and Karapatan were two of the many Filipino organizations that attended the 41st Session of the UNHRC to lobby for an investigation into the Philippine situation.

“They know the Philippines to have a vibrant democracy, and to have it backslide like this causes a concern. By our conversations and feedback from various capitals, they’re strongly looking into the possibility of passing this resolution,” Palabay said.

“At the same time, we’re emphasizing that there’s no other time. This is opportune,” she added.

Iceland on July 4 filed a draft resolution that, if adopted, would request rights chief Michelle Bachelet to prepare a comprehensive report on the human rights situation and would also urge the Philippine government to cooperate by facilitating country visits and “refraining from all acts of intimidation or retaliation.”

The UNHRC will vote on the draft resolution before the 41st session ends on Friday, July 12.

Palabay condemned one Philippine diplomat who allegedly called  Iceland a “bully, colonialist, and traitor” for interfering with the Philippine justice system. She referred to former ambassador Rosario Manalo, a member of the Philippine delegation to the 41st session of the UNHRC.

National Union of People’s Lawyer (NUPL) president Edre Olalia, meanwhile, said that the government should be supportive of the proposed measure if the Duterte administration was confident that it was not doing anything wrong.

“Why prevent them from looking into the cases? [If it truly works,] how come they have to resort to extrajudicial?” he said.

“It’s not even a question of sovereignty – it’s universal human rights. It crosses borders,” Olalia added.

Foreign Secretary Teodoro Locsin Jr suggested on Twitter that those in favor of the resolution must be receiving money from drug cartels, a comment Olalia considered as “the most absurd lie from a top diplomat.”

“Whatever happens, the government will stick to its narrative that there are no extrajudicial killings),” Olalia said.

At lelast 6,000 suspected drug personalities have been killed in police operations under President Rodrigo Duterte’s war on drugs. Human rights groups peg the number at more than 20,000, to include those killed vigilante-style. (READ: The Impunity Series)

Families of victims of extrajudicial killings on Tuesday, July 9, also urged the UNHRC to hear their plea and begin an independent investigation into the violence in the country.

Reverend Irma Balaba of the National Council of Churches in the Philippines (NCCP) recognized the sacredness of life, especially in the case of a government accused of killing its own people.

“Kahit isang buhay ay napakahalaga (Each life is important),” she said. “As NCCP, we’re calling the faithfuls of the world to storm the heavens with our prayers to pressure the UNHRC to vote in favor of the resolution of Iceland.” – Rappler.com