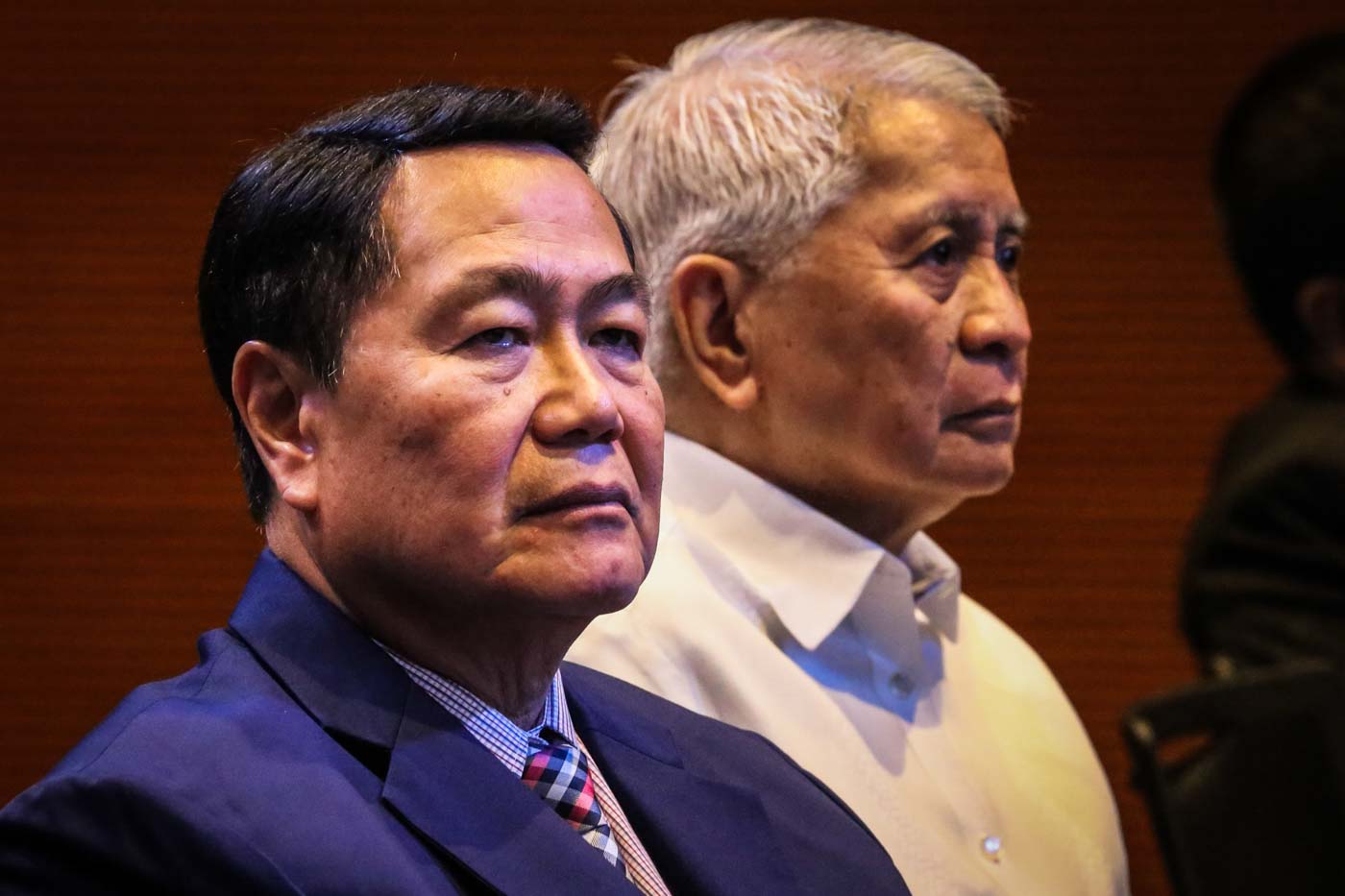 Carpio said it is the government’s duty to enforce the rule of law under the United Nations Convention on the Law of the Sea (UNCLOS), won by the Philippines in its historic case against China at the Hague 3 years ago. (READ: Philippines loses to China 3 years after Hague ruling)

“We cannot just decry the absence of an enforcement mechanism under UNCLOS. We cannot adopt a defeatist attitude and just sit idly by and let China seize what international law has declared to be our own exclusive economic zone,” Carpio said in a speech at the Ateneo Law School’s graduation rites on Sunday, July 14.

Carpio was responding to Duterte’s earlier challenge to him. Duterte had dared Carpio in an interview, “Xi Jinping said there will be trouble so answer me, Justice, give me the formula and I will do it.”

“My response is yes, Mr President, there is a formula, and not only one but many ways of enforcing the arbitral award without going to war with China using only the rule of law,” Carpio said.

Carpio offered at least 6 ways the government can enforce the arbitral award.

Entering into a convention with Vietnam, Malaysia, Indonesia, and Brunei regarding the South China Sea

Welcoming and encouraging freedom of navigation and overflight operations (FONOPs) of naval powers like the United States, United Kingdom, France, Australia, India, Japan, and Canada in the South China Sea, including the West Philippine Sea

Carpio once again refuted Duterte’s repeated claim that China might wage war on the Philippines if it enforced its rights in the West Philippine Sea. The senior SC justice said such a position was a “hollow attempt to scare our people into submission to China.”

“This position repeatedly reiterated by the present administration makes the Filipino people feel helpless and hopeless, makes our armed forces appear timid and useless, and denigrates the rule of law. This false option should be discredited once and for all,” Carpio said.

With several options available to the Philippine government, Carpio said that whenever the threat of war is raised, Filipinos should refute the idea that this is the only option. (READ: Talk to China or go to war? ‘False option,’ Carpio says)

Carpio urged the Duterte administration to undertake the solutions offered “part by part, brick by brick, until the award is fully enforced.”

He added: “We won a great victory at the Hague by resorting to the rule of law. The arbitral award is the rule of law, but the absence of an enforcement mechanism prevents the rule of law from becoming the rule of justice.” (READ: Carpio warns Duterte vs defending China in SONA 2019)

Three years after the Philippines’ victory at the Hague, Carpio hit the Duterte administration for doing “absolutely nothing” to enforce the award.

Like Carpio, the Philippines’ lead counsel against China, Paul Reichler, said the Philippines can make China comply with the Hague ruling by joining forces with other countries.

Reichler told Rappler: “How do you get a big and powerful state to comply with its obligations especially if you are a much smaller and much less powerful state? It has to be by joining forces with other states that have similar interests in encouraging China, in pressuring China, to comply with international law and to respect their sovereign rights.” – Rappler.com