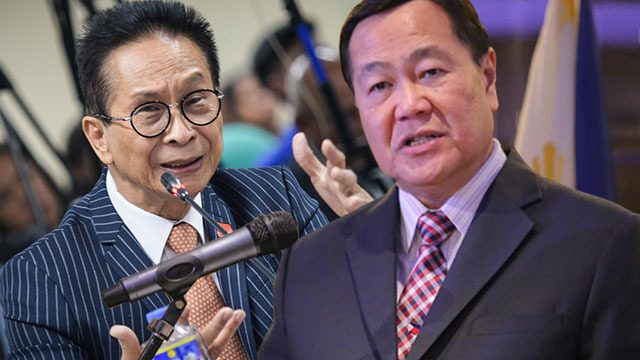 MANILA, Philippines – Despite obliging President Rodrigo Duterte’s demand for options to enforce the Hague ruling aside from war against China, Supreme Court Senior Associate Justice Antonio Carpio got the cold shoulder from Malacañang.

Presidential Spokesperson Salvador Panelo dismissed 6 suggestions made by Carpio and insisted Duterte’s decision to stay on China’s good side is the “best” course of action.

(Still, the best is negotiation. That is the No. 1 option. Let’s talk.)

The spokesman also claimed Duterte himself had studied the options Carpio presented, and supposedly found them wanting.

“For now, the President has studied all that and he chose the most intelligent, the least dangerous solution and that’s why there are diplomatic relations because all misunderstandings between countries will be resolved through dialogue,” said Panelo.

But so far, Duterte has not asserted the Hague ruling in his meetings with Chinese leadership, though he did remind Chinese President Xi Jinping of its existence once in a bilateral meeting.

Duterte has stuck to the line that asserting the Hague ruling would only make China declare war against the Philippines.

While the Philippines and China have engaged in talks on the sea dispute since May 2017, critics and maritime experts point out that these have not stopped China’s militarization in the South China Sea, buildup of artificial islands in Philippine waters, and other forms of aggression.

The presence of a Chinese fishing vessel in Recto Bank, which hit a Filipino fishing boat on June 9 and abandoned its crew to the elements, is the latest incident to heat up the dispute.

Carpio said Duterte’s projection of war as the only other option is a “hollow attempt to scare our people into submission to China.” – Rappler.com