People’s SONA 2019 to unite for sovereignty, democracy vs Duterte 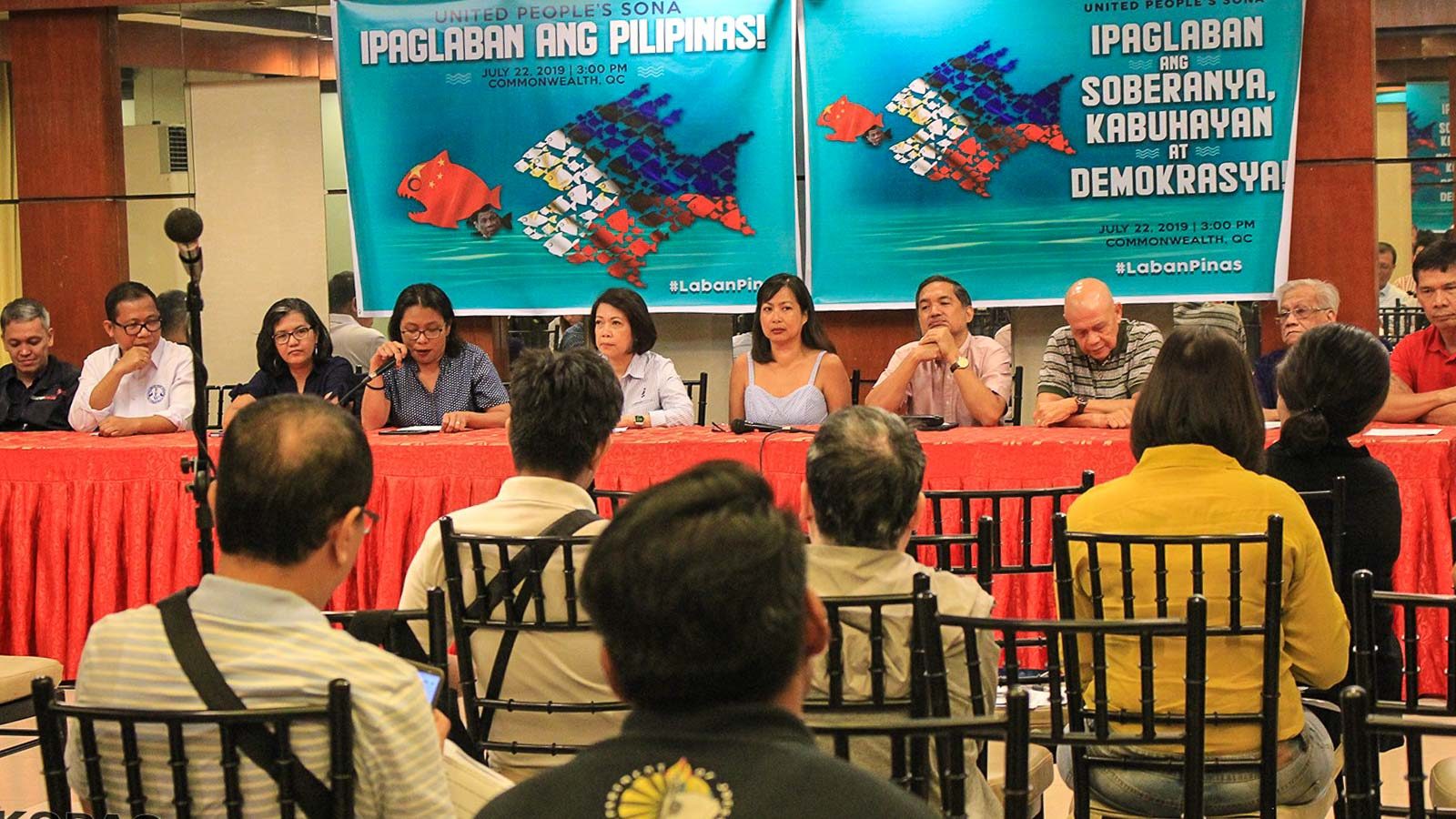 Facebook Twitter Copy URL
Copied
'We must remind the President that he is not above God, the people, nor the Constitution, and that he is no king,' says former chief justice Maria Lourdes Sereno of the planned United People's SONA on July 22

MANILA, Philippines – A coalition of opposition personalities and groups will highlight the country’s struggle for sovereignty, democracy, and livelihood through the United People’s State of the Nation Address (SONA) on Monday, July 22.

The United People’s SONA will show its strongest opposition to President Rodrigo Duterte’s stance in the West Philippine Sea, attacks against human rights, and economic policies, among other issues. It also aims to counter Duterte’s annual SONA which the Philippine chief would deliver that same day at the House of Representatives.

BAYAN secretary-general Renato Reyes Jr said at the press briefing on the event that it will be the first time for the United People’s SONA to focus on the central issue of “sovereign rights in the West Philippine Sea,” in light of Duterte’s growing relationship with China at the expense of Filipino fishermen and Philippine waters. (READ: Duterte vs fishermen: Is the Philippines lawyering for China?)

Speaking at the event, former chief justice Maria Lourdes Sereno reminded Duterte of his duty and the limits of his power.

Sereno also called on the people to unite “despite ideological differences,” for the sake of “upholding what is good and true.”

“I call on the people to unite so that we can call for a better, nobler, upright leadership; one that is not led by hatred and violence, but by principle and example,” she added.

Various opposition groups are expected to stage their own programs along Commonwealth Avenue and Elliptical road in the morning of Duterte’s SONA on July 22, before marching towards the main stage at St Peter Parish Church at around 2 pm.

Thousands of Filipinos are expected to hold United SONA programs not only in the Philippines but also abroad.

Reyes urged participants to wear blue during the people’s SONA, and bring images or signs that represent marine resources and “marine heritage that is slowly being destroyed by China.”

“Tayo po ang magsisilbing dagat ng mamamayan na raragasa sa kahabaan ng Commonwealth (We will serve as a sea of citizens that will surge along Commonwealth Avenue),” he said. – Rappler.com