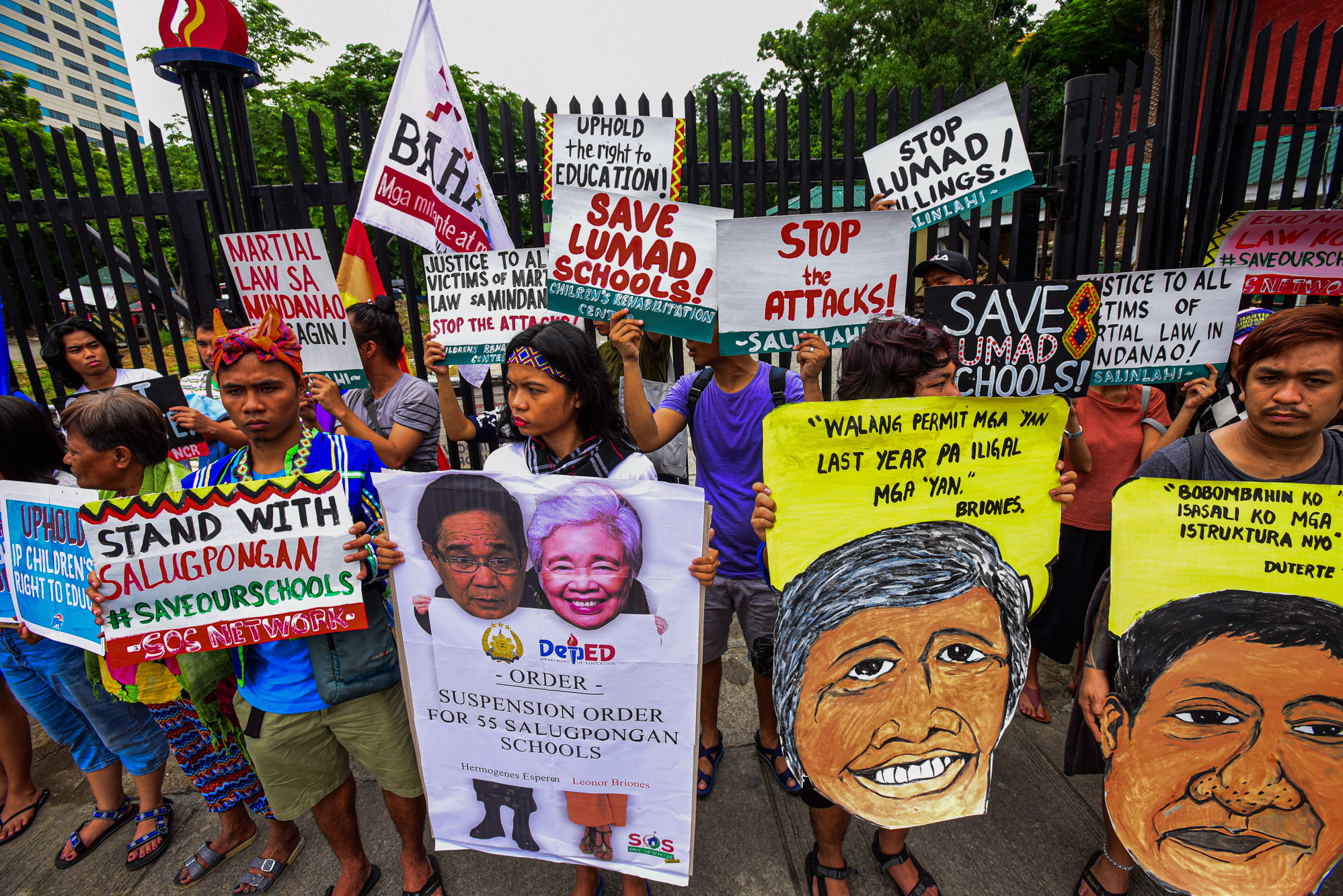 MANILA, Philippines – The Department of Education (DepEd) said on Thursday, July 18, that its regional office only ordered the suspension – not immediate closure – of 55 Lumad schools in the Davao region.

DepEd made the clarification amid protests against the temporary closure order on the schools issued by DepEd-Southern Mindanao on July 12.

The order gives Salugpongan Ta’ Tanu Igkanogon Community Learning Center, Inc. (Salugpongan), the owner and operator of the schools, the chance to show cause or to justify to the department why the schools should not be closed.

Salugpongan has until Monday, July 22, to answer DepEd.

The decision to order the temporary closure of the Lumad schools was based on a report of National Security Adviser Secretary Hermogenes Esperon Jr, vice chair of the Task Force to End Local Communist Armed Conflict.

The report alleged that the schools deviated from the basic curriculum and claimed that school officials required students to join anti-government rallies and taught them to rebel against the government. (INFOGRAPHIC: Who are the Lumad?)

The order said that Esperon’s report came with an affidavit executed by a certain Melvin Loyod, who claimed to be a former teacher of a Salugpongan-owned school in Davao del Norte.

In his affidavit, Loyod supposedly said that learning modules used by the school taught students New People’s Army songs and plays depicting abuses – from torture to rape – by the military.

The DepEd also said on Thursday that aside from Esperon’s report, another basis for the order was Salugpongan’s noncompliance with DepEd standards.

The order stated that the DepEd had “pertinent documents to the effect that Salugpongan falls short of the requirements and conditions in operating a private school.”

Briones said that some of the schools had no enrolment at all, and that some schools were just 100 to 150 meters away from the nearest public school.

“Why are they [Salugpongan] building schools in the first place? That is for them to explain,” said Briones.

Meggie Nolasco, executive director of Salugpongan, told Rappler in a phone interview that they were preparing their response to DepEd but found this challenging as they had not been given a copy of Esperon’s report.

“How do they expect us to answer it point by point [when we don’t even know] the allegations against us?” Nolasco said.

Legislators from the progressive Makabayan bloc on Monday, July 15, called for a congressional investigation into the temporary shutdown of the schools, saying the order violated the right to due process of Salugpongan.

They also slammed DepEd for releasing a copy of the order to the media before informing Salugpongan first.

Likewise disgruntled was Save Our Schools network, whose members staged a protest outside DepEd’s offices in Pasig on Wednesday, July 16, condemning the closure order.

“It is appalling that the Department of Education, an institution that is supposed to protect and uphold the children’s right to education, has reduced itself as a stamp-pad for the military who have targeted the closure of Lumad schools in Mindanao,” the group said in a statement.

The Commission on Human Rights (CHR) also weighed in, saying: “While we recognize the need to address security issues, the allegation that the said Lumad schools are training ground for ‘rebels’ still require substantial pieces of evidence and due process.”

“We reiterate our reminder against using blanket labels, which can endanger the safety of the communities and make them vulnerable to attacks and harassment,” CHR added. – Rappler.com