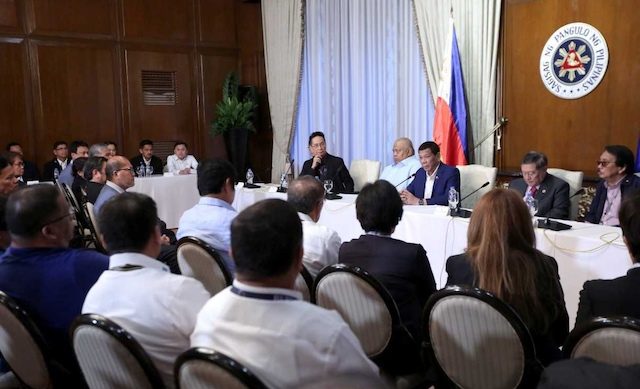 MANILA, Philippines – President Rodrigo Duterte on Thursday night, July 18, told a group of Bureau of Customs (BOC) officials and employees accused of corruption that they should resign if they want to escape administrative charges.

Presidential Spokesperson Salvador Panelo relayed to the media around Thursday midnight details of Duterte’s meeting with the group in Malacañang, held a week after the President announced that he would dismiss 64 BOC personnel due to alleged corruption.

The Presidential spokesman said Duterte told the group that “administrative charges over allegations of corrupt practices in office will be filed against them before the Office of the Ombudsman, unless they opt to resign, and the prosecutors will ask for their immediate suspension.”

“The President has been forthright in telling these Customs officials and employees that corruption has no place under his watch. He told them that consistent with due process, they will be given their day in court,” Panelo said in a statement.

Duterte had made the same statement in his speech at the Government-Owned and Controlled Corporations (GOCC) Day ceremony in Malacañang on July 11, but at the time, he said the meeting would be held on July 15.

On Thursday, Panelo said the President assured the BOC personnel “that he would not begrudge them if they would avail of legal remedies to question their removal from office.”

“Pending the filing of cases, they shall be in floating status without authority to act on official matters. Let this serve as a reminder to all those officials or employees in the government that they cannot escape liability or accountability for their acts of corruption under the Duterte administration,” Panelo said.

Panelo did not give details on how many officials and employees were invited to the meeting. A July 17 BOC travel order addressed to the concerned personnel listed 52 people who were invited to the Malacañang meeting – less than the 64 announced by Duterte last week.

While Duterte had been consistent in saying that he would not tolerate even a “whiff of corruption,” he had been known to reappoint previously sacked or resigned officials, some of them, to the BOC.  (LIST: No to corruption? Duterte’s controversial reappointees)

In May, he not only appointed but promoted sacked district collector Vener Baquiran – under investigation over the 2018 multibillion-peso shabu shipment controversy – as BOC deputy commissioner. He was not among those invited to the Thursday meeting. – Rappler.com