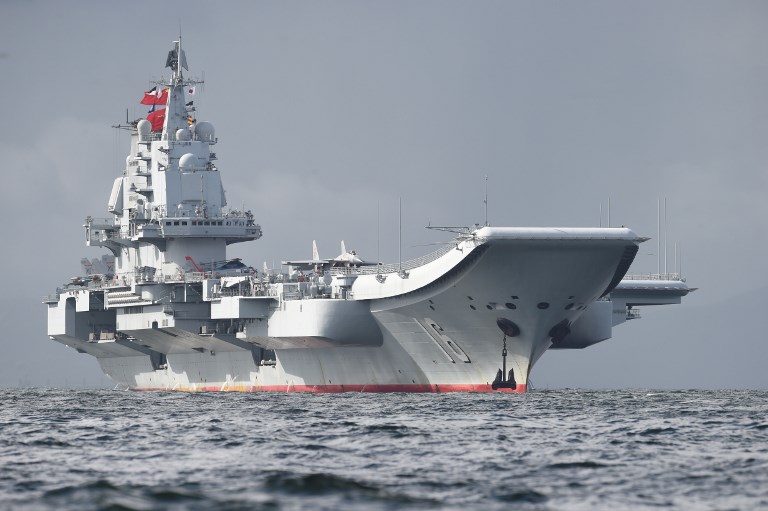 “I got information and I verified it that the Chinese aircraft carrier, their sole operating aircraft carrier, has passed through the Sibutu Passage, which is within our archipelagic waters, within our territorial waters,” Carpio told reporters at a forum at the University of the Philippines Diliman on Friday, July 19.

Carpio was referring to the CV-16 Liaoning, China’s first and so far only commissioned aircraft carrier. Varying reports said China has up to 3 new aircraft carriers under construction or testing.

Sibutu Passage is a narrow sea lane between the main island of Tawi-Tawi and Sibutu island, a municipality of Tawi-Tawi province. It is considered an international strait where vessels from any country have a “right of innocent passage.”

Carpio acknowledged that the Liaoning can sail through the Sibutu Passage under the principle of innocent passage.

“But you know, there’s an irony here because the Chinese are saying, in their territorial sea, right of innocent passage can be exercised only with the prior consent or prior notification to the coastal state,” Carpio said, referring to China’s practice of driving away vessels and planes passing through what it claims to be its territorial waters in the West Philippine Sea.

The Associated Press reported in July 2018 that Philippine military aircraft patrolling the West Philippine Sea in the latter part of 2017 received at least 46 Chinese radio warnings to “leave immediately…or you will pay the possible consequences.”

In August 2018, CNN reported that the crew onboard a US Navy P-8A Poseidon reconnaissance plane flying above the West Philippine Sea received 6 warnings from the Chinese military to leave and keep out of its “territory.”

“For other states, [the Chinese] require notification or even approval but when they do it, they don’t notify or secure approval from the coastal state,” said Carpio.

“So it’s a double standard.”

No need to ask

Rappler sought comment from Defense Secretary Delfin Lorenzana to confirm the Liaoning’s passage and if so, whether it notified Philippine authorities.

“No, we were not informed by our troops about the passage of the Liaoning in the Sibutu strait. The Sibutu strait is a strip of water between Tawi-Tawi and Sibutu. It is an international shipping lane. About 150 ships pass there every week. There is no need to ask permission if it is innocent passage,” Lorenzana said.

“While it is a territorial water of the Republic of the Philippines, we cannot impose ‘no passage’ under the right of way of international shipping,” the defense chief added.

For Carpio, the country’s most senior High Court magistrate, it is a matter of justice.

“The Sibutu Passage has been acknowledged as an international waterway so they have a right to pass there. Under our practice, they can do that without notifying us. But their own position is you should notify the coastal state. So they have a double standard,” Carpio said. – Rappler.com