Jul 27, 2019 12:05 AM PHT
Rappler.com
Facebook Twitter Copy URL
Copied
(UPDATED) 'I said all gaming activities, gambling, that got their franchise from government through PCSO are, as of today, suspended or terminated because of massive corruption,' the President says in a televised message 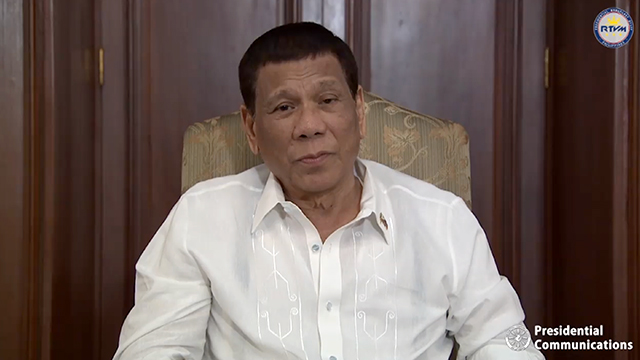 MANILA, Philippines (UPDATED) – President Rodrigo Duterte has ordered the closure of all gaming schemes operated, licensed, and franchised by the Philippine Charity Sweepstakes Office (PCSO) due to “massive corruption.”

“Pending investigation, lahat ho ng laro ng (all games such as) lotto, STL (small town lottery), Peryahan ng Bayan, or whatever nature…. I said all gaming activities, gambling, that got their franchise from government through PCSO are, as of today, suspended or terminated because of massive corruption,” Duterte said in a televised message late Friday night, July 26.

The President said that beginning Saturday, July 27, “all transactions and gaming, wager of bets, becomes illegal.”

He said the order is grounded on “the preservation of the resources of the nation.”

“I have to do it. I will not honor transactions that are clearly on the side of, you know, scheming people, the Republic of the Philippines, of the money due it. Puro dayaan lahat (It’s all cheating). At ‘yung mga kontrata ay parang (And the contracts seem to be) crafted in favor of corruption and to favor other corporations and people. I will not allow it,” the President explained.

He said he will not honor any order from any court that will stop the government’s “desire to go into a massive investigation for the massive corruption that is existing in the PCSO.”

Duterte has also ordered the police and the military to arrest people “engaged in gambling activities in connection with the franchises, licenses, concessions granted by the PCSO.”

“Talagang hiningi ninyo. Sinabi ko na nga walang corruption. Hinihingi talaga ninyo, ibigay ko sa inyo. (You really asked for it. I already said no corruption. You really asked for it, so I’ll give it to you.) You’ve offered something to tie the people, allowing gambling and maybe it can help in the economic activity because money goes around. But if you fuck government, that’s something else,” he added.

Duterte’s order comes months after the firing of PCSO general manager Alexander Balutan in March over “serious allegations of corruption.”

In a statement, Presidential Spokesperson Salvador Panelo said Duterte will reveal the people allegedly involved in corruption at the PCSO.

The  Chief Executive will identify the culprits in due time and the full force of the law will come crushing  down on them,” Panelo said.

He said the President’s announcement should serve as a warning to others in government.

Panelo explained that Duterte’s order was prompted by reports of a  “grand conspiracy among the major players and enforcers of these government-sanctioned gaming activities and enterprises to cheat the government of its rightful shares, depriving therefore the masses of our people of receiving basic services needed by them.”

“The President has ordered all licences, concessionaires, and franchises issued by the PCSO are all recalled, cancelled  and withdrawn, effective immediately. All law enforcers are directed to implement the President’s directives with dispatch and without exception,” he added. – Rappler.com