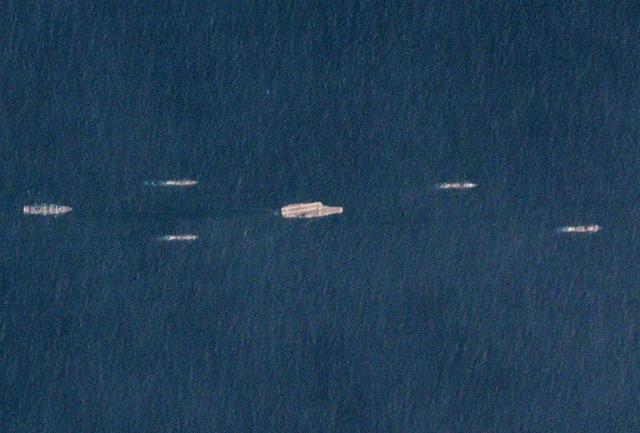 MANILA, Philippines – The Armed Forces of the Philippines (AFP) said there was “duplicity” when Chinese warships traversed Philippine waters recently without prior notice to the government, and with their automatic identification systems (AIS) turned off.

(We didn’t observe anything because our radars were unable to detect them because, as we have said, there was duplicity done because they turned off their identification systems that are used in identifying vessels.)

At least 4 Chinese warships passed through the Sibitu Strait in the waters of Tawi-Tawi since February this year, undetected by Philippine radars, Defense Secretary Delfin Lorenzana revealed last week.

China’s first operational aircraft carrier, the Liaoning, and its flotilla of smaller vessels could have also passed Philippine waters, according to various reports.

It appeared that Philippine authorities were alerted only after the vessels’ passage, and through unofficial information made public by Supreme Court Senior Associate Justice Antonio Carpio on July 19.

On Monday, July 29, Lorenzana told CNN Philippines the Chinese warships must have turned their AIS off, since they were able to pass undetected by military radars near the Sibutu Strait.

Although the waterway is considered an international sea lane where vessels from any country have the right of innocent passage, international maritime law requires warships to notify a country’s government and secure “diplomatic clearance” before entering its territorial waters.

“In this case, obviously there was no diplomatic clearance. The fact that they went undetected by radar – because the suspicion was they switched off their identification system – then by all intents and purposes, this can be classified as a deception or a violation of the rule of law,” Arevalo said, adding that the incidents do not qualify as “innocent passage.”

The military spokesman’s statement is markedly stronger than previous statements made by security officials on the passage of China’s naval ships.

Although Lorenzana recently called out China’s “bullying” of Filipinos in the West Philippine Sea and questioned the warship’s clandestine sail-by, he declined to comment when asked whether he saw bad faith in the incident.

Arevalo said the AFP was investigating the matter to see if there had been a lapse in the troops’ monitoring of the busy strait, or if it comes down to a lack of technical capability.

In case of vessels with their AIS turned off, officers on monitoring duty have nothing much else to rely on but the naked eye.

As the military goes through a staggered process of modernization, Arevalo said, “for now, siguro po mauunawaan natin na mayroon pa tayong mga kailangang gawin; may mga blind spots pa tayo na tinatawag (perhaps we would understand that we still have things to do; we still have what we may call blind spots).” – Rappler.com