Aug 15, 2019 10:37 AM PHT
Rappler.com
Facebook Twitter Copy URL
Copied
For Gretchen Custodio Diez, the fight for equality is far from over. Watch the interview live on Rappler. 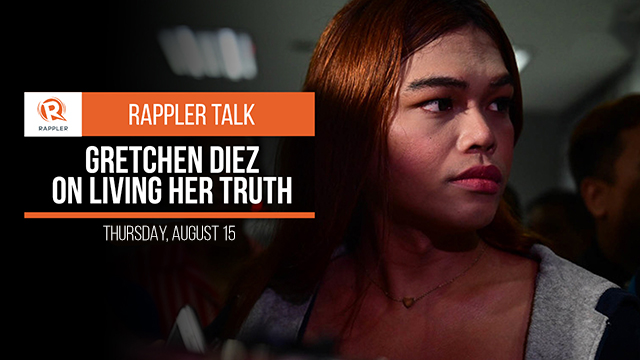 Bookmark to watch the interview with Diez at 10:30 AM

MANILA, Philippines – She has become the newest uniting figure for the Philippine LGBTQ+ (lesbian, gay, bisexual, transgender, and queer) after a harrowing experience.

Transgender woman Gretchen Custodio Diez was blocked by a janitress from using the women’s bathroom in a Cubao, Quezon City mall. She tried to document the discrimination, which she said “was wrong.”

This angered the mall’s personnel, which had her arrested. While detained inside the mall and waiting for the police called by mall personnel, Diez went live on Facebook to document the harassment. (READ: Trans woman Gretchen Diez: I didn’t think I’d be treated like a criminal)

Her video triggered public outcry, with equality-advocating lawmakers headlining the condemnation. Hours later, she was freed after the janitress decided to drop charges and apologize for her mistreatment.

It was a victory, but for Gretchen Custodio Diez, the fight for equality is far from over.

Rappler’s Rambo Talabong sits down with Diez at the Rappler headquarters on Thursday, August 15. Watch the interview live. – Rappler.com