Rappler Talk: 8chan founder Fredrick Brennan on what has become of the internet 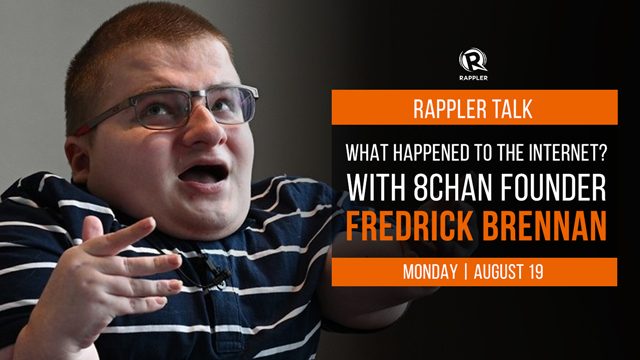 Facebook Twitter Copy URL
Copied
From a website envisioned as a platform for free speech, 8chan has become host to hate speech related to multiple mass shootings in the United States. Watch its founder, Frederick Brennan, live on Rappler.

MANILA, Philippines – What happened to the internet? From being a hope for meaningful connection, it has become the haven of fake news and hate speech.

One of the prime witnesses in this shift is Fredrick Brennan, the founder of the messageboard website 8chan.

Before severing ties with it in 2016, Brennan envisioned the website to be a platform for free speech, but it has since hosted hate speech related to multiple mass shootings in the United States.

Rappler’s Rambo Talabong talks to Brennan on what went wrong with the site and the internet, and what he thinks should be done reclaim safe online spaces.

Watch the interview live on Rappler on Monday, August 19. – Rappler.com