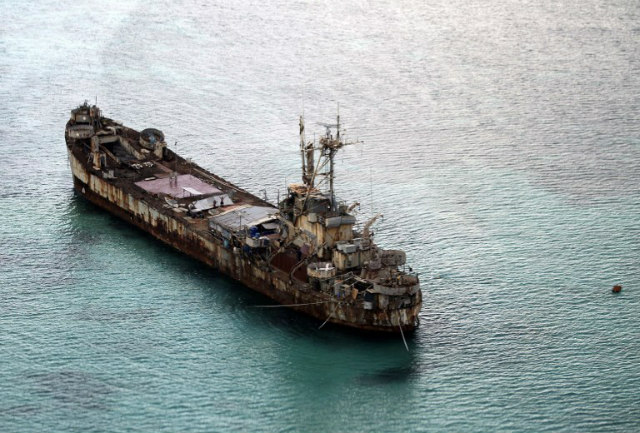 MANILA, Philippines – A China Coast Guard ship as well as 27 Chinese and Vietnamese fishing vessels have been spotted in the Kalayaan Island Group (KIG) in the West Philippine Sea, said the Armed Forces of the Philippines (AFP) Western Command (Wescom) based in Palawan.

The AFP Wescom has been monitoring the Chinese coast guard vessel since August 1, lingering near Ayungin Shoal, where the Philippine Navy ship BRP Sierra Madre is aground as a permanent outpost.

(It just goes around the area there at KIG. Of course, we are always vigilant and we also monitor this, we keep an eye on what they are doing. They’re just there, going around, then stopping, later on refurbishing.)

The 27 Chinese and Vietnamese fishing vessels were seen around Panata Island, one of the smallest natural land features in the KIG, 7 nautical miles from the Philippine-occupied Loaita Island.

Although these vessels’ presence are a cause for concern, Penetrante said it’s nothing new in the KIG. Foreign vessels regularly ply the resource-rich waters within the Philippines’ exclusive economic zone loosely guarded by Philippine patrols.

Besides, the vessels were not battleships, Penetrante said, unlike the ones recently spotted in Sibutu Strait in Tawi-Tawi and Balabac Strait in Palawan.

Security officials have confirmed 13 instances of unauthorized Chinese warship passages in Philippine territorial waters from February to August this year.

Defense Secretary Delfin Lorenzana said on Tuesday that he has yet to receive a report from the AFP Wescom about the recent vessel sightings, and declined to comment on them.

However, he welcomed President Rodrigo Duterte’s statement that the government would require all foreign vessels to secure permission before entering Philippine territorial waters, and that the military should enforce the law through “friendly or unfriendly” means.

“I am still trying to figure out what unfriendly manner we can do but that is a very good development because now, we have some authority to enforce our laws within our territorial waters,” Lorenzana told reporters. – Rappler.com