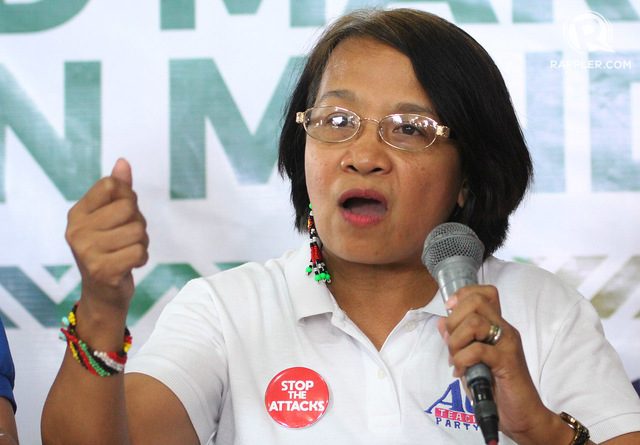 Progressive lawmakers accused the state-run Philippine News Agency (PNA) of publishing articles that “vilify” groups they belonged to, and label them as active members of the Communist Party of the Philippines-New People’s Army (CPP-NPA).

A big chunk of the Presidential Communications Operations Office’s (PCOO’s) 2020 budget briefing on Friday, September 6, was spent discussing this issue.

(How much is the PNA budget because if this is the kind of – is this journalism? – fake news that you publish, it’s best to devote that budget to basic services especially since there was a budget cut for basic services.)

Brosas cited as an example of biased PNA content a photo on its website showing a supposed “protest” of Isabela residents against her “fact-finding mission” on alleged military abuses in the province.

The PNA captioned the photo with the words “No to communist deception.” The caption claimed her fact-finding mission was “unsuccessful” and that the CPP-NPA and its front organizations are “in a panic mode.”

Brosas said the caption was untrue and placed her life in danger by making it seem like she was an active member of the CPP-NPA.

“This is very dangerous for me. Maybe anytime soon, someone who is far-right and militarist will say, ‘You are the enemy of the state therefore I will kill you,'” she said during the hearing.

President Rodrigo Duterte has asked courts to declare the CPP-NPA as a terrorist organization. On the day of the hearing, a Manila court issued an arrest warrant against CPP founder Joma Sison.

(They only show one side. It’s supposed to be a PNA that should be balanced. We only see the side that disparages progressive organizations. It’s unfair.)

She criticized PNA’s coverage of the filing of kidnapping and human trafficking charges against her and former Bayan Muna representative Satur Ocampo after they transported 14 children from Talaingod town in Davao del Norte.

Like Brosas, she said the PNA made her appear like an active CPP member and never bothered to get her side.

“Is it the policy of the PNA and PCOO to make leftists like us illegal?” Castro asked in Filipino.

“We are just narrating the quotes, the statements of our sources,” she said.

Then Agtay mentioned that the PCOO is part of the National Task Force to End Local Communist Armed Conflict, created by Duterte to stop communities from helping NPA rebels.

“Being a member of the cluster of the NTF, we are part of the Stratcom, our articles don’t contain any opinions, these are all quotes from various sources of government,” said Agtay.

For Castro, this only proved the PNA had motivations to angle their articles against progressive groups.

“So it’s really the policy of the PCOO, PNA to redtag an organization. So this is really weaponizing the media, using government funds to vilify people like us,” she said.

PCOO Secretary Martin Andanar tried to assuage Castro’s and Brosas’ concerns, saying, “It is not the policy of the PCOO to redtag.”

He instructed all government media “to be as objective as possible” and to “report both sides” of a controversy.