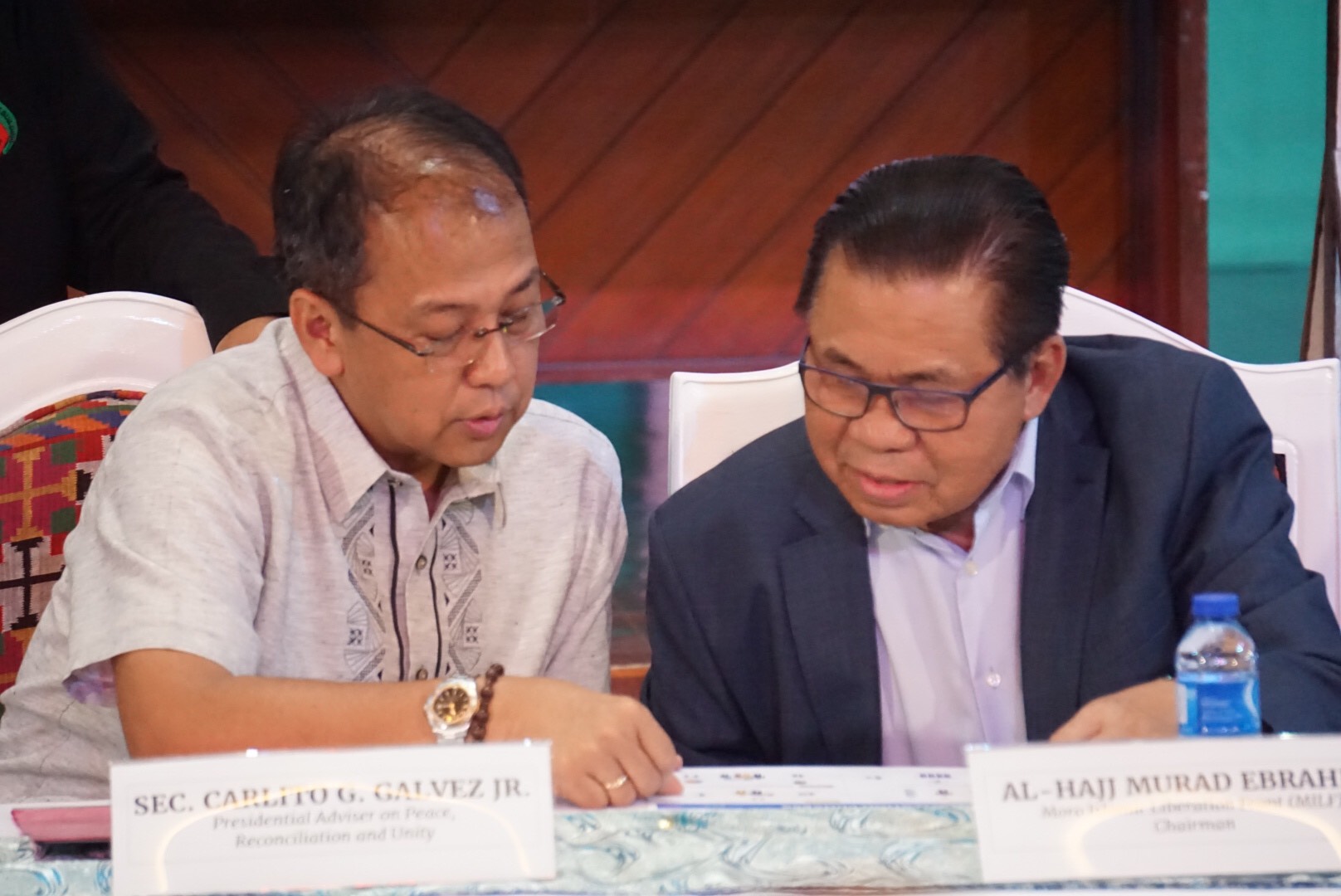 “We’re trying to maximize so that others would be part of the event tomorrow. We are seeing that there are more than 1,000. The JNC (Joint Normalization Committee) had a discussion on this…. Since the President is coming, let’s maximize to include weapons in  nearby areas. We will be increasing the 920 to more than 1,000,” Ebrahim said in a mix of Filipino and English in a media forum on Friday.

“I believe the firearms they declared is very conservative because I saw that almost all the combatants had firearms,” said Galvez, who served as Philippine military chief before he took the helm of the Office of the Presidential Adviser on the Peace Process (OPAPP).

“There is a struggle. Alam naming nahihirapan ang mga combatants dahil nandiyan pa ang mga BIFF (Bangsamoro Islamic Freedom Fighters) at private armed groups (We know it is hard for them [to give up their guns] especially because the BIFF remains a threat and there are other private armed groups),” Galvez said.

“Why do people want firearms? Why are they purchasing firearms? Sometimes our combatants are saying I can separate from my wife but not from my weapon. It’s very valuable to them. Why is that? Because of survival. They feel that they cannot survive without their firearms,” Murad said. 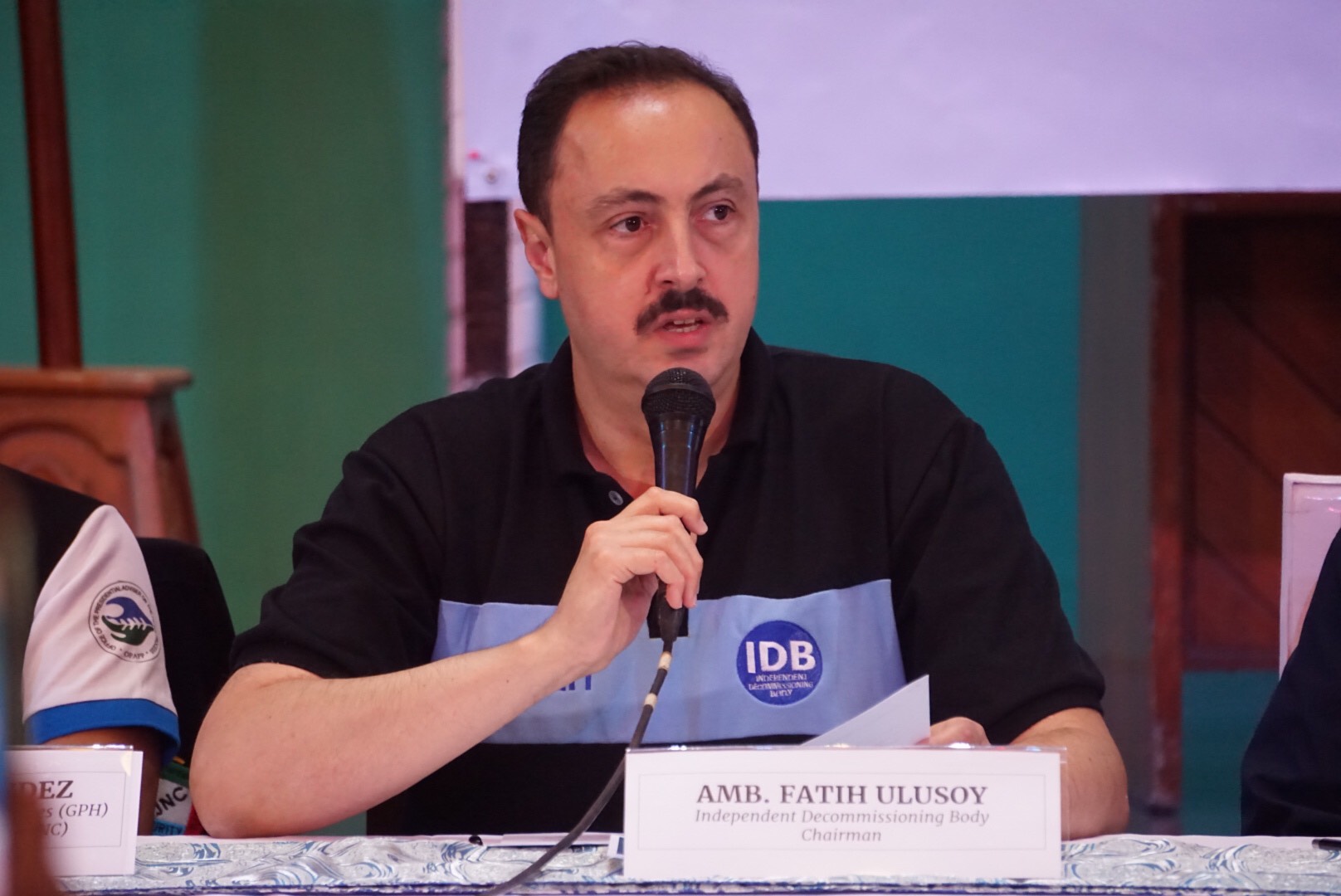 As both parties sort out the issue, Turkish Ambassador Fatih Ulusoy, IDB chairman,  hailed the commitment of both parties to work together. “This decommissioning process is a firm demonstration of the parties’ sincerity and commitment to the peace process,” Ulusoy said during the forum.

“If there is peace, development, and justice on the ground, that will ensure that people’s psyche will change. If the situation is so unpeaceful then that would also condition the mindset of people to arming themselves,” said Iqbal.

Iqbal said changing people’s mindset might take a while. The decommissioning process is expected to be completed in next 3 years. In the first phase, at least 30% of the fighters and weapons should be decommissioned by April 2020.

Galvez said he was drawing from his experience as a brigade commander cooperating with the local government in Basilan. “If the government will ensure that the children will have scholarships, the fighters will give up all their guns. I believe this is true if they feel the government is really helping them and if there is no more necessity for the firearms to be kept. They have sold most of their firearms to buy farm implements,” he said.

Galvez said the only way to ensure enduring peace in Mindanao is to get rid of loose firearms.

“We believe we can only have enduring peace if we don’t have the tools including the ammunitions and including weapons…used towards perpetrating violence. That is our hope,” Galvez added.

He laid out a government plan to aggressively enforce the firearms control law and even maximize martial law to enforce this. He said the Western Mindanao Command and the JPSTs will also take care of addressing rido or clan wars, disbanding private armed groups, and dealing with other armed groups including ISIS-linked organizations.

“While we are decommissioning, we will implement firearms control. We will also create a national task force to disband the private armed group. This is a simultaneous removing of the tools of violence in Mindanao,” said Galvez.

“We are looking forward in 2020 or 2021 the firearms that will be decommissioned will be higher,” said Galvez. – Rappler.com