Sep 11, 2019 1:45 PM PHT
Pia Ranada
Facebook Twitter Copy URL
Copied
The 1521 Battle of Mactan and pre-colonial history will be the highlight of the Philippines' commemoration of the first circumnavigation of the world 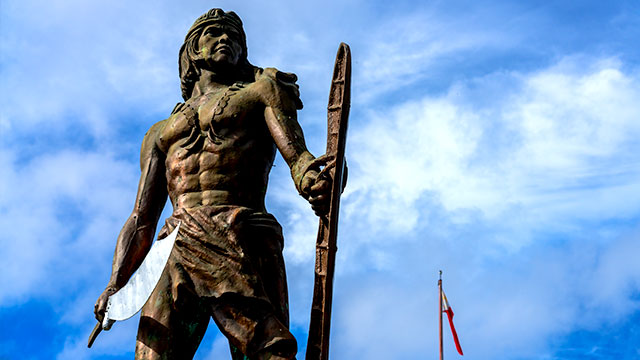 MANILA, Philippines – What do you know about the year 1521?

Most Filipinos, indeed most people, likely recall this as the year Portugese explorer Ferdinand Magellan “discovered” a group of islands that would one day be called the Philippines.

This is exactly the history lens the Philippine government wants to change with the way it commemorates the quincentennial or 500th anniversary of the first circumnavigation of the world.

Instead of highlighting this “euro-centric” view of history, the National Quincentennial Committee (NQC) formed by President Rodrigo Duterte, will highlight Lapulapu, ruler of Mactan Island in Cebu, who resisted the Spaniards.

“Lapulapu represents how gallantry and the spirit of freedom determined our destiny and history,” said Karl Fajardo of the Presidential Communications Operations Office (PCOO), a member of the committee.

He and other NQC members were presenting planned activities for the quincentennial celebration to stakeholders on Tuesday, September 10, in Makati City.

The NQC, through events it will hold from 2019 to 2021, want to tell the story of “one of the least appreciated, least studied heroes in our history,” Fajardo added.

Thus, instead of focusing on Magellan’s feat, the Philippines will highlight the Battle of Mactan on April 27, 1521, when Lapulapu’s warriors fought the Spaniards and killed Magellan.

It will also highlight how early Filipinos cared for and fed the sickly and tired Spanish crew upon their arrival, which Fajardo said gave a preview of the hospitality and friendliness Filipinos would be known for.

What’s the quincentennial all about? The quincentennial commemoration spans 2019 to 2021, corresponding to the years 1519 to 1521 when the Magellan-Elcano expedition was completed. This expedition, planned by Magellan but completed under the leadership of Juan Sebastian Elcano, Spanish captain of the ship Victoria, was the first to go around the world.

The government also wants to highlight the Philippines’ pre-colonial history, a time period riddled with blank pages because of the dirth of primary accounts about early settlers of the islands we now know as the Philippines.

“We want to reflect Filipino or Asian perspectives pursuant to the pronouncements of President Rodrigo Roa Duterte to celebrate our ancestors and not colonialism,” said Escalante.

As President, Duterte has sought to promote Lapulapu, saying many Filipinos are familiar with heroes from Luzon but not from the Visayas, where Duterte himself was born. Duterte declared April 27 as Lapulapu Day and created a set of awards named after the hero, the “Order of Lapulapu.”

What events will be held? From 2018 to 2019, the NQC had been given some P17 million for its activities. Escalante said the NQC had so far spent some P10 million. For 2020, the Duterte administration is asking for some P100 million, an allocation which must still be approved by Congress.

Here’s what the NQC is planning:

Lighting of landmarks on December 14, 2019 – 21 historic sites, monuments, and landmarks all over the country will be lit at 7 pm to begin the 500-day countdown to April 27, 2021, the 500th anniversary of the Battle of Mactan. The quincentennial theme song will be introduced to the public.

Balangay expedition – Also on December 14, recreated ancient balangays will sail from Butuan City, site of a precolonial kingdom, to visit different parts of the country until 2021.

Opening of Philippine Pavilion at 2020 Dubai World Expo – The pavilion, with the theme, “Reset the Filipino mindset,” will showcase Filipino heritage, especially pre-colonial history. It will be open from October 2020 to April 2021.

Opening of Museum of Philippine Early History in Butuan City – The event marks the start of the 100-day countdown to April 27, 2021.

April 27, 2021 events – On D-day itself, there will be simultaneous flag-raising in various government buildings and public spaces dedicated to Phlippine heroes. The “Quincentennial National Park” will be inaugurated and a civic-military parade held. Lapu-Lapu City in Cebu is also thinking of staging a reenactment of the Battle of Mactan.