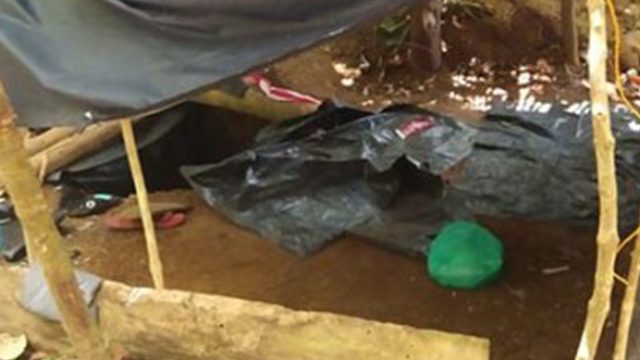 Facebook Twitter Copy URL
Copied
(UPDATED) Nanz Sawadjaan, nephew of Hatib Hajan Sawadjaan, is killed in a firefight with government troops. His death is a 'great loss' to the Abu Sayyaf Group, says the military.

A heavy firefight broke out between soldiers from the Philippine Army’s 41st Infantry Battalion and around 40 ASG members led by Almujer Yadah, Ben Tattoh, and Apo Mike in Sitio Tubig Pansol, Barangay Langhub, Patikul, Sulu, at 11:39 am on Tuesday, September 10.

The battle went on for about 20 minutes until the ASG “scampered and ran off in different directions,” the Westmincom said.

Government troops then overran the ASG encampment and found a body, which soldiers identified as Nanz Sawadjaan, the younger brother of ASG bomb expert Mundi Sawadjaan, and nephew of ASG subleader Hatib Hajan Sawadjaan, who is said to be the leader of the Islamic State (ISIS) in the Philippines.

Major General Corleto Vinluan, Jr, commander of the AFP’s Joint Task Force Sulu, called Nanz Sawadjaan’s death “a great loss to the Abu Sayyaf,” adding that “his demise will debilitate the current strategy employed by the group in creating havoc in the province.”

Government troops recovered an AK47 automatic rifle from the scene.

Two soldiers were wounded in the encounter.

The younger Sawadjaan was one of ASG’s bomb experts and his death “is a great loss to the Abu Sayyaf,” said Major General Corleto Vinluan, Jr, commander of Joint Task Force Sulu, whose mission is to hunt the ASG down.

“[Nanz Sawadjaan’s] demise will debilitate the current strategy employed by the group in creating havoc in the province,” Vinluan added.

Government troops recovered an AK47 automatic rifle from the scene.

Two soldiers were wounded in the encounter.

On Monday, Westmincom chief Lieutenant General Cirilito Sobejana said the ASG was behind the recent series of “suicide bombings” in Sulu, including the one in Indanan town on Sunday, September 8, in which only the attacker was killed.

Fatal bomb attacks have rocked parts of Western Mindanao since July 31, 2018, when a van exploded at a military checkpoint in the outskirts of Lamitan, Basilan, killing at least 10 people.

On January 27 this year, twin blasts at a Catholic cathedral in Jolo, Sulu, killed at least 23 people. Another twin attack killed at least 7 people at the gates of an Army camp in Indanan, Sulu, on June 28.

The military said the incidents were suicide bombings by foreign terrorists, except the first Indanan attack in which one of the attackers was Filipino. All were attributed to the pro-ISIS ASG faction led by the older Sawadjaan.

The Westmincom is tracking down two more “caucasian-looking” terrorists who were among 5 tasked with suicide bombings, Sobejana said. The first 3 were killed in the recent attacks.

Military information so far indicates the two suspects are at large in Sulu, and the Westmincom aims to contain them within the area, Sobejana added.

The ASG has been the subject of “focused military operations,” after President Rodrigo Duterte ordered the military to stamp out the terror group by the end of 2019 – a tall order, the Westmincom chief admitted.

“The successful operations of our troops are also attributed to the local community who feeds information, directing our troops to the terrorists’ location,” Sobejana said on Wednesday. – Rappler.com