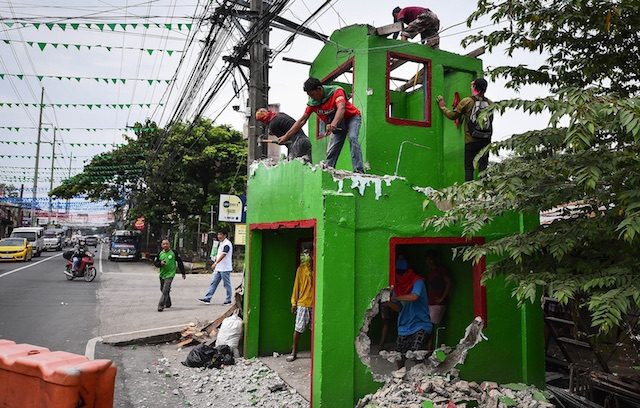 Facebook Twitter Copy URL
Copied
(UPDATED) The DILG gives the reminder following reports that MC 121-2019 was being used 'to remove century-old trees, demolish waiting sheds that do not obstruct sidewalks, and even structures in private lots without notice and just compensation'

MANILA, Philippines (UPDATED) – With a little over a week before its deadline on the removal of road obstructions nationwide, the Department of the Interior and Local Government (DILG) reminded local officials that the directive should not be used for road widening purposes.

“We wish to emphasize that the purpose of MC 121-2019, in compliance with the directive of the President, is to ‘return to public use, all public roads and sidewalks that have been appropriated for private use.’ In other words, it is for purposes of returning to the public the use of all public roads and it should never be used for road-widening purposes,” Interior Secretary Eduardo Año said in a statement on Thursday, September 19.

The DILG said Año was prompted to issue the clarification after he received reports that Memorandum Circular 121-2019 was being used for purposes other than intended, including cutting century-old trees along the roadside.

“DILG Secretary Eduardo M. Año said that they received reports from La Union, Northern Samar, and other parts of the country that MC 121-2019 was allegedly being used by contractors of the DPWH and some Local Government Units (LGUs) to remove century-old trees, demolish waiting sheds that do not obstruct sidewalks, and even demolish structures in private lots without notice and just compensation,” the DILG said.

“For example, the taking by government of private property for road widening purposes requires expropriation proceedings and the payment of just compensation after due notice and hearing,” he said.

Over the past weeks, concerned citizens in La Union and other areas have protested the cutting of century-old trees along the roadside, even when these were not seen as road obstructions.

In Agoo town, public clamor prompted local officials to suspend the plan to cut more trees – cited then as part of efforts to remove road obstructions – along the national road last week.

The DILG had earlier imposed a September 29 deadline on the removal of road obstructions, as ordered by President Rodrigo Duterte in his State of the Nation Address.(IN NUMBERS: How local governments fare halfway DILG-ordered road clearing)