Sep 24, 2019 9:48 PM PHT
Facebook Twitter Copy URL
Copied
It would have been Duterte's sixth change-of-command rites as Commander-in-Chief. His pick for AFP chief, Noel Clement, vows to pursue his order to end the communist insurgency. 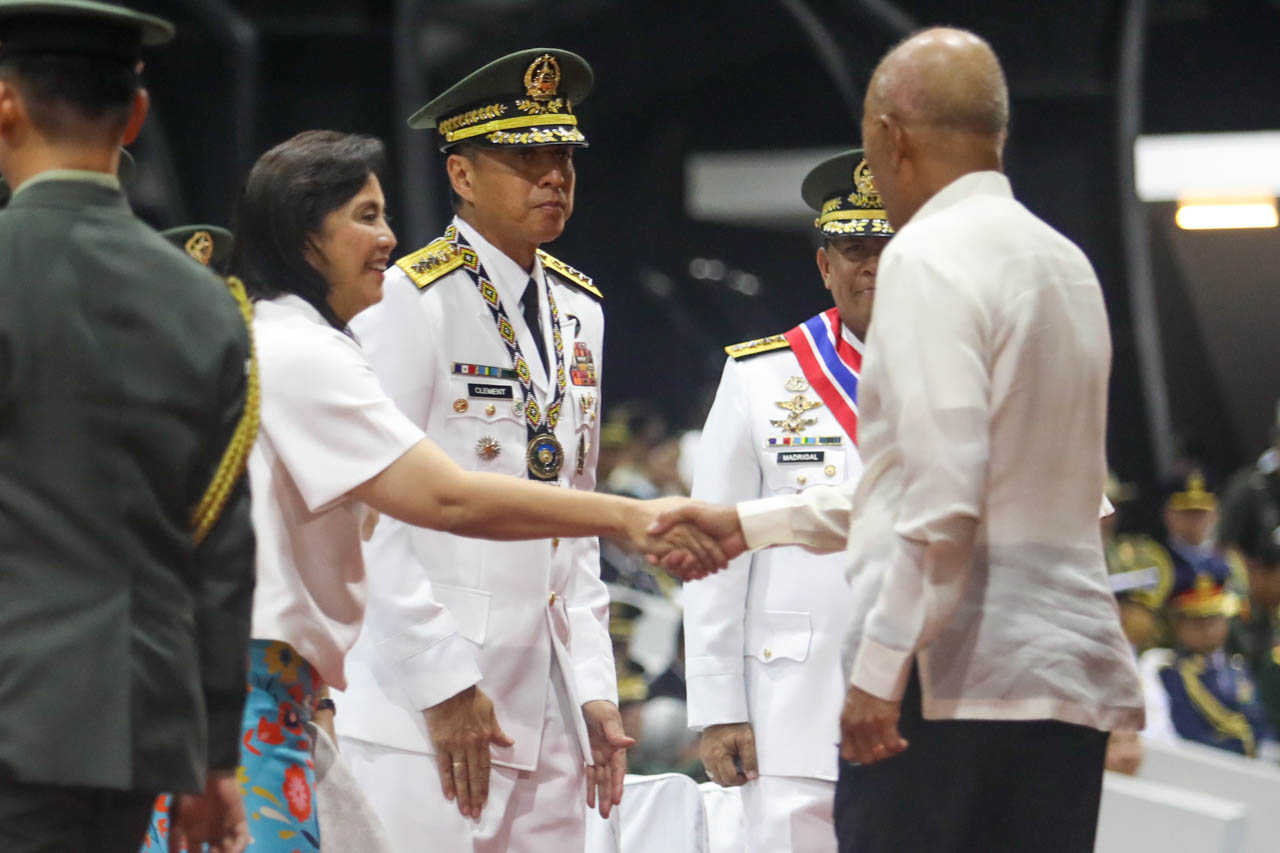 MANILA, Philippines – For the first time in his term, President Rodrigo Duterte skipped the change-of-command ceremony for the new chief of staff of the Armed Forces of the Philippines (AFP) on Tuesday afternoon, September 24.

The ceremony began shortly after 4:30 pm with arrival honors for Lieutenant General Noel Clement, who is to take over the AFP’s top post from General Benjamin Madrigal Jr, who is retiring.

After Clement inspected the troops, the ceremony went into a lull to wait for Duterte’s arrival. Then, at around 5 pm, a voice over announced that Defense Secretary Delfin Lorenzana would represent the President who could no longer grace the occasion.

“The punishing schedule of official and social events of the previous days has slightly affected his body temperature. He opted to rest so he can be his usual healthy self in no time,” Presidential Spokesperson Salvador Panelo said in a message to reporters, explaining Duterte’s absence.

Clement is the sixth chief of staff under Duterte, who had attended all previous change-of-command ceremonies.

Duterte’s last public event was on Thursday, September 19, when he attended the decommissioning of firearms and troops of a communist rebel faction in Capiz.

Over the weekend, he had some social engagements, including the baptism of Marinduque Representative Lord Allan Velasco’s daughter in Manila.

On Monday, September 23, or the day before the AFP change-of-command ceremony, Duterte was one of the guests of a surprise birthday party for Panelo arranged by the spokesman’s family in Taguig. The President stayed up late for the occasion.

After the ceremony, Panelo told reporters that Duterte left his party “early,” at around 11 pm.

“Like a normal mortal, he is subject to fatigue and everything,” the Presidential spokesman said, adding, “in fact he was preparing to come. ‘Yung huli kong na-receive na text, coming na siya (The last text I received said he was already coming).”

During the ceremony, Lorenzana read out a prepared speech from Duterte, who, as Commander-in-Chief of the Armed Forces, congratulated Madrigal for the capture and surrender of communist rebels, and urged Clement to continue the administration’s push to end the communist insurgency.

Clement knew his marching orders, and in his speech he mentioned Duterte’s Executive Order No. 70 – aimed at ending the local communist armed conflict – as one of his top priorities as military chief.

“On our operational engagements, we will remain committed to ending armed insurgency. Similarly, our focused operations will be sustained and surgically conducted on those who threaten the peace in our communities,” Clement said.

“The enemies of peace will be dealt with accordingly…. Therefore I enjoin the remaining peace spoilers to work with us,” he added.

Before being appointed chief of staff, Clement was chief of the AFP Central Command in the Visayas, where he led the government’s campaign against the Communist Party of the Philippines-New People’s Army (CPP-NPA).

A series of assassinations of people with alleged links to the CPP-NPA in Negros Oriental last July aroused speculation as to whether Clement would recommend placing the province under martial law. He declined, saying the situation was “still manageable.”

Clement has led military troops in Luzon and in central Mindanao, where he was credited with reducing the number of active CPP-NPA fronts.

As the commander of an Army battalion in Bulacan, Clement was tagged in the disappearance of communist leader Jonas Burgos, but was cleared of charges for lack of evidence.

“Under my watch, the AFP will remain professional, non-partisan, a staunch defender and advocate of human rights, respectful of international humanitarian law, but at the same time assuring the rule of law,” Clement said.

Clement will be AFP chief until January 2020 when he turns 56, the mandatory age of retirement from the military service, although Duterte may opt to extend his term. – Rappler.com