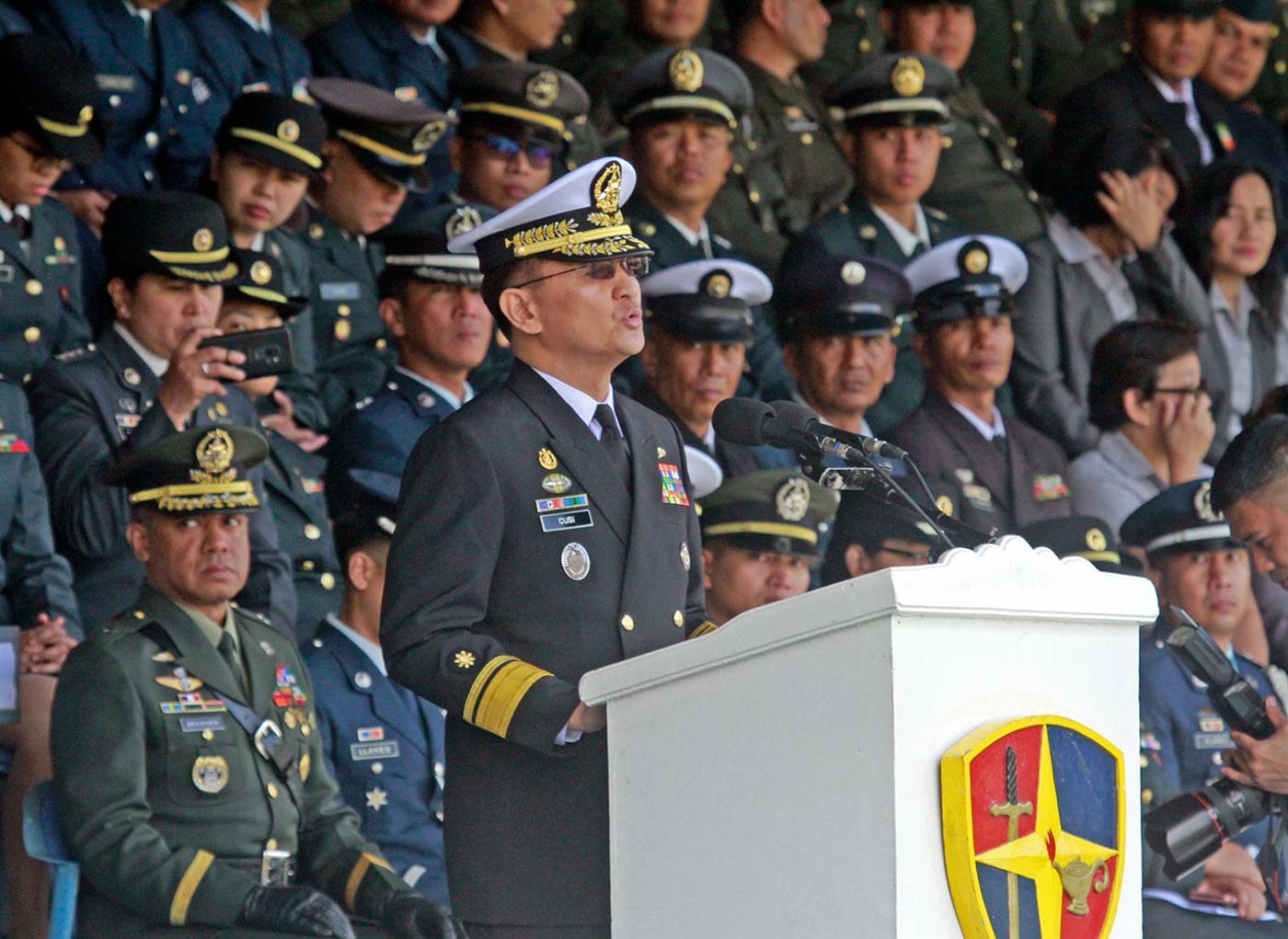 MANILA, Philippines – It was a sobering Tuesday morning, October 1, at the Philippine Military Academy (PMA) campus in Baguio City, as its corps of cadets, minus one, welcomed their new superintendent.

The last two weeks have exposed the otherwise secretive institution to public scrutiny, ever since Cadet 4th Class Darwin Dormitorio, a 20-year-old plebe, was found dying in his dormitory at Fort General Gregorio del Pilar on the morning of September 18.

That they were welcoming Rear Admiral Allan Cusi to replace Lieutenant General Ronnie Evangelista was a result of the controversy that had befallen the academy: a cadet had died in the hands of his fellow cadets.

Cusi was reaping the grim fruit of his own failure, he told the cadets as he took the rostrum. He was a tactical officer in the academy from 1994 to 1996, and then chief of academy staff from 2013 to 2014. Even then, he had tried to end the “culture of entitlement” among cadets and alumni, only to be scorned for what seemed a ludicrous idea.

“Malayong mangyari ‘yan kasi ‘yan ay maituturing na weakness (That probably won’t happen because that can be considered weakness),” a fellow officer once told Cusi when he broached the idea of instilling a “culture of humility” in the academy.

If cadets were to graduate and become military or police officers, troops under their command must not sense any weakness in them, not even a whiff, Cusi recounted his fellow officer’s reasoning as he addressed the cadets.

So the tradition of “demanding respect” from one’s juniors and “glamorizing maltreatment” went on, Cusi said, and now a cadet with earnest dreams of becoming a soldier has died trying to cater to his seniors’ whims.

Following prestigious postings as vice commander of the Philippine Navy and chief of the Naval Education, Training, and Doctrine Command, Cusi is back in the PMA as its superintendent, and he is taking another shot at the reforms he had long envisioned for the academy.

A change must find its way to the cadets’ hearts, he said, but it must begin with the academy’s alumni and the leadership of the Armed Forces of the Philippines (AFP) itself.

Cusi wants PMA alumni to treat cadets with respect, and not to boss them around or speak harshly to them as many are wont to do.

He disagrees with how PMA alumni glorify their own suffering “during their time,” making cadets feel inferior because “they have no idea” of how terrible their ordeals had been back in the day.

Of course, soldiers need to be tough, but it does not mean they need to be heartless.

“Being a good soldier and a good leader requires more than endurance and tolerance of pain. Rather, the yardstick we must employ is one that is anchored on principle, sense of justice, and love of and service to our country and to our fellow Filipinos,” Clement told the cadets during the ceremony.

The cadets and officers responsible for Dormitorio’s death have been sanctioned. Criminal cases are being prepared against them. The academy and the military itself are making efforts to show action. Evangelista resigned a week after the incident, along with Brigadier General Bartolome Bacarro, commandant of cadets, who has been replaced by Brigadier General Romeo Brawner Jr.

Early on, the PMA promised reforms in its policies, processes, and the way it provides health care to cadets.

A physical examination of all plebes was ordered, and a few were found bearing signs of hazing on their bodies, Brawner said in a recent media interview.

Part of the problem is that victims refuse to speak up, for fear of reprisals from the perpetrators, or of being seen as weaklings or squealers.

In the wake of Dormitorio’s fatal hazing, the academy has had to explicitly say that admitting to having endured or perpetrated hazing is part of the cadets’ “honor system” of never lying, cheating, or stealing.

“If the 4th class cadet was found to have been sick, the upperclassmen or the tactical officers can directly ask the plebe if he was hazed so he can answer,” PMA Assistant Superintendent Brigadier General Nestor Florente Rayos told Rappler on Monday, September 30.

“Before, cadets had the option not to squeal…. So with this honor system, that’s gone. They can be directly questioned by the tactical officers,” Rayos added.

Complete honesty has always been part of the honor system, Clement told Rappler on Monday, but what has changed is that tactical officers are now encouraged to ask cadets directly whether they experienced or carried out hazing. Cadets who deny even their own suffering would be guilty of an honor code violation.

In other words, the cadets have been told it is not wrong to tell the truth.

Most, if not all, of the military and police top brass are and have always been PMA alumni. It makes for the academy’s prestige, and the reason thousands of young men and women aspire to join it every year.

Despite widespread public condemnation of hazing, which the law considers a crime, some PMA alumni have spoken rather proudly of it.

Oscar Albayalde and Ronald “Bato” dela Rosa, current and former national police chiefs, have both said hazing “molded them” into the persons they are today.

Albayalde currently faces accusations of trying to protect his underlings who were once suspected of dealing in illegal drugs.

Dela Rosa, now a senator, had sought power to grant the early release of convicts from prison during his stint as Bureau of Corrections chief.

Both police generals implemented President Rodrigo Duterte’s war on drugs that has killed at least 20,000 people, according to rights groups, either on unproven suspicion of drug dealing, or as mere “collateral damage” in police raids.

Cusi, a member of PMA Class of 1986, said he was lucky to have “survived with his skin” his time as a plebe in the academy, and that he fought the urge to maltreat the new batch of plebes when he became a yearling.

He said Clement, his upperclassman from PMA Class of 1985, never “manhandled” or maltreated him.

The new PMA chief insists there are many others like him and Clement who do not believe in hazing, just that they had to keep quiet because of the prevailing culture at the time.

But now, Dormitorio’s death has forced the matter into the open, and the consensus in the academy and in the military is that hazing must stop.

“We do not need fanfare, glitz and glamor, you know, to reach out to the cadets. You don’t need that. What the cadets need to see is there is a sincere desire from your end to really improve him, to really shape him, right?” Cusi said. – Rappler.com