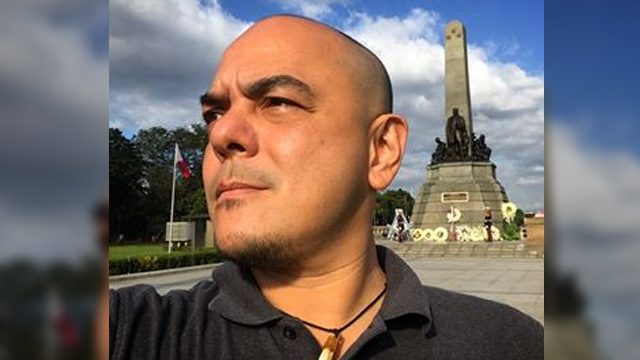 Tesa said in a Facebook post that Celdran, who had been living in Madrid, Spain, since January of this year, died of natural causes. (READ: Carlos Celdran: Activist, performance artist)

Celdran had lived in Madrid since late January 2019, 5 months after the Supreme Court (SC) upheld the decision of the Court of Appeals that found him guilty of “offending religious feelings.” Celdran faced a minimum prison time of 2 months and 21 days, and maximum of 1 year, 1 month, and 11 days. The decision was on appeal when he left for Madrid.

Lay Catholics had filed a blasphemy case against Celdran after he disrupted a service at the Manila Cathedral on September 30, 2010. Clad as the Filipino national hero Jose Rizal, the outspoken reproductive health advocate held up a sign with the words “Damaso,” in reference to the villainous priest in Rizal’s famous novel Noli Me Tangere.  (READ: Church says it’s not behind Celdran case)

Human rights advocates had slammed the court decision against Celdran as a setback to freedom of speech in the Philippines, which is supposed to be a bastion of democracy in Asia.

The case prompted Celdran to move to Madrid, where he gave walking tours he called “The Jose Rizal Walking Tour of Madrid.” In Manila, Celdran was known for his walking tours in Intramuros as well as his perfomance art.

His last Facebook post was at 4:48 am on Monday, October 7 – his comment on news quoting President Rodrigo Duterte as saying he suffered from a rare muscle disease, myasthenia gravis.

Celdran’s friends, supporters, and various personalities extended their condolences to his family and posted mini-tributes to him on social media.

Vice President Leni Robredo thanked Celdran for his contributions to raising Filipinos’ awareness in relation to Phiippine culture and history.

My deepest condolences to the family and friends of Carlos Celdran. I will always be grateful for his support and appreciative of his contributions to raising the awareness of our fellow Filipinos regarding our history and culture. He will be missed.

In a post on Twitter, Senator Risa Hontiveros recalled how Celdran helped in pushing for the reproductive health law and women’s rights.  – Rappler.com