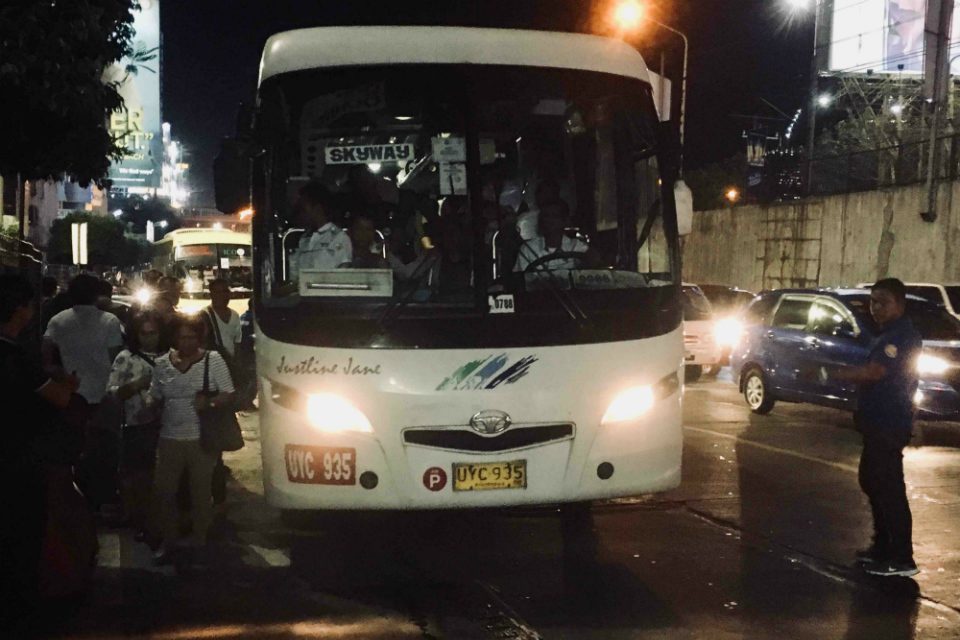 Facebook Twitter Copy URL
Copied
Of the 109 city buses which committed to the augmentation initiative, only 69 have been fielded as of October 9

MANILA, Philippines – The Land Transportation Franchising and Regulatory Board (LTFRB) will soon demand bus companies to deploy the required number of units to transport commuters affected by the shutdown of 3 Light Rail Transit line 2 (LRT2) stations.

The agency said it would prepare a memo after lawmakers expressed concern on Wednesday, October 9, over the failure of bus firms to honor its commitment to service the Santolan-Katipunan-Anonas route by virtue of special permits issued by the LTFRB. (WATCH: LIVE: House hearing on LRT2 Santolan station incident)

During the House committee on transportation emergency hearing on Wednesday, chairman and Samar 1st District Representative Edgar Sarmiento pointed out that, to service the 200,000 daily ridership of the LRT2, 4,000 buses would be needed. This was equivalent to 400 buses plying the affected route per hour.

However, the LTFRB revealed that of the 109 city buses which got the special permit to divert from their original franchise, only 69 had been as of Wednesday, October 9.

LTFRB Board Member Antonio Gardiola Jr said that bus companies were already contacted and mobilized on Friday, October 4, but the routes were adjusted and special permits were given according to these routes on Monday, October 7.

Sarmiento showed dismay at the small number of buses that were actually deployed, saying bus companies should have the initiative to serve the public in a time of need.

“‘Pag ika’y may-ari ng bus, ang intention po ninyo ay tulungan ang publiko sa panahon ng emergency,” Sarmiento said. (If you own a bus, your intention should be to help the public during a time of emergency.)

Department of Transportation (DOTr) Undersecretary Mark de Leon said that, although bus companies committed a number of buses to the augmentation initiative, they would only deploy a few of them with the excuses like the buses are affected by the color-coding scheme or they lack drivers who are familiar with the route.

Sarmiento doubted these excuses, saying drivers could familiarize themselves with the route during night time.“‘Wag namang gawing dahilan. Nakakainsulto sa lahat,” he said, calling attention to how the commuting public is in immediate need of alternative modes of transport. (They shouldn’t make it an excuse. It’s insulting to all of us.)

In response, Gardiola said they would issue a memorandum circular to demand bus companies to do their part. Of the 4,639 city buses, only 23% committed buses for the augmentation of LRT2 services, and only a few of them were eventually deployed

De Leon said the consolidation of fleets would be necessary, since the bus and jeepney sector is very fragmented. He pointed out how some companies only have 10 to 15 buses on their fleets.

He then said the transport agency is eyeing only two consortiums for all city buses. “Moving forward, these 4,000 city buses will be consolidated into one to two consortiums to provide the efficiency and level of service expected of them,” De Leon said.

Sarmiento said these bus companies might be afraid of incurring losses, thus asking the DOTr if it was possible to provide subsidies.

De Leon said that there was no budget for lease agreements with bus companies.

The LRT Authority estimates that the shutdown of the 3 stations affected by the October 3 fire would last for 9 months. – Rappler.com

Read other stories from the October 9 House hearing: