Oct 19, 2019 10:51 AM PHT
Rappler.com
Facebook Twitter Copy URL
Copied
'His example inspires us to be patriots each day of our lives and to do what is right in the face of adversity,' says former top diplomat Albert del Rosario 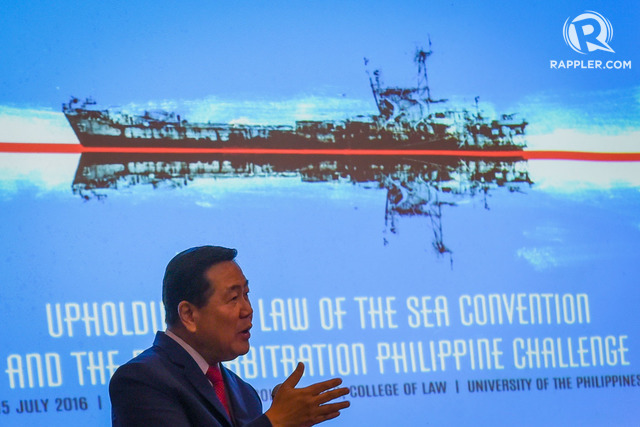 MANILA, Philippines – Filipinos owe an “incalculable debt of gratitude” to retiring Senior Associate Justice Antonio Carpio for his staunch defense of the Constitution and Philippine sovereignty during his time in the Supreme Court.

Former foreign secretary Albert del Rosario made the statement – an opinion shared by many – in his speech at the testimonial lunch given by various groups for Carpio, who is set to retire on October 26. (READ: ‘The best chief justice we never had’)

“Our country owes an incalculable debt of gratitude to Justice Carpio. We salute and proffer to him our deepest trust and highest esteem,” said Del Rosario at the joint membership meeting of the Makati Business Club (MBC), the Management Association of the Philippines (MAP), the Judicial Reform Initiative (JRI), and the  Financial Executives Institute of the Philippines (FINEX) on Friday, October 18.

Del Rosario was foreign secretary when the Philippines brought China to court over the dispute in the West Philippine Sea. Carpio played a key role in the Philippines’ historic victory against China before the Permanent Court of Arbitration, which the Duterte administration has downplayed in exchange for loans and grants from Beijing.

“His acts of patriotism, though sometimes criticized as unwarranted, have proven to be invaluable to the country. His example inspires us to promote and protect the national interest and, as such, Justice Carpio fully deserves the respect, admiration and recognition from Filipinos like us who are gathered here today,” he said. (READ: Retiring Justice Carpio on Duterte’s tirades: ‘It comes with the territory’)

Del Rosario noted Carpio’s role as the “staunchest defender of our country’s maritime rights and entitlements under the United Nations Convention on the Law of the Sea (UNCLOS).”

He said that in 2011, during the previous administration which Del Rosario served as foreign secretary, Carpio “already anticipated that Beijing was embarking on a path of unilateral action to establish de facto control over almost the entirety of the South China Sea” and advised the government to bring China to an UNCLOS tribunal – a move that paid off.

Carpio had also given a world lecture in 2015, sponsored by the Department of Foreign Affairs, to present the Philippines’ position on the dispute with China before think tanks and universities in 30 cities in 17 countries. Weeks before his retirement, the magistrate gave another lecture, this time to SC employees, on the same subject.

“The success of the Philippines in its international arbitration case will stand forever as our nation’s contribution in defense of the rule of law in managing international relations,” Del Rosario said.

“Justice Carpio offers us a valuable lesson: Responsible members of the international community should always strive to manage their relations in a friendly manner whenever possible to the mutual benefit of all within a framework of international law and comity,” he added.

Del Rosario said that Filipinos should take comfort in Carpio’s assurance that he would continue his advocacy even after retirement, and hoped Carpio would inspire others to do the same. (READ: Carpio on West Philippine Sea: Every Filipino’s duty to defend PH territory)

“On the eve of his retirement in the Supreme Court, Justice Carpio has assured us that he will remain a strong defender of Philippine territory and maritime entitlements in the South China Sea.  As an extraordinary jurist, Justice Carpio is also a staunch defender of the Constitution, which serves to defend and protect the waters of the Philippines for posterity,” said Del Rosario.

“His example inspires us to be patriots each day of our lives and to do what is right in the face of adversity,” he added. (READ: The importance of integrity)

Del Rosario also reiterated the importance of asserting the Philippines’ rights over its waters. The Duterte administration has not made any earnest effort to assert in relation to the dispute with China, citing the latter’s military might and the economic gains the Philippines would get in exchange for not actively pursuing The Hague ruling.

“I am one with Justice Carpio in saying that we should not gamble our country’s waters on the uncertain prospects of monetary gain. Our waters not only belongs to us, but to our children and to generations of Filipinos yet unborn. As enshrined under our Constitution and as a matter of national honor, we Filipinos have a solemn duty to protect and preserve our country’s rights,” he said.

“As a self-respecting country, we owe it to ourselves not to sit back and let our fate be decided by other nations like China. As in the UNCLOS Case, we showed that we can take action on our own As Filipinos, we can devise creative and viable means to defend and preserve our national patrimony – including our West Philippine Sea – even in the face of a superpower like China,” Del Rosario added.