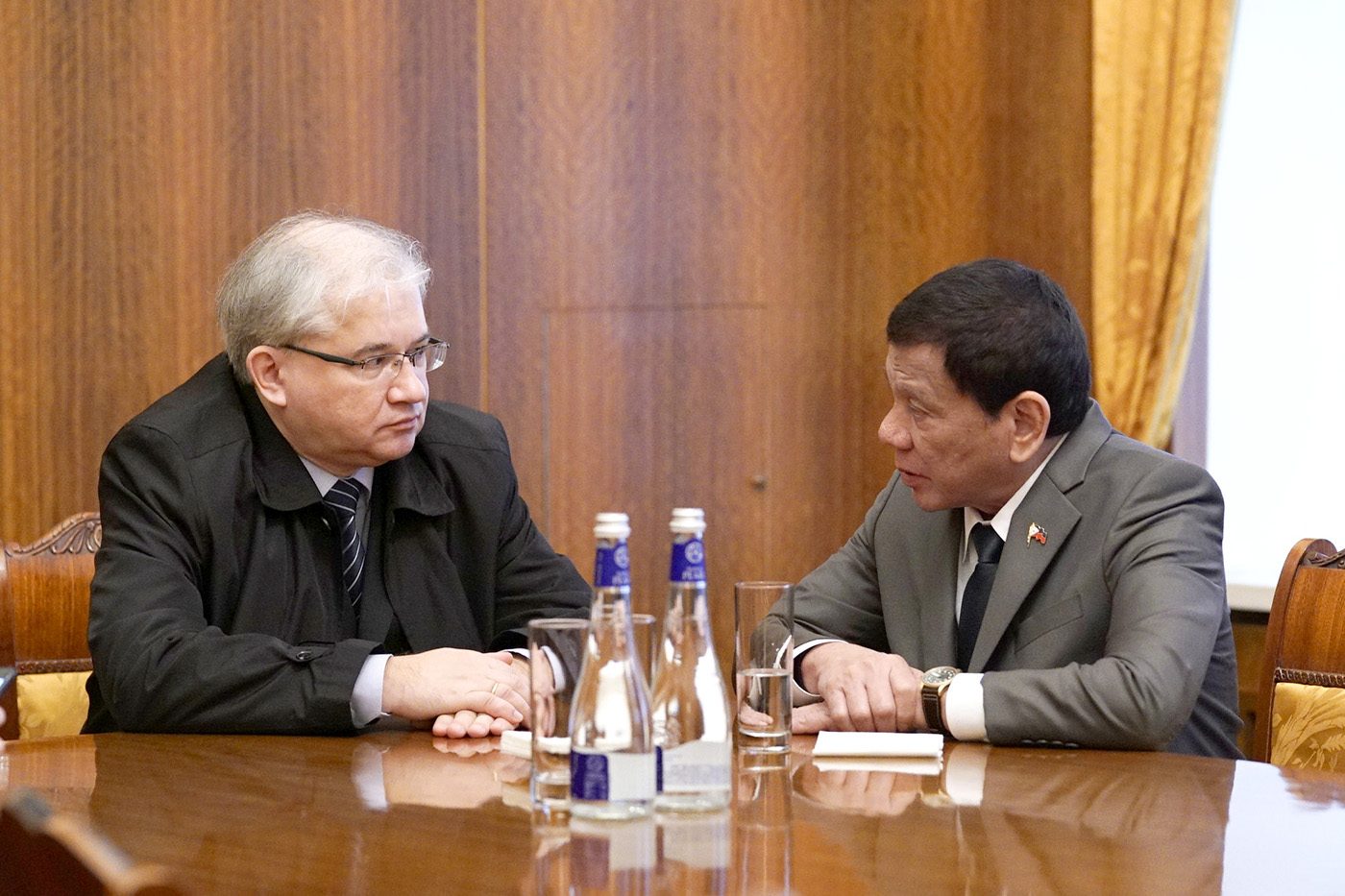 MANILA, Philippines – A team from Russian energy giant Rosneft arrived in Manila last week to discuss the possibility of joint offshore oil exploration with the Department of Energy (DOE), said Igor Khovaev, Russia’s ambassador to the Philippines, on Tuesday, October 22.

President Rodrigo Duterte had invited the state-owned Rosneft, the “largest global public oil and gas corporation” according to its website, to conduct oil and gas exploration in the West Philippine Sea and other parts of the Philippines.

Duterte met Rosneft CEO Igor Sechin and other company executives in Moscow on October 2, during the President’s second official trip to Russia. Rosneft was then asked to apply for a service contract with the DOE, Energy Secretary Alfonso Cusi told Rappler on October 9.

“Rosneft is very interested to establish a mutually beneficial cooperation with the Philippine partners,” Khovaev told reporters in a briefing at his residence in Makati City.

“A group of experts was sent by Rosneft to Manila to discuss it, to start discussing possible cooperation in this field,” the envoy added. He said the team was “probably still in Manila” on Tuesday.

Khovaev noted that the talks are exploratory, and that any joint exploration deal with the Russians are still “a long way because a lot of very specific aspects, issues should be studied very attentively and very carefully.”

The Philippines is looking to foreign capability to tap into what is believed to be vast oil and gas reserves in the West Philippine Sea. Russian participation in energy exploration underneath the waters of the politically contentious area is expected to be a game changer.

The Philippines has drafted a memorandum of understanding with China to develop oil and gas resources in the West Philippine Sea. Critics have flagged the deal because China claims sovereignty over much of the area.

Russia presents no similar impediment to a joint agreement.

Supreme Court Senior Associate Justice Antonio Carpio, who is set to retire on October 26, said he would welcome joint exploration in the West Philippine Sea with Russia, as the Philippines needs a diverse set of contract partners. He earlier said the deal with China is “safe” for the Philippines because it implies a recognition of Philippine sovereignty and sovereign rights.

Rosneft and other Russian oil companies currently operate in Vietnam, in waters also disputed by China. Although Beijing has issued its usual warnings against such operations, it has actually left them unhampered.

“We are not afraid of anyone but we value our good partnership with all other countries,” Khovaev said, adding that any activity with the Philippines will follow Philippine and international laws.

Khovaev pointed out the Philippines’ urgent need to develop energy sources to fuel its fast-developing economy, and said Russia is willing to do more than offshore energy exploration.

“We are ready to supply power energy resources to your country. We’re ready to build new power plants based on coal, based on gas, based on nuclear technologies if you want, if you are ready, based on renewables. Any option is possible,” the Russian envoy said. – Rappler.com